The range is comprised of two 40W combos (a 1x12 and a 2x12) and a 100W head designed to be connected to a separate speaker cabinet. The analogue portion of each amp uses a pair of 12AX7 tubes for preamplification  — (which creates various flavours of distortion) and 6L6 tubes (two for the combos, and four for the head) in the output stage. All three amps have 16 basic models to choose from, with overdrive levels ranging from ‘clean’ to ‘insane’, and covering most levels in between.

There are 20 on-board effects to choose from, including delay, modulation and reverb. Less traditional are the ‘Smart Harmony’ effect, which can harmonise in a scale above or below the note you play, and a digital looping facility. Four effects can be used together in any one patch, and each amplifier can store up to 128 user presets. These new Line 6 amps could be of use to studio owners who want a wide variety of tones from one unit, as well as guitarists who like to switch sounds regularly. 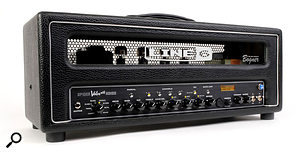