It’s easy to dismiss many iPhone Apps as being frivolous or gimmicky, but here’s one that is genuinely useful: the Line 6 MIDI Mobilizer is a simple MIDI interface that plugs into the bottom of your iPhone and iPod Touch, supported by the free MIDI Memo Recorder app (downloadable from the Apple Apps Store) to allow the basic recording, playback and cataloging of MIDI data streams. Breakout leads on the interface provide standard five-pin DIN MIDI in and out connections. 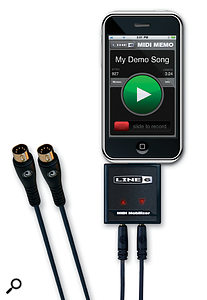 You could use the iPhone and iPod touch as simple MIDI recorded to capture ideas or, as Line 6 call them, ‘MIDI Memos’, without having to boot up your sequencer — but it has many more practical uses. For example, you could carry SysEx dumps of all your favourite MIDI instrument sounds so that you can load them into synths when you’re working in studios other than your own, or you could store MIDI lighting cues for use at gigs. You can even use it to play GM MIDI files into a GM module to provide live backing tracks. Each MIDI recording can be named, and listed MIDI Memos can be called up, rearranged or deleted at will. Info on file size, date and so on is also included.

The user interface comprises one slider and two buttons. Simple transport functions cover the expected Play, Pause, and Stop; once in Record, all MIDI data received on all 16 channels, as well as all SysEx data, are time-stamped and stored to a precision of one millisecond, so there’s nothing really to set up or adjust. MIDI Mobilizer isn’t a multitrack MIDI sequencer, however, so operation is strictly point and shoot. You can also use the App to email MIDI files from your iPhone in SMF format, or even access your MIDI Memos over WiFi or from the Web via a unique URL with optional authentication to prevent unauthorised access.