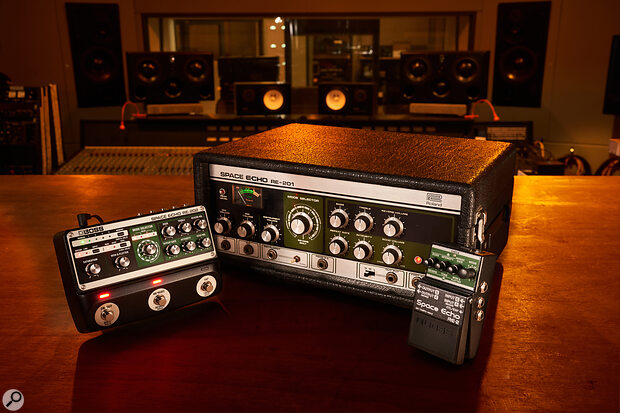 Roland's classic RE-201 Space Echo is as popular as ever, but with prices skyrocketing they remain out of reach of most. Back in 2007, Roland's guitar-oriented sub-brand Boss brought out a digital recreation in the form of the RE-20 twin-pedal stompbox, and now they've done it again, with not one but two new Space Echo emulation pedals.

The RE-202 is a three-footswitch stompbox that matches the look and feel of the real deal, including its 12-way mode selector rotary switch. Additions to the RE-201's features include a doubling of the maximum delay time, an additional delay tap, adjustable wow & flutter, and the ability to select different emulated tape 'ages', for varying degrees of repeat degradation. It's also a true stereo device, capable of working with both instrument- and line-level signals.

Users can select between two behaviours when the unit is bypassed: either 'straight through', in which the input is unaffected, or with preamp emulation, where even with the unit bypassed, the signal still gets some character from the input stage. External footswitch and expression pedal control is catered for, as is MIDI.

Next up is the RE-2, which packs its RE-201 emulation into the iconic Boss pedal format. This model offers 11 modes and just three virtual tape heads (as on the original), but like the larger RE-202 you can still apply the tape delay and spring reverb effects on their own, should you wish. And, impressively given its size, it's still a true stereo device. Users can select the delay tail behaviour when bypassing the pedal, and tap tempo is performed with the 'hold then tap' routine familiar from Boss's other delay pedals.