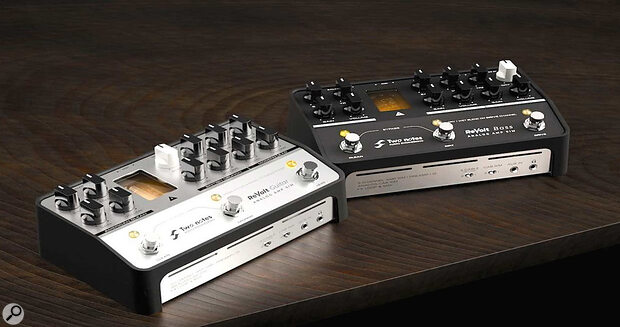 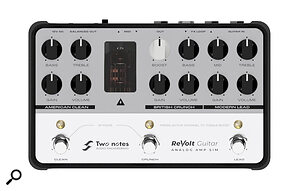 Two Notes ReVolt Guitar amp simulator pedalBoth pedals follow the same format and layout with the top panel divided into three separate channel sections, each activated via a footswitch and equipped with their own Gain and Volume controls. Channel one has its own dedicated two-band EQ, whilst channels two and three share a three-band EQ between them. An additional knob provides an adjustable boost function on the ReVolt Guitar, with the ReVolt Bass featuring a Dry/Wet control for blending the high-gain channel with the DI signal. 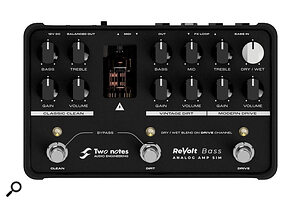 Two Notes ReVolt Bass amp simulator pedalA balanced DI output with switchable cab simulation allows the pedals to be connected directly to a PA system or recording rig, whilst an instrument level output and effects loop connections provide versatile integration options with existing amp setups. A Four-Cable Method switch allows users to route an amps effects send to the pedals input, essentially adding three additional channels to their amp, or the ReVolt’s output can be run into an amps’ effects return to bypass the preamp section in favour of the ReVolt’s.

The ReVolt pedals will make their public debut at NAMM 2022. They are available for pre-order through stockists and directly from the Two Notes website now, with shipping expected in September 2022. Both are priced at $399£349 Including VAT.