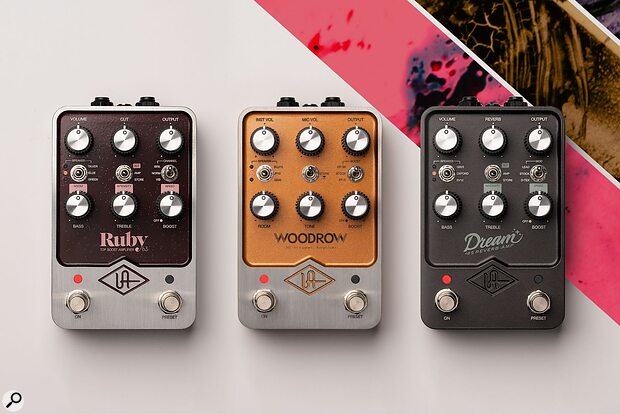 Dream '65 Reverb Amplifier - The essential American tube amp used by the Beatles, Muddy Waters, Elvis Costello, and countless others for more than 60 years.

Ruby '63 Top Boost Amplifier - The iconic UK valve amp that defined the sound of the British Invasion, beloved by Queen, Radiohead, and U2.

Woodrow '55 Instrument Amplifier - The legendary tweed tube amp that started it all, beloved by Neil Young, Chuck Berry, and The Eagles.

The pedals provide users with multiple modelled speaker and cabinet options, emulations of custom boosts and circuit mods, as well as recreations of tube reverb and vibrato effects found in the original amplifiers. The ability to dial in speaker cabinet, mic and room tones is also available courtesy of technology from UA’s award-winning OX Amp Top Box. Each model can be used in Live or Preset mode, with the former reflecting the front panel settings, and the latter recalling a saved tone.

All of the models in the range have a pair of inputs and outputs, and are capable of running either in stereo, mono, or in a four-cable mode which reconfigures the inputs and outputs to provide some useful functionality to users of amps equipped with an effects loop. When this mode is enabled and the pedal is in bypass, the guitar signal is fed straight to the amp’s input. When active, the pedal’s output is routed to the amp’s effects return, allowing players to bypass their amp’s preamp in favour of the UAFX.

A control app for iPhone and Android devices provides users with the ability to personalise footswitch functions, save and recall presets, activate the four-cable mode, and download tones used by pro guitarists including Tim Pierce, Nels Cline, Cory Wong and more.

Audio connectivity is provided via the usual quarter-inch jacks, with USB-C present for firmware updates, and Bluetooth is built in to provide a connection with the control app.

SOS's resident guitar expert Dave Lockwood has been putting all three of the new pedals through their paces, crediting them with providing “some of the finest, most detailed and, above all, most playable emulations of a recorded amp sound" he's ever heard. The full in-depth review is available online now and will be published in the coming July 2022 print/app editions of Sound On Sound.

All three pedals are available now, priced at $399£345 including VAT. More information and audio examples is available from the Universal Audio website.