Universal Audio have teamed up with Swiss audio experts Studer to offer users of the UAD2 DSP platform an emulation of Studer’s classic A800 multitrack tape recorder.

The Studer A800 plug-in — “the world’s most accurate representation of professional analogue tape recording”, according to UA — features a classy-looking user interface based on a top-down view of the original machine. The main page features controls for input and output gain, IPS (which adjusts tape speed: there are positions for 7.5, 15 or 30 inches per second, or ‘Off’, which bypasses the plug-in), and Cal and Tape selectors. Cal chooses between one of four reference levels, while the Tape knob selects between different tape formulae: 250, 456, 900 or GP9. These two controls work interactively. Different Tape settings have recommended reference levels, but non-standard levels can be used in order to raise or lower the amount of headroom — and, by extension, the point at which the tape saturates. 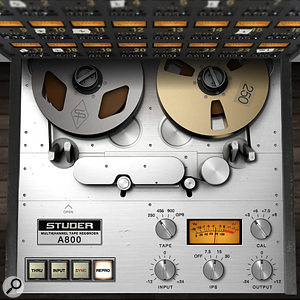 Four buttons on the bottom left of the interface model the different signal paths available on the A800. Thru bypasses the effect, in exactly the same was as the ‘Off’ setting on the IPS control does. Input emulates the original unit’s live monitoring mode, and doesn’t impart any tape artefacts; only those of the recorder’s electronics. Sync models the sound coming off the record head, while Repro recreates the sound of audio coming into the tape machine, onto tape, and then back off the reproduction head, as would occur during playback.

Clicking on the word ‘Open’ on the plug-in UI displays a second page of parameters. A control labelled HF governs a pre-tape high-frequency boost. Below this is a knob for adjusting the recorder’s bias — a supersonic audio signal added to the audio as it’s being recorded, which reduces distortion and increases headroom. As with the Cal control, there are recommended settings for achieving the most faithful reproduction, but these can be taken with a pinch of salt for creative purposes. Overbiasing, for example, can be useful if you want to achieve more tape compression and saturation than you’d get from an optimally set up machine, while underbiasing yields increased distortion.

There are also two-band EQs for both the sync head and repro head, which affect the sound coming from the tape when either the Sync or Repro buttons are pressed on the UI’s main page. And for added realism, a section headed Noise allows you to introduce varying degrees of hum and hiss. The hum frequency is either 50Hz or 60Hz, depending upon which emphasis EQ setting you use (of which more in a moment). The amount of hiss, meanwhile, is determined not only by the Hiss knob, but also by the tape formula, speed, Cal setting, biasing and levels being used (much as on the real thing!). 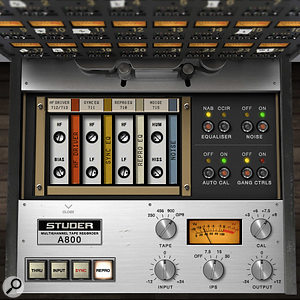 But the A800 plug-in’s authenticity doesn’t end there: you also have a choice of two pre- and de-emphasis filters (EQ curves applied to audio on recording and playback to compensate for tape’s inherent bandwidth limitations — a bit like the RIAA curve used for vinyl). NAB or CCIR filters can be selected, the former of which was widely used in the States, and the latter being commonly associated with the sound of British analogue recordings. With NAB selected, the hum frequency will be 60Hz, and when using CCIR, it is 50Hz (the hum frequency reflects that of AC mains power in either the USA or Europe).

Finally, the A800 features ‘Gang Controls’ setting. When pressed, this button links the controls of all instances of A800 in your DAW, so that all tracks with the A800 inserted are processed identically, as would be the case when recording on a real Studer A800.

Universal Audio advise that, for the most authentic tape sound, the plug-in be instantiated as an insert on individual tracks prior to other processing. Accordingly, DSP usage is fairly modest compared with some of UA’s other recent offerings: 10 mono instances are available on a UAD2 Solo, 20 can be run on a UAD2 Duo, while a UAD2 Quad has enough power for 40 mono instances (UAD1 cards are not supported, unfortunately). The Studer A800 plug-in is selling now for $349, and can be bought directly from Universal Audio’s online shop.

In other UAD news, the not-so-cryptically named 4K plug-in bundle has now been officially endorsed by SSL, the mixer manufacturer upon whose modules the plug-ins were based. In addition to a nice official-looking Solid State Logic badge, the G-Series Bus Compressor (as it is now known) now incorporates an AutoFade button — an automatic, nonlinear fade-out that mimics the sound of a fader being lowered manually. The newly endorsed and renamed E-Series Channel Strip, meanwhile, has also been given a moderate tweaking. The default EQ characteristics have been refined to better reflect those of the hardware, and a new “Brown EQ” mode is available, which emulates the slightly different response of an earlier SSL E-Series channel strip revision. 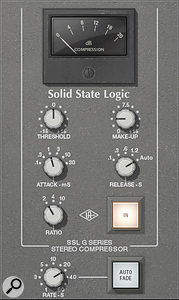 The SSL E-Series Channel Strip plug-in for UAD2 is priced at $299, while the G-Series Bus Compressor is selling for $249. Existing owners of the earlier 4K plug-in bundle can upgrade to the SSL-endorsed versions for $50, though it should be noted that, while the 4K plug-ins can run on UAD1 cards, the updated SSL versions can not. Happily, however, Universal Audio will continue to make the 4K plug-in bundle installer available, so 4K owners who don’t wish to stump up the extra cash, or who don’t have a UAD2 card, aren’t required to do so. 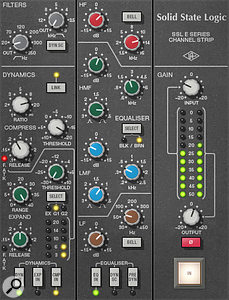 The announcement of Universal Audio’s partnerships with Studer and SSL came at the same time as v5.8 of the UAD software was released. This incorporates UAD performance enhancements for Windows users, as well as 64-bit support for Apple’s OS X. For more information on the new plug-ins, and to download the latest version of UAD software, check out the Universal Audio web site.