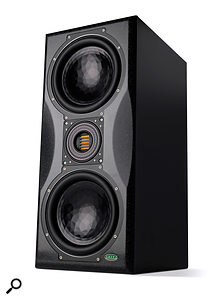 Unity Audio are now shipping their latest active three-way monitor, the Boulder MkIII. Unity have made a name for themselves with their geologically themed speakers in recent years, gaining a stack of professional users and some very favourable reviews in SOS to boot.

The original Boulder’s three-way design was highly praised by Technical Editor Hugh Robjohns in his August 2012 review, saying “Bad mixes are revealed very plainly for what they are but, equally, it is easy to hear when you're getting it right too. That is what justifies the 'monitor' tag that many speakers claim, but few deserve.”

Its clever coaxial design for mid-range and high-frequency reproduction was also a notable feature.

The new Boulder MK-III three-way active monitor follows the same format but is designed to be faster for a more accurate and detailed sound, with an extended bass response and a higher SPL than even its Boulder MKII predecessor.

One of the most eye-catching features of this redesign is undoubtedly the precision-built German Crystal Membrane cone design. The dual 8.5-inch cones feature so-called ‘Aluminium Sandwich’ technology which sees an inverse aluminium-dome glued to a paper cone. The foil stamping stiffens the aluminium dome and, according to Unity Audio, this diminishes resonances and minimises colouration, while improving power handling and dynamics.

The extended system's bass response, down to 30Hz (+/-3dB), and greater headroom and SPL capability is courtesy of a new voice coil design in the revised bass drivers which extend their innate frequency response downwards by almost a full octave compared to the previous units.

These high-grade studio monitors are available now for £6495 including VAT$7990 excluding sales tax.