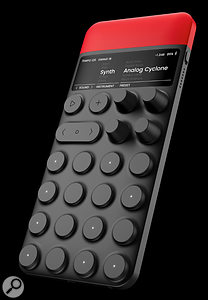 Zont is an as-yet unreleased pocket-sized digital synth that is part Teenage Engineering Pocket Operator and part Nintendo Gameboy. Although it’s not slated for release until autumn 2017, the design is rather pleasing and makes use of four interchangeable sound cartridges (a la Gameboy), AMOLED display, a built-in sequencer for rhythm and melody composition and an iOS/Android control app.

The four colourful sound modules are called Lead, Bass, Rhythm and Noise, however there are no sound clips available yet.

Interestingly Zont Sound, the makers of Zont, appear to be working with producers and DJs, such as Jamie XX, to create limited edition modules.

The smartphone-sized device will also connect via USB-C connection to the Studio Dock which expands the I/O to include RCA and MIDI. 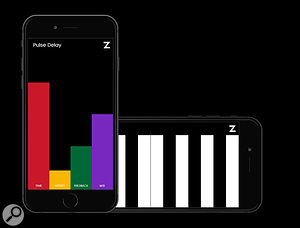 Details are limited but it looks as though the smartphone control app offers keyboard input and effects parameter control.The Zont by itself sports stereo speakers, Bluetooth connectivity, Wi-Fi cloud sync, a rechargeable battery, 3.5mm headphone jack, USB-C and an iOS/Android control app that can be used for keyboard-stye playing or effect control.

No information is available at this point about pricing, but keep an eye out for more developments.