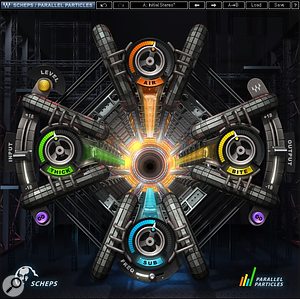 The collaborative partnership of Grammy-winning producer/engineer Andrew Scheps and Waves today bears more fruit. Following Scheps 73, a plug-in recreation of the Neve 1073 module, comes Scheps Parallel Particles, a tone-shaping plug-in which helps you "find the sound you want, without having to figure out which of the traditional tools will get you there” says Scheps.

The plug-in has four main engines each based on one of Andrew’s go-to mixing process. These use parallel processing techniques — something that Scheps has long been an advocate of. Two of the four engines use harmonic synthesis as well, but it's thanks to blending the original signal with the processed signal that a natural sound can be retained.

The four chains are:

Sub, a harmonic generator that creates lows and adds sub frequencies that were never there before. This uses resonance rather than EQ meaning that presence can be created in the low end without things getting out of control.

Air focuses on high frequency content bringing it to the forefront. This isn’t an EQ as such, but rather a harmonic generator (or exciter) that ought not to have the problems of emphasising unwanted sounds and artifacts.

Finally, there’s Thick which adds body to the signal, bolstering lower mids and midrange, creating a feeling similar to that of a microphone being a little bit closer, or the room ambience being darker.

All these processes should give a decent amount of control over most sound sources and all without ever having to think about the finer details of EQ sweeping and compressor settings, so will likely appeal to musicians. If you’re an engineer who wants to quickly alter the feel of a source track, it’s probably also worth checking out. Andrew Scheps himself presents an overview of features with sound examples during a mix below, so see for yourself.

It’s available now and has a special introductory price of $59 ($129 regular).