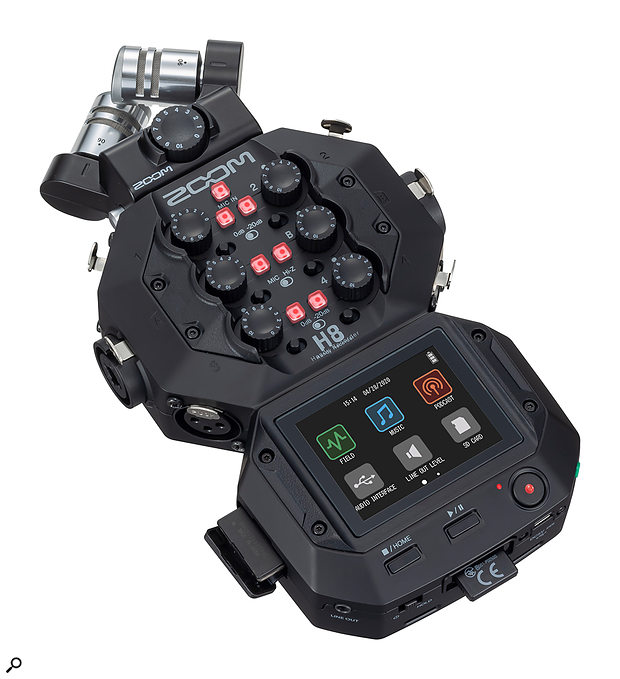 Zoom’s H-series of portable recorders has long been a favourite for musicians and engineers wanting to capture audio while out and about. Indeed, their H4n has won a number of SOS Awards, thanks to its ability to capture not just the sound from its own stereo mics, but the signals from its two fully-featured mic preamps. This arrangement elevated the handheld recorder format from simple dictaphone status to being able to record full band performances, with surprising flexibility come mixdown.

Now, Zoom have released the H8, their most ambitious handheld recorder to date. It comes with a stereo X-Y pair of microphones but, like the H4n’s successor, the H6, these can be swapped out for a range of newly developed mic and input modules. Options include a four-capsule Ambisonic array (which the H8 can decode into a variety of stereo and multi-channel formats), and the Expander Capsule, which provides four additional mic inputs. Zoom tell us that the H8 is fully backwards compatible with the H6’s expansion modules, however, so if you’ve got those you can use them with the H8.

The bulk of the H8’s recording sources connect to the octagonal centre section, and comprise two ‘combi’ inputs for mic/line/instrument signals, plus four straightforward XLR mic inputs. All told then, and with the Expander Capsule fitted, you could capture a generous 10 microphone signals simultaneously — which is quite a feat for a handheld recorder!

The lower section is dominated by a large colour touchscreen, while the bottom edges house the SD-card slot, a USB port, and headphone and line output mini-jacks. That touchscreen allows access to all of the H8’s recording controls and software features, and Zoom have developed three different ‘apps’ for it, each with a different use in mind. The Podcast app lets you load up to 13 sounds into the H8, and trigger them using a touchscreen soundboard, while the Music app focuses on recording and monitoring, allows you to perform overdubs, and even features a full mixer, with control over compression, EQ and effects. The Field app, meanwhile, is aimed at sound designers and location recordists, and features high-resolution metering to help you ensure your recordings never clip.

Other features include remote control via an iOS app, a suite of guitar amp and effects modelling processors, and the ability to work as a multi-channel computer audio interface over USB.

The Zoom H8 will be available from August, and carries a very reasonable price tag of £506.99 including VAT. To learn more about it, watch Zoom’s introductory video below.