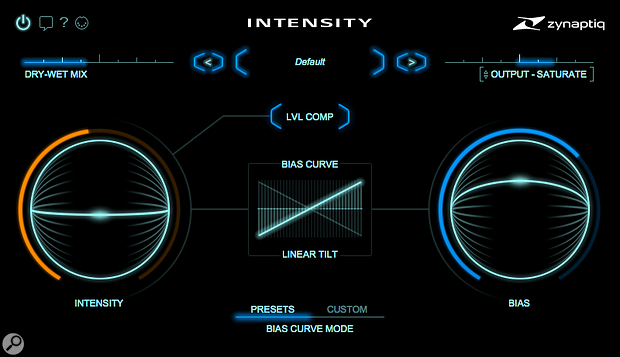 From merging two different sounds using the Morph plug-in to removing reverb, filtering or even drums from an existing recording via Unveil, Unfilter and Unmix:Drums, Zynaptiq have a habit of delivering unconventional, improbable and always interesting plug-ins.

Their latest, dubbed Intensity, is described as a new kind of audio processor for mixing, mastering and sound design. Reportedly based on techniques used in facial recognition algorithms, Intensity promises to enhance the clarity, detail, perceived loudness and density of any audio signal, making sounds “sound more like themselves”.

Intensity’s proprietary algorithm is said to latch onto the most important features of the input signal, which can then be enhanced using the Intensity control. Zynaptiq’s Denis Goekdag describes it as “the closest thing to an ‘Awesome’ knob we’ve come up with so far”!

There are additional parameters – including dry/wet mix, an optional frequency-dependent bias control and a soft-knee saturating limiter at the output stage – but Zynaptiq have prioritised an intuitive, fast workflow over complexity, wrapping a streamlined set of controls around their sophisticated and somewhat mysterious algorithm.

And while they are keen to stress that Intensity is not a compressor, Zynaptiq say that the plug-in is applicable in many of the same situations, serving to lift detail and maximise loudness. Intensity is available now and carries a regular price tag of £329$379, although this has been reduced to only  £129$149 during the intro period (up to 30th June).