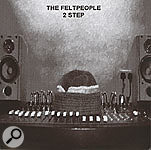 This demo features two mixes of the same track: the original up-tempo, drum & bass-flavoured dance version followed by a dub version. The first mix shows confidence in the arrangement, especially in the handling of the (mostly) four-bar drum loops. These are well chosen, complementing the changes in dynamics throughout the track. The initial loop is a little high in the mix for my taste, even for such a rhythm-heavy style of music, but that's possibly because the snare drum is a fair bit louder than the kick drum on the loop itself. This could be altered with EQ either by cutting a little at the snare's frequency (around 800Hz-1kHz) or boosting the bass frequencies by a few dB to bring the kick further forward. Although many engineers favour subtractive EQ, in this case I'd boost the bass, rather than compromise the energy and tone of the snare. Compressing the whole loop was clearly not an option given the gear at composer Steven Fenton's disposal, but as the snare already sounds very compressed, I don't think this approach would have worked particularly well anyway.

Both mixes include some fine use of delay effects. The stereo echo on the sampled vocal at the start of the first mix makes use of a triplet delay on the right of stereo and a quarter-note delay on the left. As the track proceeds, the delay on the left changes to triplet timing too, before going slightly out of time with the delay on the right. Whether this was intentional or just a lucky mistake, I liked it. Similar delays are then brought into play on other instruments, with a particularly impressive one being triggered from a stabbed keyboard chord. This is absolutely dry in the centre of stereo while both delay returns are panned hard left and right respectively. Later, very long delay repeats are left to die away into a second, modulated delay on the sax, forming a neat segue into the second mix.

The electric funk guitar introduced in the dub mix is the one instrument that doesn't get handled very well. The return level of the heavy ADT (automatic double tracking) or possibly pre-delayed pitch-shift effect is too high and the guitar consequently loses impact and seems out of time with the backing. When used, funk guitar is better left fairly dry and up-front in the mix. Finally, Steven wishes for a fatter sounding mix. It's probably worth running the full mix through the mixing desk's EQ if no post-production plug-ins are available for Sound Forge. Try scooping the mids a little at 400-500Hz, which will warm the bass up without losing energy in the upper mid area of the mix.

The Nixx method of recording vocals reminded me of a conversation I recently had with SOS Editor In Chief Paul White about using dynamic effects and EQ. He was of the opinion that it's better to record with no compression or EQ, adding them afterwards if necessary. Personally, I think that if a vocal sounds good with compression and EQ and is right for the track, go for it. However, Paul makes a good point, because, once you've recorded using compression and EQ, you can't take it off afterwards, and if you overdo either, especially if you over-compress, the mistake is hard to rectify. Recording without dynamic effects and EQ keeps your options open for the mix, and also for any remix engineers who want to add their own character to a mix.

One problem with recording a completely clean vocal is that changes in vocal level during the performance could make it hard for the vocalist to hear his or her own voice or could send the input into overload. The vocalist may also prefer to hear how their voice will eventually sound against the rest of the track while performing takes. Of course, with a low-latency computer-based recording system, you can monitor the signal via compression and EQ whilst only recording the dry signal. If, like me, you have too much latency in your system for that, you can always split the microphone input signal via a patchbay or mixer effects send and apply effects and EQ to the channel you are monitoring but not the one you are recording. 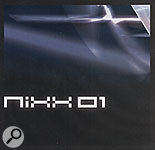 The vocal sound on this demo is impressive and the recording method used to achieve it is worth mentioning. A Shure SM58 was the microphone of choice (or budget!), plugged into a Yamaha 01V mixer where it was compressed and gated before being recorded on the PC. Gating when recording vocals is something I wouldn't normally recommend, because you can't undo any mistakes later. Instead, the usual method would be to gate during the mix, if necessary, to remove any unwanted noise in the gaps between the sung lines. Even so, engineer Paul Everitt has obviously been very careful when setting up the gate threshold, ratio and time parameters and the sound is excellent. The heavy compression suggests that the voice may have been treated once again using a plug-in at the mixing stage, and the combination of microphone model and dynamic effect enable the voice to sit well against a very full backing. An occasional breath suddenly cut shows that some editing has taken place, and, if I was being a perfectionist, I'd have gone into the fine edit page and cut the breath out altogether, or pasted one in from elsewhere.

The vocal performance from female vocalist Nicky McMahon (the other half of the duo) is very good, but I would have been tempted to add backing vocals or harmony lines here and there on the first song. The same melodic line is used a lot and, although there are some differences in phrasing, it eventually needs a lift, and another voice is the most obvious thing to add. Instrumentally, there's a lot going on in the mid-frequency range, with sampled overdriven guitar, strings and synth chords fighting each other for space. I would suggest panning the counter melody played by the strings harder to the opposite side of the stereo field from the guitar when they appear together in the arrangement. Another suggestion would be to use EQ — a bit of mid-frequency cut in the guitar sample would help make it sit in the mix. Otherwise these are a pretty good pair of tracks, though there's a slight tendency to overdo the level of the drums and use too many cymbal crashes on the second song. I also thought the songs had a lot of potential, especially the first which is reminiscent of a recent Kylie single in places. 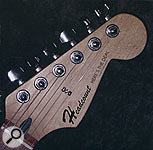 The rock-orientated production of the first track is marred by some muddy sounds. I believe an attempt has been made to create a 'big' guitar sound by multitracking the guitars, but it's emerged with a considerable lack of clarity. This is probably because the guitars' timing is not tight enough, and because the sound lacks some definition in the first place. It's also blurred by the keyboard sound operating in exactly the same frequency area as the guitars. The general concept of a thick chordal wall with a trebly guitar picking over the top of it is fine, but could have been realised more effectively. A double-tracked, overdriven guitar panned hard left and right and a clean guitar panned slightly to the right, with a reverb for that guitar panned more heavily to the left, would spread the sound nicely. Listening to the other tracks which the band specified in their letter I would suggest they concentrate more on the drum programming, especially the art of keeping things simple and well balanced. Remember: it's the kick, snare and hi-hat sounds which need to be the most audible in the mix. 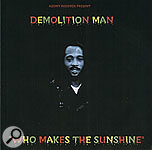 Influenced by artists like Dr Dre and King Jammy, this demo has been very well recorded and mixed by Stevie General. I was especially impressed with the loops and sounds he was able to coax out of Propellerhead Reason for chords in the second track. One is a funky synthesized clavinet with a low-ish bandwidth, around which other slow-attack or backwards chords punctuate rhythmically to set up a fine groove over a modulated sub-bass. The vocal and chords are also rhythmically chopped at different points in the mix using the chords to trigger some kind of gate on the vocal, and this effect works very well, principally because it's not over-used. I was also impressed with the different approaches taken to the two mixes of the opening track, 'Who Makes The Sunshine', ranging from fairly commercial dance to dub reggae. Both are well recorded and the instrumentation is necessarily minimal, but very well balanced nonetheless.

It's immediately noticeable that Paul's CD has been mastered at a low level, being about 6dB lower than most of the demos we receive. While this isn't causing any noise problems, it does mean that his CD will lack impact when competing with others for an A&R man's attention. I'd suggest getting it mastered properly in a local studio before sending it out. As for the music itself, I enjoyed the track 'Flotation' best, especially the location recordings of seagulls, footsteps, dogs barking and other samples. It's an idea handled better on track two, where a storm begins the piece and runs nicely into the guitar figure. However, on the first track the opening sequence is too low in level compared with the music which follows it, but this could be taken care of in a post-production studio if Paul wants to avoid a remix. 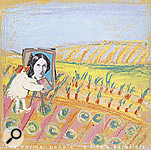 This CD takes an experimental and arty approach to both the choice of sounds and mixing. For a start, all the guitar parts were played using the rather obscure Robert Fripp 'New Standard Tuning', and, although the clean guitar sounds are fine, the overdriven ones are a bit harsh, perhaps intentionally. This all adds to a lack of warmth in the mixes, with the bass guitar being the chief culprit — it sounds like all the low frequencies below 80Hz have been rolled off. In contrast, the vocal sounds are excellent, with an array of effects being used from phase to what sounds like auto-wah, and the overdriven electric violin solos provide the kind of sonic assault that any fans of Fripp will enjoy. This is a demo which conceptually has all the right ideas but is hampered by some loose musicianship and bass-light mixing. The artwork is also well conceived, my favourite drawing being the one on the cover of a chicken painting the portrait of the pre-Raphaelite poetess Christina Rosetti — far from normal!

This is a very fine demo overall but it begins with a poor song — personally, I would have chosen to start the song with the final chorus section, which is pretty full-on and would have maximum impact on the listener, before dropping into verse one. The second track on the CD is a big improvement, with some nice programming of sounds and grooves. The vocals have a touch of Bjork about them, but also have a rather small sound in comparison to the backing. Running them through a tube compressor and a touch of EQ would improve things, but it's also possible that a better microphone would too. With the exception of the first track, the songs on this CD are consistently rather excellent. Unfortunately, Monoplane don't seem to have a web site, so you can't check out their eclectic mix of drum & bass, electro, jazz and hip-hop.