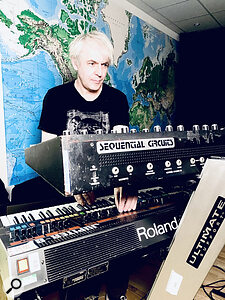 Nick Rhodes still makes extensive use of his vintage analogue synths.Despite Duran Duran’s emphasis on new technology, Nick Rhodes’ own musical contributions drew mainly on his collection of analogue synthesizers. “I barely use much that’s digital aside from the samples, particularly the orchestral samples. I do use some samples from Arturia, which I think are the best samples of analogue synthesizers out there. They’ve really worked hard to get the things as accurate as possible. They’re never going to be the same as analogue, though, because analogue sounds behave differently and synthesizers behave differently too, and they’ll be the first people to say that too. But if you want a sort of a low Moog bass or a Fairlight, which also sounds very close because that was digital anyway and only 8‑bit at the beginning, they’re it.

“I’ve used the same synths for many years, and I find myself constantly returning to my Roland synths: particularly the Jupiter 8, and sometimes the Jupiter 4. I have been also using the Roland Fantom; though it’s digital, I’m astounded by the quality of the reverb in it. It’s almost up there with the standard of a Lexicon. It’s extraordinary as I’ve never had a synth that has had that. I also use a Moog Voyager. I think there is no better bottom end sound than a Moog. I also used an Elka Synthex, a Prophet V and a lot of older analogue beasts.”

Cutting‑edge technology is apparent in the video for the album’s lead single, ‘Invisible’, the first to make use of an artificial intelligence called Huxley.

Nick Rhodes: It was a very fascinating experience working with another type of being, because it was much more than a computer. 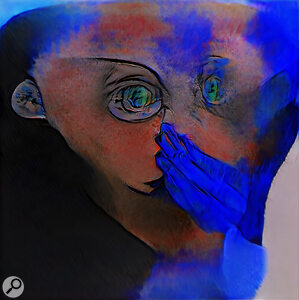 A still from the AI‑created video for ‘Invisible’.“Huxley, our AI, is the most extraordinary machine,” exclaims Rhodes. “I think people are sometimes a little frightened of AI and what it’s going to do, and understandably so. As many of the great thinkers of the world have said, we must never let AIs become weaponised, because the leap in technology over the last decade has been phenomenal. With Huxley, what was interesting in making the video for ‘Invisible’ is that we fed in the song, photos of us, videos of us and, very specifically, videos of us mouthing the words to the song. Also, lyrics and references of what the song was about, along with some art references too, they all went in as well. After a while it learns like it is a child. Then the AI mapped all the measurements of our faces and took a load of photos and images and made its version of what it wanted it to look like. The blacked‑out faces was a shock! We didn’t tell it to black out our eyes, that’s just how it came back. I guess putting multiple layers of different images must have darkened the eyes.

“There were some strange things that happened along the way. At one point it became completely obsessed with dogs, and we didn’t know why. For about three days all it was doing was making dogs and we thought ‘This is going to go wrong!’ as there was no way to control it. So they then had to invent a director, who we called Hitchcock, to go in and give it a rule and try to persuade it by asking, ‘Can you make different types of animals?’ Then it started making all these different types of animals and strange creatures. It was a very fascinating experience working with another type of being, because it was much more than a computer. It was programmed to follow the same processes as the human brain. It’s based on the part of the brain that creates and dreams, rather than just the cognitive part that is logic and fact. The people that worked on it are all students of a prominent neuroscientist, Karl Friston.”

Through their 40‑year career, Duran Duran have successfully adapted to many such changes and developments in music technology. Looking back, Nick Rhodes pinpoints several that he believes were turning points. “There’s been a few of them that were game‑changers, such as sampling, for one. If you listen to an album like Fear Of A Black Planet by Public Enemy, you can hear what they were doing then with samples, making something really remarkable with them. And this was before anyone knew you had to credit people and that you weren’t supposed to just to take people’s things, which I’m sure they did very innocently.

I’ve used the same synths for many years, and I find myself constantly returning to my Roland synths: particularly the Jupiter 8, and sometimes the Jupiter 4... I also use a Moog Voyager. I think there is no better bottom end sound than a Moog.

“The Fairlight CMI, an Australian invention, was very significant in the beginning of proper sampling and digital synthesis. There weren’t many of us that had one at the time. I remember it was a very elite club as it was very expensive, but we had one along with Kate Bush, Peter Gabriel, Trevor Horn, Art Of Noise. The Akai samplers were another. Those Akai samplers made a real big difference. And the Linn Drum along with the Roland TR808 really revolutionised the sound of music through the early ’80s. We used drum machines from the very first album.

“I miss analogue tape, because I like the compression and I like lots of things about it. But there’s a convenience to being able to do things with a computer now and the use of digital effects and how you can mix and keep everything. I remember the very first automation for mixing desks. When we did our first album, Duran Duran [1981] there was me, producer Colin Thurston, the tape operator and whoever else was in the room, and there were like eight hands on the desk. My job might have been to turn on the echo at a certain point on the vocal, and I had to catch it in real time while somebody else had to ride up the string sound at the end of the song and somebody else had to mute the drums at a certain point. There was no automation. It was actually really exciting doing mixes that way, but it was a real drag when you got them wrong, because with some of them you had to do them 20 times to get them right.

“We take it for granted now with Pro Tools, and I also think people take it for granted when they cut things up, because it’s so easy to just sing a chorus and then say, ‘Right, now we’ve got it.’ We’ve tried very hard to never do that, as we try very hard to actually make it more of an experience and a performance. Simon, in particular, is not a fan at all of that cutting and pasting. He always likes to do all his vocals and the backing vocals for each chorus, and you will very rarely hear him say, ‘OK, you can take that and put it in the other place.’

“But where would dance music be without cut and paste? When we used to make 12‑inch versions of our very early songs, the night versions as they were called at the time, with songs like ‘Planet Earth’ and ‘Girls On Film’, we used to play them from start to finish. We would arrange the song and then go, ‘OK, we need another 24 bars there, so you do this with the drums and I’ll play this,’ and we’d literally rehearse an arrangement and then play it for nine minutes or so to a click to keep everything tight. There wasn’t a way to cut things up. Editing with tape was such a laborious process it just didn’t make sense to make 12‑inches like that. The first 12‑inch that we made by cutting tape was ‘Is There Something I Should Know’, which I did with producer Alex Sadkin.”

Rhodes believes the key question about any new technology is whether it will enhance the music or whether it’s just a gimmick. The group were faced with this decision when it came to mixing the new album, which is being issued both in stereo and in Sony’s new Reality Audio 360 immersive format. “I played around with it in the studio with Josh [Blair, engineer] and it’s really good for headphones,” states Rhodes. “I would call it more like an enhanced stereo for around the head, as it’s not so much literally 360. You can put things in the middle in front of your face and move them over to the back of the head, and you can swirl things around the head and you really do feel it, which you wouldn’t think with just stereo in headphones that you would get that sensation.

“We wanted to do the album in that way because it’s a different way to listen to things. You will hear things in a way you wouldn’t if you just listened to it on regular headphones. Because the mixes are basically made from stems, you can pick something and you can, for example, make the snare drum move across diagonally from behind your head to a corner over in front of your head. We had so much fun doing that.” 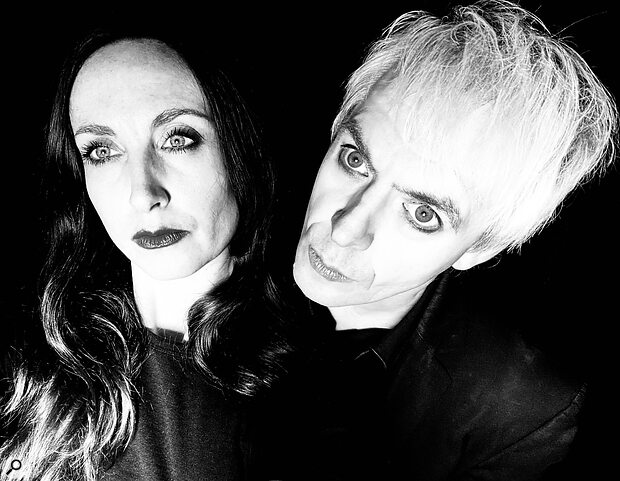 When the pandemic halted proceedings on Future Past, Nick Rhodes embarked on a side project. He teamed up remotely with British artist and singer/violinist Wendy Bevan, he in London and she in Los Angeles, and together they completed a four‑album, all‑instrumental suite.

“When we closed down the Duran Duran project at the start of last year, I went into the studio on my own and started putting together some musical ideas which I sent to Wendy in LA. We decided we’d make a few instrumentals and perhaps put them out so we could introduce her and my work together, and then hopefully get to do an album a few months later. Things began developing as we were sending each other files back and forth. I’d open them up in the morning and find that she had sent me these wonderful soundscapes with violins and ethereal voices, lots of reverb and effects, and it was quite inspirational because it had no real structure to it. It was truly freeform. I’d been used to working in the confines of writing songs where you need a verse and a chorus and certain structure. And this had none of it, and no words either.

In the studio I’ve been using Spitfire Audio and EastWest sounds and the sounds are truly sensational and the samples are really blissful.

“So I rose to the challenge by sending her my pieces, which were a little more structured, as I wanted to see what she would do to them. After we had about eight of them done, they were sounding so beautiful that we decided to carry on. And we roughly based the theme of them on the Universe — which has been plundered a thousand times by every film‑maker, musician and artist — and the turbulence of the past year, and blended that in with some mythology. By the time we had made an album, we could see that there was no end coming to the pandemic, so we just carried on. We decided to make 52 tracks and put 13 tracks on each of four albums that would go out on equinoxes and solstices and have all four released this year, and then we’d make a box set for vinyl.

It was fun for me to have all these sounds and melodies and sound effects to work with and with orchestra too, because we’ve got a lot more orchestral sounds on these recordings. In the studio I’ve been using Spitfire Audio and EastWest sounds and the sounds are truly sensational and the samples are really blissful.”