From Eno Apprentice To Brit Award-winning Producer By Tom Doyle 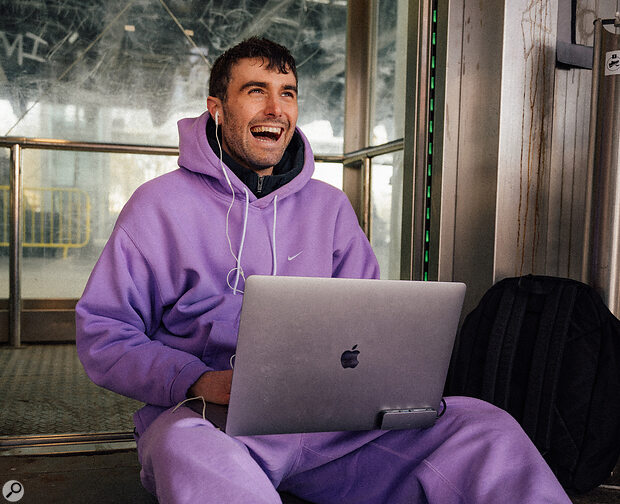 Producer Fred Gibson (aka Fred again..) studied under Brian Eno and has worked with some of the biggest artists in the world. And his favourite microphone is the one built into his iPhone.

A dozen years into a music career that has thus far involved an apprenticeship with Brian Eno, writing and production credits for Ed Sheeran, Roots Manuva and Stormzy, a Brit Award for Producer Of The Year in 2020, plus his own solo career under the name of Fred again.., Fred Gibson is someone who very much likes to go his own way. As often working out and about and on the move on his MacBook as rooted in either of his studios — a home setup in Waterloo, central London, or his room at Promised Land Studios in Maida Vale, West London — Gibson’s emphasis is very much on productivity over location.

“I’m like an anti‑studio guy,” he laughs. “I personally don’t love studios. For what I do, I feel so empowered by the fact that I can do it wherever I want in the world with just my laptop, and my phone. I like the freedom of just being able to go anywhere and load up any song and make music really freely.”

Gibson discovered Logic as a young teenager and hasn’t been tempted away from it by any other DAW. “I tried, when I was about 18, to retrain myself in Ableton,” he says. “Because I was watching people use it and there were so many things they could do so easily that were trickier in Logic. But I realised that I was fighting what had become my primary language. And it just wasn’t a constructive use of my time.

“Logic over the last few years has added to its toolkit most of the stuff that I was wanting that Ableton had,” he adds. “But, really, I think software is just a vehicle. You want it to get out of the way, so you can do your ideas. I’ve found no link between great music and software.”

...software is just a vehicle. You want it to get out of the way, so you can do your ideas. I’ve found no link between great music and software.

Logic is also Brian Eno’s preferred DAW and so it was the key to Fred Gibson, only 16 at the time, being taken on by the former Roxy Music man, ambient music pioneer, and U2 and Coldplay producer to work alongside him as his assistant in his West London studio. As a kid, Gibson had studied classical piano, but it was his interest in recording that fired his young imagination. Initially, he began experimenting at home using a Boss BR1600CD 16‑track digital recorder, before his music teacher at the time introduced him to Logic.

Nonetheless, even though he immersed himself in Logic every day for a couple of years, it took a friend to point out that Gibson hadn’t yet even started using the program’s software instruments. “I just thought it was an audio recorder, like the Boss thing,” he grins. “I’d never really heard of MIDI. So, yeah, Logic repeatedly blew my mind and it’s been a love affair that’s lasted.”

Inspired, Gibson created what he calls an “electronic symphony” — 90 minutes long and involving rappers, singers and a 50‑piece school orchestra — which was passed on to Eno via a mutual friend. It bagged Gibson the assistant job. “I was 16 and I was the classical guy who was doing hip‑hop. So that was kind of my USP as well as being the guy who could do things in Logic quite quickly.

“Brian would be the first to say he’s not classically trained. That isn’t how his brain works... to his advantage. But when I first got there, I remember being kind of confused. Brian would play this thing and be like, ‘Oh my God, listen to that... What’s that?’ I’d be like, ‘Oh, it’s just a C major chord.’ He’d say, ‘Yeah, but listen to it.’ It’s that childlike naivety that everyone is so desperate to keep, but that musical theory can sometimes threaten to tarnish.

“So, it was a beautiful, long learning curve to sort of really try and understand the extent to which the theory can be a tool, but nothing more than that. The real goal is to listen with the innocence of any person who’s not thinking about anything other than how that thing sounds. And that’s a thing that I think every musician is endeavouring to keep.”

Gibson experienced Eno’s unorthodox approaches and methods when working on two albums the seasoned producer made in collaboration with Karl Hyde of Underworld in 2014: Someday World and High Life.

“I remember Brian holding this massage ball and creeping up behind Karl as he was doing a guitar take. I was holding the mic next to Karl’s guitar. And Brian comes up behind him and starts smashing the guitar with this thing. I’m just holding the mic, like, ‘Everybody stay calm.’ There were lots of funny moments like that.”

By 2015, Fred Gibson was fast progressing as a producer in his own right. His first major credit came with Roots Manuva’s ninth album, Bleeds, after he met the manager of the London rapper (real name Rodney Smith). “I was like, ‘Please let me have a go. Send me one a cappella. Let me just try like one thing.’ He sent me an a cappella of the song ‘Cargo’ and I made 10 versions of the song from that. The same thing with the song ‘Hard Bastards’.

“Then they put me in a session with Rodney. Literally within an hour of our first session we wrote ‘Fighting For?’. That was just like a jam on the piano with him. The best way I find working with rappers is to try and thrive off of the jam spirit, because most of them have come up from some school of freestyle. They’re quite comfortable being put on the spot. So, there’s no, like, investment, no egos getting hurt. You just jam.

“‘Fighting For?’ was jamming piano and him chatting around on the mic. And then at like, 35 minutes, a riff comes, and he starts singing that. And then it’s a very pure creation moment. As opposed to sitting there, pausing, playing, pausing, playing the tune, and having to be like, ‘Oh, no, that’s not a good idea.’ You don’t have to say anything. You just speak through music. So, it’s a much more pure type of creation, I find.”

When working on hip‑hop beats, Gibson tends to exclusively use NI’s Battery plug‑in and his own sample library...

When working on hip‑hop beats, Gibson tends to exclusively use NI’s Battery plug‑in and his own sample library, which he’s constantly updating. “Every two months or so I’ll just make a new set of custom kits and instruments for myself,” he says. “On a lazy Sunday where you don’t feel inspired, you don’t really have to have much in the tank to do that. And it fuels you behind the scenes. When you are then really motivated, you got these 10 kits that have all the sounds.

“I like Battery as the host, because it’s the quickest way you can easily pitch them and add compression, and there’s a good master compression bus for them all. It’s got all the stuff I like in terms of being able to pitch a sound down like 20 semitones really quickly and mash it through tape saturation. And the ADSR is also really important. Because 90 percent of drum manipulation,...