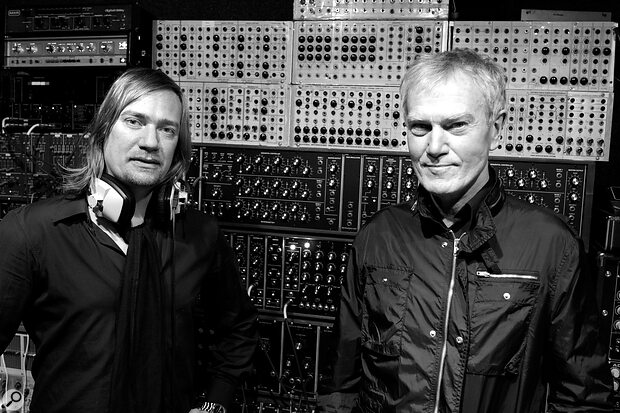 John’s most recent albums have been credited to John Foxx and the Maths, a duo comprising John and synth wizard Benge (left).

In a new three‑part series, DJ, producer and remixer Dave Clarke meets key figures from half a century of electronic music.

In this series, I will be interviewing leading figures from three generations of electronic music: people who have shaped, are shaping, and will shape the future of these genres. My aim was not just to find out about their studio and music‑making techniques, but to dig a little deeper and work out what makes them tick creatively. For this first instalment, I elected to interview John Foxx.

Many will know John as part of Ultravox, but on leaving that band, he embarked on a very long solo career that is still going some 40 years and 40 albums later. A leading figure in electronic music since the late ’70s, John’s influence on the early UK techno scene is hard to overstate — simply put, John was a catalyst for many of us to begin making music. I found his 1979 album Metamatic both disturbing and sublime. His monochromatic soundscape was Radiophonic Workshop but with politics and rhythm; his lyrics were mysterious yet made sense. For me, he is perhaps the most sensitive yet perceptive soul in electronica and always a joy to interview (and remix for!).

A leading figure in electronic music since the late ’70s, John’s influence on the early UK techno scene is hard to overstate — simply put, John was a catalyst for many of us to begin making music.

When you started being involved in this industry, electronic music was just beginning to take a foothold. Do you ever look back and wonder how things would have been if you had a career with only a guitar and microphone?

Well, I started out as a singer‑songwriter playing a 12‑string guitar, with an eye on Lou Reed and the Velvets. This was about 1970. I supported bands around Manchester — actually, they supported me! — and grew accustomed to being completely ignored, but a fortunate weekly residency with Stackwaddy in Salford led to that room above a pub becoming crowded. It was a very useful scene: big room, easy‑going, a new generation coming in. I could write new songs every week and they’d get listened to or ignored — a good testing ground.

Then, in 1973, I went off to art school in London. A year later, phase two began, auditioning the band that became Ultravox. I’d begun tinkering with a Minimoog at art school, and that had given me some ideas. It was also a follow‑up to a much earlier brush with electronics. In 1964 my friend Tony Bassett converted a transistor radio into a Theremin. You changed pitch and volume by proximity to the aerial. I was impressed, because it could really howl. I found this tremendously exciting. It was like science-fiction.

Were Minimoogs and Theremins the kind of instruments you were waiting for but didn’t realise that you needed them until they arrived?

Yes! I also think there was a lot of foreshadowing coming from science‑fiction writing and film soundtracks such as Forbidden Planet, then Delia Derbyshire and Daphne Oram’s work in the Beeb’s Radiophonic Workshop. Most especially, Samuel R Delany’s book Nova, which I first picked up as a very weathered tourist leftover in La Escala, Spain, when hitchhiking in 1968. [John would often be looking for the art that he later studied at art school by travelling around in Europe.] It contained a glimpse of some technological possibilities for music.

At that time, sci‑fi was the great predictor, and Delany envisaged a punky beatnik character called Mouse, who played a Syrynx: a new instrument, akin to a synth/sitar which also acted on the audience as an hallucinogenic virtual broadcast. This was a prophetic vision. We humans really do want to surrender to something akin to dreaming, internalised cinema and hallucination. Total immersion, in other words. I truly think we’re still working towards this, and it will become a reality at some point in the future.

So these were some of the ideas that really fired me. By the time I began auditioning musicians for Ultravox, in early 1974, that was the sort of vision I had in mind for the band. A little later, this stuff evolved a name and a genre: Cyberpunk, as William Gibson called it.

Around the same time, across the pond, the Velvets were doing The Exploding Plastic Inevitable, and I now realise Neu! and Conny Plank amongst others were just beginning operations...