Engineering Tales From The '80s By James Gardner

Howard Gray gives us a fascinating look behind the scenes of recording and engineering some of the biggest tracks of the '80s. James Gardner chats to him about his journey, starting out as a tape op through to becoming a highly regarded freelance engineer.

Howard started out in the early '80s as a teenage razor-sharp tape operator at The Manor — Virgin Records’ quintessential getting it together in the country recording facility, before graduating to house engineer at one of the first Solid State Logic console-equipped studios, West London’s legendary Townhouse. Sessions there included Kate Bush, Phil Collins, XTC, OMD, PIL, The Stranglers, Japan, Rip Rig & Panic, Van Morrison and ABC. He worked on countless classic '80s records with producers like Mick Glossop, John Leckie, Hugh Padgham, Steve Lillywhite, Adrian Sherwood and Trevor Horn, engineering albums such as Simple Minds’ Sparkle In The Rain and the paradigm-shifting Cupid & Psyche for Scritti Politti.

Witness to the dawn of digital and early adopter of the Sequential Circuits Studio 440, the possibilities of sampling led Howard in the early '90s to form dance/rock/dub combo Apollo 440, who were prolific producers and remixers of, amongst others, U2, Scritti and Shabba Ranks, Jean-Michel Jarre, James, Hotei, Puretone and Jeff Beck, from their Camden Town ‘Apollo Control’ base. The group delivered three albums for Sony Records, numerous top 40 singles, including international hit 'Stop The Rock', plus film themes for Lost In Space and Charlie’s Angels. He still regularly directs their live performance/dub sound system at European festivals from front-of-house.

Mixer of 'The Anfield Rap', co-writer and producer of 'Pass And Move' (it’s the Liverpool Groove), and now nearing 500 credits on Discogs. Howard's recent projects include Jazz LPs and Baroque Opera. 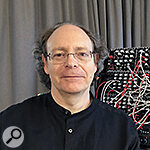 James Gardner is a composer, synthesizer programmer, researcher and broadcaster based in Auckland, New Zealand. Born in Liverpool, James played and programmed synthesizers in London during the 1980s, and in 1990 co-founded the band/remix team Apollo 440. Following encouragement from Michael Finnissy, he left the group in 1993 to concentrate on notated composition. Moving to New Zealand in 1994, James established the contemporary music ensemble 175 East, which he directed until 2010.

As well as composing, he has written and presented many programmes for RNZ Concert including features on Frank Zappa, Morton Feldman, John Barry’s James Bond soundtracks, and These Hopeful Machines — a six-part series on electronic music.

As a teacher, Gardner has lectured on music and music technology at the University of Auckland, Unitec Institute of Technology and the University of Canterbury, Christchurch, where he is an Adjunct Senior Fellow. His primary research topic is the synthesizer company EMS, and the electronic music studio of Peter Zinovieff.