Producing Pop For The 21st Century By Tom Doyle 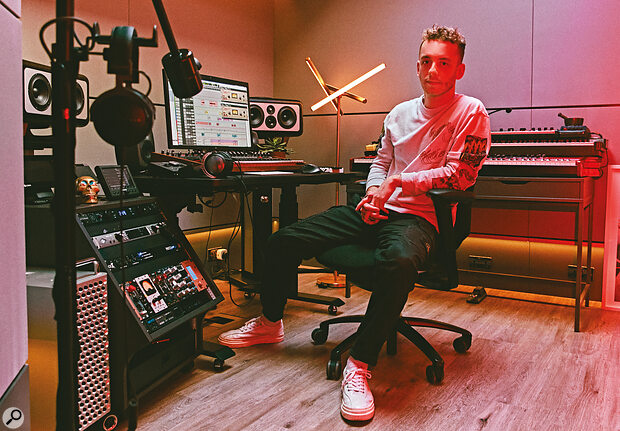 The way pop music is made and consumed has changed radically in the last few years. Pete Rycroft, aka Lostboy, has adapted better than most...

Having produced the likes of Little Mix, the Vamps, Anne‑Marie and Rita Ora, co‑written with Lewis Capaldi and Liam Payne and racked up hundreds of millions of streams worldwide, Lostboy (aka Pete Rycroft) is fast becoming one of the most successful studio names in pop.

Still only 26 and currently operating out of Rollover Studios in West London, Rycroft grew up in Moreton‑in‑Marsh in the Cotswolds where his interest in recording grew out of being a drummer in bands. “I sort of fell into production,” he says. “There wasn’t much around in terms of studios and we wanted to record our stuff. It was about being in bands and trying to make them sound less shit [laughs].

“But slowly in my teens I figured out that there was this whole world of songwriting, which was kind of what I was interested in, just as much as the production. To me, it’s always been a hand‑in‑hand thing. What I do day‑to‑day is writing‑slash‑production. So, I’m kind of just straddling that line of being the guy who has their back to the artist and the person who’s writing the song.”

Music was all around the house as Pete Rycroft was growing up, with his father being both a classical singer and a fan of polished or adventurous ’70s and ’80s rock and pop. These influences left their mark on his future producer son.

“Yeah, my dad was really into his choral stuff and that must have stuck with me subconsciously,” Rycroft says. “For me, the vocal and the melody of any production is always king and I think that’s probably where that comes from.

“He also used to listen to a lot of Genesis and Peter Gabriel and Seal and that really inspired my production palette. A lot of my weird gated reverbs and strange sort of prominent drums really nod to those Peter Gabriel records or whatever.”

After leaving school, Rycroft moved to London and enrolled on a songwriting course at university, before quickly discovering that he’d much rather be busy making music than studying it. “I just started doing writing sessions with all sorts of up‑and‑coming artists in London,” he explains, “and I ended up dropping out of uni after a year. My lawyer introduced me to my manager at that point and it really was a case of slowly meeting new people, hustling, and just building a way up.”

But even before he’d left the Cotswolds for London, Rycroft had already begun making in‑roads into the production world. Having produced some demos that brought him to the attention of Fraser T Smith, he started remote working for Stormzy, Adele and Sam Smith’s producer.

“Basically, doing additional production and little sprinkles on bits and bobs that he was working on,” Rycroft explains. “He was in LA at the time and he would send stuff over and I’d be sat in my little bedroom being just like, ‘Wow, this is a real artist and one I’ve heard of... This is a big opportunity.’ That was definitely how I got my first few credits on major label things like Anne‑Marie.”

By the time Pete Rycroft was living in a shared flat in West Hampstead in North‑West London, he’d rented a second bedroom in the loft to use as his studio. “At the top of the house and three foot by two,” he laughs. “It was just a nightmare because it was so hot. I initially just had a computer and some speakers, one keyboard and a microphone.”

In this environment, Rycroft worked with various major label names, including Gabrielle Aplin. “Artists like Gabrielle who I’d just met would come in and have to walk up all the stairs, past my flatmates’ bedrooms and there’d be one of them sat in his pants eating cereal. I’d be saying, ‘I’m so sorry, this is not what you’re used to, I’m sure.’ I was just panicking because I was like, ‘Oh God, they must be in Abbey Road every other day this week and now they’re here.’”

Initially, his panic extended to the session itself. Through time though, Rycroft decided that communication with an artist is key and began to slow down and get to know them. “When I first started out and was sort of freaking out internally when these people were coming in,” he says, “I would just rush into starting something and hope that they were into it.

“Eventually I realised that when you’re with someone you haven’t met before, the most valuable thing you can get from that session is the personal connection, and obviously that’ll feed into the song. You’ll get a song that means more to them and so it’s likely to make it onto the album or whatever. As opposed to you just panicking and making a rubbish beat,...