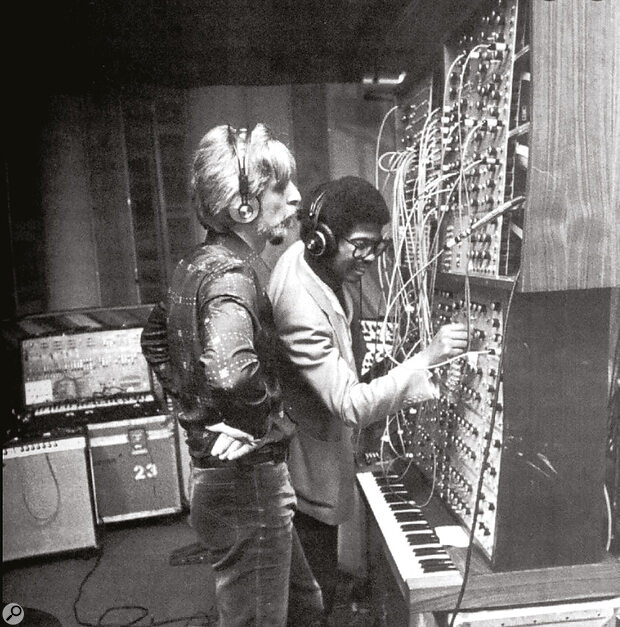 Patrick Gleeson and Herbie Hancock at the E‑mu modular.

Alongside the people who make them, Patrick Gleeson has probably done more than anyone else to introduce synthesizers to popular music.

Around the start of 1972, Herbie Hancock came to see Patrick Gleeson at Different Fur, the studio Patrick was running in San Francisco. Herbie Hancock, already a star pianist with a curiosity beyond the apparent boundaries of jazz, brought with him some multitracks for Crossings, his 10th album, due for release a little later that year.

Patrick’s studio partner, John Vieira, laced up one of Herbie’s tapes, a Bennie Maupin piece called ‘Quasar’. Different Fur’s Moog III modular synthesizer was set up in the studio room, and Patrick stood ready as the tape rolled. About 20 seconds in, Herbie called out that maybe something could work right there.

“I had an idea about something I wanted to hear,” Patrick recalls today, nearly 50 years later. “It would be like a flock of birds rising out of the music,” he says. He patched up the sound as quickly as possible — “I was thinking the guy’s gonna be so impatient watching this procedure and I really have to rush”‑ and conjured the flickering birds as the tape played. A happy Herbie said it sounded great, and then asked if it had been recorded. Patrick said, “Oh, I thought you’re going to play it. I’m just setting it up.” Herbie replied that Patrick seemed to be doing just fine and should go ahead.

“So we worked like that for about 45 minutes,” Patrick remembers, “and then Herbie said, ‘You know what, I have some things I’ve got to do today, why don’t you just keep going, and I’ll come back later?’ He didn’t specify what ‘later’ was. I worked all night, I worked all the next morning, and around 1 o’clock the next afternoon, about 24 hours later, Herbie comes into the studio. I had overdubbed one half of the whole album. Herbie has told people that what he heard just blew him away, that he’d never heard anything like it. And then a little later, he asked me to go on the road with the band.”

It was the start of a relatively brief but important episode that changed Patrick’s musical life, and at the same time steered Herbie the jazz pianist to a synthesized course for many years.

Patrick had first seen a synthesizer around five years earlier, probably early in 1967. He was teaching 18th Century English Literature at San Francisco State University when a couple of dancers from Anna Halprin’s Dancer’s Workshop, aware of his interest in musique concrète, asked if he might make some music for one of their performances.

He had taken piano lessons from the age of six, and by the third grade had fallen in love with jazz, which led him to further adventurous forms. Now, he set to work making tape loops on an array of Wollensak recorders borrowed from the uni’s AV department, and the performance went ahead at the Halprin studios. “And when I was there,” Patrick says, “I noticed this strange machine in a little room, all by itself.”

The strange machine turned out to be a Buchla synthesizer. Donald Buchla was an analogue synth pioneer, famously working with Morton Subotnick, whose ‘Silver Apples Of The Moon’ was an early sign of the potential for electronic music composition. Patrick followed the so‑called Buchla Box from Halprin’s to its new home at the Mills Tape Music Center, aka the San Francisco Tape Music Center, another early hotbed of electronic experimentation.

“They told me there was nobody to teach me and no instruction manual, that I’d have to figure it out myself,” he recalls. “And Don’s machines were eccentric, anyway. I basically bribed the studio manager there to give me one night a week, and I learned it. By 1967 or so — can you believe this? — I was giving Buchla performances to 500 people or more in the Mills College outdoor auditorium.”

The model he used was a 100 modular, and while Don Buchla and Robert Moog were developing similar groundbreaking ideas about analogue synthesis on opposite coasts, their approaches were, naturally, rather different. “Don was very much against conventional keyboards,” Patrick says, “and he didn’t want to have tonal music played on his synthesizer. He was a cranky guy, and Bob Moog was so affable.” Perhaps that’s one of the reasons most people know the name Moog today but fewer know the name Buchla? “Exactly so. Bob was not the most meticulous audio engineer in the world. For example, several of the little machines he built for me had a noticeable hum. But he was a charming guy, so interested in other people, and all his synths had that ineffable something I’ll call ‘soul’. I think you’ll never hear...