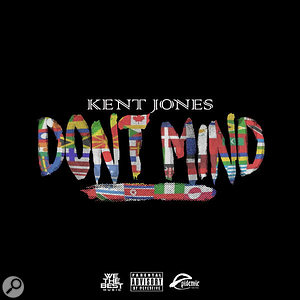 An ear-catchingly bright, rather hissy vocal reverb this — more what I’d expect of an ’80s pop song than a track from an up-and-coming hip-hop artist! In context, though, it does bring with it a suitably ramshackle personality, and also creates a nice stereo interplay with the bright electronic hat and side-stick snare sounds, which appear to be feeding the same effect. In fact, in that respect all the echoing consonants and breaths fulfil something akin to the role of a layered breakbeat in many other electronic productions, adding an organic touch to otherwise metronomically unvarying programmed percussion. A neat application. Mike Senior 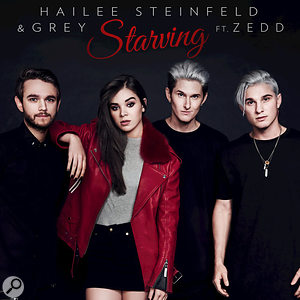 What a stellar opening lead vocal sound! Listen to those low mids, for instance, which manage to be as full and warm-sounding as you’d ever want, but never get overbearing. Many project-studio productions struggle with this, because of singers moving around while singing and causing variations in the proximity-effect bass boost of a cardioid vocal mic. Perhaps Steinfeld’s one of those rare singers who sings while standing still, or she’d been gaffer-taped to the pop shield (how often have we all wished we could do that?), or a mic was chosen that didn’t have much proximity effect (an omni, for example), or the producers simply footled around with dynamic low-mid-range processing/automation to even things out at mixdown... Whatever it was, it worked! And at the top end things are no less beautifully controlled, with plenty of breathiness and intimacy, but alongside consonants and sibilants that have been carefully restrained.

But what really makes this a class act is how Steinfeld’s different vocal deliveries are balanced against each other. To pick just one example, check out the line “the more that I know you the more I want to” at 0:19. The first four words have the breathy chest voice that’s already been well establish in the song’s opening lines, but for “know you” she drives her voice more powerfully, creating much more strident mid-range harmonics and less breathiness, and then “the” switches momentarily into a much breathier head voice, before returning to the opening vocal character. From experience, I know how difficult it can be to balance these kinds of vocal timbre changes so that the musical line sounds even, but here it’s managed effortlessly. Again, maybe it’s just Steinfeld’s singing technique we’re hearing, but if you ask me, there’s been some detailed mixdown processing of individual words and phrases — things like taming resonances on the harder-sung lines, boosting mid-range on the head-voice moments, and detailed fader automation.

Beyond that, there are many other creative production moments to relish. The ‘heartbeat in the backing track’ sound-effect conceit is surely old enough to need a pacemaker by now, but here under the “you make my heart beat faster” line it’s revitalised by being built into a 3/16th-based rhythmic fill with preparatory ‘tape rewinding’ transition. There’s masses of subtle ear-candy too, from the stereo ‘suspicion of raindrops’ behind the acoustic guitar intro, to the ‘oops, dropped my keys!’ one-shot at 0:18, to the ever-shifting constellation of ghost notes, glitches, and mouth percussion that twinkle around the main chorus beat. And wouldn’t you have expected something fizzier-sounding, if I’d whispered in your ear at the end of verse one “...here come the synth stabs”? Yet what we actually get makes perfect sense mix-wise, leaving ample room for all that glittery percussion detail.

And finally, notice that the song features no middle section at all — it’s just verse, chorus, verse, chorus. That it manages to last to three minutes is largely thanks to the commercially savvy technique of repeating the chorus material with such a different arrangement that it feels almost like a whole new musical section. Mike Senior 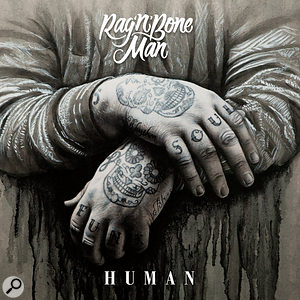 I love the way this production makes a stark contrast between the muscularity of the super-direct, mono, rhythmic bass, and the lugubrious, reverb-drenched arrangement about it, with its slow-moving choir and string lines, staggered multi-layer backbeat, and washed-out cymbal hits. Had the bass not been as dry, the other instruments wouldn’t have appeared as epicly cavernous; and, by the same token, had the arrangement been more upfront, the bass wouldn’t make such a brutal impact. But what makes the confection complete for me is that the lead vocal then acts as a kind bridge between these two opposing sound worlds, delivering a solidly gritty mono image, but with a judicious mechanical reverb tail that stays well behind the singer, rather than dragging him too far backwards. In short, this is a mix that strikes a great balance between creativity and shrewd judgement.

My only complaint is that the emotional authenticity of the vocal performance feels like it’s been compromised by the warbling side-effects of some kind of Auto-Tune style pitch correction, especially on those occasions when it sounds like it’s momentarily mistracking and trying to correct to the wrong pitch, for example on “I’m blind” at 0:22 and “after all” at 0:27. It not that I have anything against pitch correction in its own right, but in this specific case the unnatural vocal quality it produces feels at odds with lyrics like “I’m only human, I make mistakes”. Mike Senior

‘Shout Out To My Ex’ 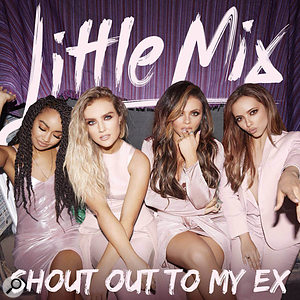 I’ve been a fan of Serban Ghenea’s mixes ever since his work on NERD’s In Search Of 15 years ago, but I’ve always had him down as a bit of a ‘loud and upfront at all costs’ kind of guy. As such, I expected to be able to just ‘set and forget’ a comfortable listening level for this mix, confident that I wouldn’t get any surprises, and was thus startled to find myself reaching for the volume knob the moment the first chorus arrived, because it suddenly felt too loud. In a song with a title hook containing “shout out”, I can’t help thinking this is a good thing, even if only as a moment of sheer impact, but what’s more intriguing is that I don’t reckon Ghenea (or indeed Little Mix’s label Syco) would sanction such long-term dynamics at the expense of overall loudness without solid financial reasons, which suggests that they now consider more dynamic (well, slightly more dynamic) mixes to provide a real commercial advantage. If so, that’s a definite signal of the tide turning in the Loudness War, as I see it. (Or, at least, the current one. Mark my words, though — I reckon we’ll have a new Loudness War soon enough, as producers start adjusting their work in response to the loudness detection algorithms instead. Whether this will impact the nature of music as harmfully, only time will tell.)

Issues of loudness aside, this mix is also noteworthy for its use of widening effects for the verse lead vocals. This is a common pop tactic (and something I’m especially partial to myself!), for a couple of reasons. Firstly, if the singer is made to occupy more of the stereo panorama, it implies psychologically that they must be in the foreground of the image — in other words closer to the listener. And, secondly, by sharing the vocal’s energy more evenly between the Middle and Sides components of the stereo signal (but without compromising its nominally central stereo position), you reduce the vocal balance change relative to panned signals when the mix is heard in mono.

This song’s specific implementation is particularly classy, though. For a start, if you listen to the stereo Sides signal, you’ll hear that there’s a lot going on (primarily some kind of subtle detune or modulation effect, but also a touch of mid-range ambience), but when you switch back to the full mix it still sounds commendably dry and upfront. This speaks to me of very careful tailoring of the effect spectrum, keeping its frequencies well masked behind those of the dry sound. But what’s also exemplary is how the widening folds down when the mix is heard in mono — not a trace of chorus-y modulation artifacts or adverse early-reflection comb-filtering. In fact, on those grounds it wouldn’t at all surprise me if Ghenea had an M-S matrix eliminating the mono component from the widening effects’ return channels. Mike Senior 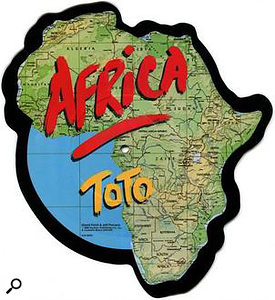 One of the things I like about this song is the way the phrase structure supports the song structure. Whereas a lot of songs fundamentally base themselves around a repeating four-bar phrase-structure, with perhaps the odd extended or curtailed phrase-length for emphasis, Toto in a sense invert this idea here, repeatedly destabilising the four-bar convention with half-bar extensions in the verses, only returning to regular four-bar units for the transition into the chorus and the chorus itself.

On a more long-term level, there’s something similar going on across the three choruses. The first two feature only one four-bar unit, because of the way the tail-end of the second fragments into the modulatory coda section under “had” at 1:36 and 2:33 respectively. The final double-chorus, on the other hand, only features this coda at the very end, giving us the longest uninterrupted run of four-bar stability in the song, stretching all the way from the second half of the synth solo at 3:09 to the final coda at 4:00. One fundamental purpose of a concluding double-chorus in mainstream productions is to emphasise the sense of musical resolution and fulfilment, and in that respect I think what Toto have done here is very effective at enhancing that musical function.

Returning to the verse sections, let me also point out a well-worn technique the band are using here to help make their non-standard section lengths more digestible by the listener. First, they establish a cast-iron connection between the bass/synth riff first heard at 0:10 and the bars/beats grid. By the time we reach the first verse, we’ve heard that riff four times, creating a firm connection between its arrival and the four/four downbeat. As a result, when the riff appears half-way through the fourth bar of the verse, it strongly suggests that the downbeat has shifted by two beats, making the ensuing two-beat section extension seem more logical musically.

In a more technical vein, notice the way the synth filters are gradually opened as a swell into the chorus at 1:15 — something that took a little more planning back in those pre-MIDI days. The synth solo at 2:58 is also mixed surprisingly strong in the balance, and louder than most of the verse lead vocals in fact. While this certainly makes a statement, I think the backing then feels a bit small by comparison, so I wish they’d given it a bit less low mid-range. As it is, it sounds like the keyboard player’s trying to steal the show. Come to think of it, maybe that’s who’s chuckling during the intro at 0:03... Mike Senior