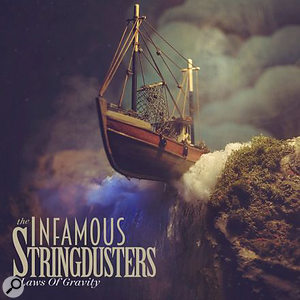 This single from the Infamous Stringdusters’ Grammy-winning album Laws Of Gravity is definitely worth checking out for its meaty upright bass tone, especially when the instrument plunges down to low E for the solo section at 2:05, delivering that wonderfully confident 41Hz fundamental. Besides this, one detail that particularly struck me was the momentary D# dissonance Chris Pandolfi injects into his banjo solo over the prevailing C-major harmony at 2:10. My first instinct was ‘oops!’, but on repeated listening the melodic logic of its rising line now makes more sense, despite that initially disconcerting half-tone clash. It actually reminds me of the classical repertoire, bizarrely enough, because the history of notated music is littered with examples of ‘horizontal’ (ie. melodic) motion justifying odd-sounding ‘vertical’ (ie. harmonic) sonorities. It’s just that I wasn’t quite expecting it in mainstream bluegrass!

One other little thing also niggles me just before the final chorus: the way the vocals fade out on the word “me” (2:43). It’s as if a fader is pulling them down in level, or like they’re suddenly moving away from you, rather than just ending their notes naturally, and I can’t help feeling that’s counterproductive given the naturalistic conceit of the song (and indeed its ‘in the studio’ YouTube video). If they’d wanted to adjust the length of that caesura without re-recording anything, surely it wouldn’t have been rocket science to extend or contract those notes to order, even without using any fancy time-stretching software. I do this kind of thing all the time using simple cross-faded edits, and I’d expect that the smooth homogeneity of the layered vocal tone in this instance would only make it easier to manage. I suppose this decision might have been made at mastering, where the edit wouldn’t have been as easy, in which case the fade-out method (with a reverb-tail concealment) could well have been the most expedient option. Whatever the reason, it’s a shame, because in a small way that moment pulls me out of the track emotionally at one of the moments I’d most want to be fully engaged, and somehow undermines the sense of arrival for that final band entry. Mike Senior 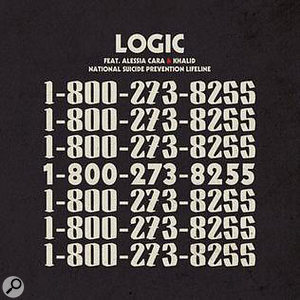 One of the difficulties with using an obvious echo effect on lead vocals is that the intelligibility of any given word can become obscured by the recirculating phonemes of previous words, especially in situations where the lyrics are delivered at some speed. This production showcases one of the classic solutions to this problem: put the delay effect only onto the final words of each phrase, such that the echoes land in the gap before the next phrase begins, rather than conflicting with any other words. You can clearly hear this principle in action during the opening hook section, where the words “time”, “mind”, and “mine” all feature prominent echoes.

If you like the idea, there are a number of ways to implement it in practice within a DAW. The classic automatic solution is to apply a ducker to the delay effect’s return channel, feeding the ducker’s side-chain from the dry vocal signal to create a so-called ‘ducking delay’. These days, though, most people seem to prefer the slightly more controllable approaches of either using automated effects sends, or of inserting the delay effect on a separate track and then copying whichever words you want effected to that track. Mike Senior 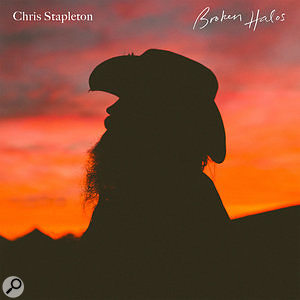 The power of this Grammy-winning production is its simplicity, not only framing Chris Stapleton’s prodigious vocal talents with the minimum of fuss, but also allowing space for each of the sounds in the arrangement to shine. The snare in particular is a lovely specimen, full of laid-back power and tone. Although that touch of restrained brightness in the attack phase helps it cut through the texture, it’s the lower-spectrum solidity that’s really the star of the show for me, especially as it leaves a beautifully designed pocket for the tambourine layer to fit into when it arrives.

The kick drum is also pretty much my ideal of what a mid-tempo song like this should have, because it’s solid as a rock in 40-80 Hz octave, without time-domain overhang or untidy sub-bass detritus, but doesn’t draw too much attention to itself in the upper spectrum. Yes, you get enough high end to bring the rhythm through on small speakers, but the transient doesn’t come through as brash or hard-edged. However, within the context of these kick and snare sounds (and indeed the fairly upfront character of the rest of the instruments), the few tom fills do seem rather distant and diffuse, as well as suffering a good deal in the mono balance.

Another thing that caught my ear was the ambient slapback on the lead vocal, which I initially suspected to be some kind of mix effect. Listening a little more carefully, though, the ‘effect’ is following a different melodic line on “halos” at 0:20, which suggests that we’re actually hearing the ghost of a guide vocal behind an overdubbed lead. (The fairly widely-spread band setup that appears in online session photos would seem to support this theory, as the vocal spill would have had to travel a good distance before reaching other mics, hence the pronounced time delay.) A lot of project-studio engineers fight shy of allowing vocals to go down in the live room during a band tracking session, for fear of such melodic conflicts, but this production demonstrates how little that really matters in the grand scheme of things. So what if you get a bit of printed-in slapback?! As long as you factor that into the sound of the record as a whole, and you match the overdub reasonably closely to the spill, it really shouldn’t hold you back at all. On the contrary, in fact: in this case, I think it’s stylistically very suitable, it probably feels more organic than a wholly artificial slapback would have done, and it might also be distancing the lead vocal overdub less by virtue of being less similar to it. Mike Senior 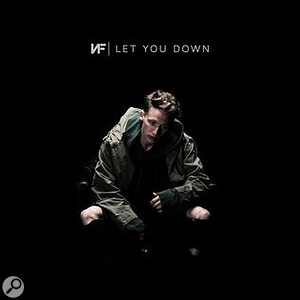 I hear a lot of project-studio mixes that are pretty much two-dimensional. What I mean by this is that they have the ‘height’ of a well-extended frequency bandwidth and the ‘width’ of a full stereo spread, but lack ‘depth’: that sense that the mix’s sound world stretches from the end of the listener’s nose all the way to the most distant horizon. Which is why the fabulous use of depth in this recent NF single really turned my head.

The song’s introduction might seem unpromising in this regard, because it’s quite ‘flat’ from a depth perspective (ie. the piano, vocal hook, bass, and strings all occupy similar subjective depth positions) as well as quite distant overall. But this serves to intensify the effect of that attentional-grabbing up-front rap pickup at 0:26, and also provides contrast with the enormous depth axis implied during the verse by the rapper’s position at one extreme and the diffuse, echoey vocal synth at the other.

The second verse is cut from the same cloth, but the third creates its depth in a different way, initially contrasting the upfront rapping with just the merest dusting of distant vocal reverb, before reintroducing the lush spaciousness of the strings. But what’s even cooler is the way that this verse gradually dries out towards its close, leaving us once again with a ‘flat’ depth perspective (albeit 100 percent up-front this time), such that the final hook section’s more varied and distant depth picture makes a bigger impact. Mike Senior

Classic Mix: Whitney Houston ‘I Will Always Love You’ (1992)

Ah, the early ’90s: it was the best of times, it was the worst of times! Best, in that this song features one of the decade’s great vocal performances, hit-meister David Foster’s beautifully paced arrangement, and a luxuriantly reverberant mix from Dave Reitzas. On the downside, that abrasive sax solo really sets my teeth on edge, and neither the electric piano at 1:08 nor the final key-change’s iconic tom ‘boooosh!’ have aged very gracefully. 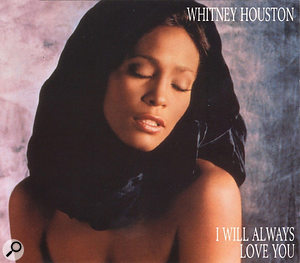 The vocal is note-worthy on so many levels. YouTube footage of Houston’s live performances show that she was one of those less common singers who move their jaw as part of the vibrato motion, and I think the effects of that are quite audible here on the chorus’s sustained word “I”. Notice how the frequencies of her vocal formants wobble in the upper mid-range at 1:55, for instance, which stands to reason if she’s modulating the shape, and hence the resonant characteristics, of her vocal tract. I also like that she varies her vibrato tactically for emotional effect, in particular delaying its onset way beyond the start of certain syllables. On the opening “I” of the second and third choruses, for example, she waits more than three seconds, while the “you” at 2:00 is also pretty impressive, at 2.5 seconds. As with Mariah Carey’s ‘Without You’ (see SOS November 2014), I think moments of restraint like these are vital if you’re going to maximise the impact of the inevitable diva histrionics in this style.

That said, Whitney can’t take all the credit here, I think, because her live performances seem significantly less restrained, and I suspect that the technical wizardry of Foster and Reitzas may have been an important factor. Although Pro Tools was in its infancy at the time, Reitzas had already built a strong reputation for digital editing using the sampler in Sony’s digital multitrack recorders, implementing different crossfade lengths, timing correction, and (in conjunction with the AMS DMX 15-80S) even pitch-correction. For evidence, check out that lumpiness towards the end of “way” at 0:34, or the word “you” at 3:57, which has what sounds like a crossfade gain-dip about a second in and a sudden change in timbral airiness after about 3.5 seconds. Further evidence of an in-depth comping process is what sounds like background crosstalk from alternate takes just before “I would only” (0:10) and “but I know” (0:23), as well as a fade-out in the background noise before “I’ll think of you” (0:27). I wish they’d also notched that 3.9kHz whistle out of the opening sibilance of “so I’ll go”, though.

Although Arista Records boss Clive Davis apparently, to Dave Foster’s chagrin, released Dave Reitzas’s rough mix, it nonetheless features plenty of great automation ‘pushes’ emphasising moments of background musical interest: the kick and bass at 1:18 and 1:22; the guitar fill at 1:36; the open hi-hat at 1:45; the keyboard pad at 2:02; the strings at 2:21; and the electric piano at 2:41. But my favourites are both bass rides, one at 2:26 emphasising the line’s juicy tritone clash with the sax solo’s first real blue note, and the other at 3:37 boldly bringing that upper-register fill note so far out of the balance that it’ll have your eye out! Mike Senior