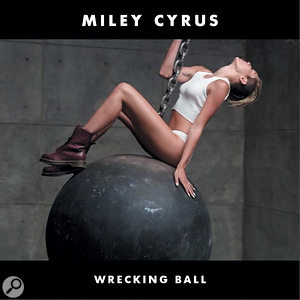 Many small details of this production caught my ear: the vinyl noise layer in the lead-up to the first and last choruses; the hint of brutally high-pass-filtered piano-bass for "we kissed” in the first verse at 0:16, prefiguring the second verse's proper bass-guitar entry under "it slowly” at 1:10; the graceful 'opening out' of the second verse with its layered "oh” backing vocal, cello, and echoey background stabs; and the middle section's canny ABCD-ABD lyrical structure, which manipulates your expectations to give an extra tug on the heart-strings for "I guess I should have let you win”.

But I have to confess to being less than whelmed by the choruses. Given all of Miley's bad-girl media posturing, I'd honestly have expected something a bit less safe-sounding, given the title of the song. Take the final work-out, for instance. Yes, the kick is pumping the backing track — big hairy deal! We get it; that's supposed to make us think the track's loud. The problem in this case, though, is that the illusion is mortally wounded by the fact that Miley's louder than God on "I came in like a...”, so the chorus entry sounds rather feeble by comparison (the drums in particular), and then Miley's levels don't really pump with the rest of the backing track, making the dynamic effect seem rather fake.

And then there are the "That's bound to make it sound more epic!” sweeping strings, which couldn't have been better calculated to render the production saccharine, as well as further homogenising the full chorus texture. Have a careful listen to what's going apart from the vocal and drums, and ask yourself this: what is actually playing? It's almost impossible to tell a lot of the time — it's just a kind of amorphous consonant sludge. It might be an orchestra. It might be a wall of guitars. It might be a rack of synths. It might be a waterfall of monosodium glutamate. It might be all of the above, but whatever it is, it sounds like it was arranged by committee during a conference call between RCA suits. Compare this with something like Katy Perry's 'Wide Awake' or Rihanna's 'Umbrella', say, and you'll hopefully hear what I mean — those songs manage to keep a whole lot more power and attitude in the backing without being any the less poptastic. Not that it appears to have hurt Miley's sales, although presumably those have been driven as much by the video's soft-porn visual offensive as by anything people's ears are telling them...

The vocal performance doesn't exactly thrill me either. While I imagine that Miley's showbiz childhood has availed her of the best vocal coaches fame can buy, there remains something rather too calculated and one-dimensional about her performance inflections, even when set against various other emotional-blunderbuss divas in the pop and R&B charts. It's the middle section that most grates on me: here she finishes every single one of the seven lines with an identical falling-whole-step curlicue and exaggerated exhalation. Enough already! Yet, despite plenty of this kind of 'peel off and stick' performance frosting throughout the song, she still frequently manages to sound like she's reading autocue, for example, during the pre-chorus at 0:24 ("Don't you ever say I just walked away...”), where her dogged adherence to the melody renders her presentation of the lyric totally pedestrian. However adult her racey new image, as a singer Miley Cyrus still has some growing up to do. Mike Senior 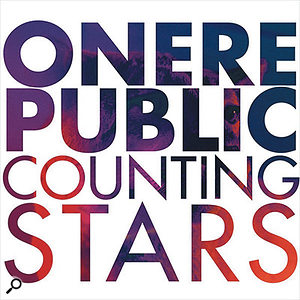 Their biggest hit since debut single 'Apologise', this production from One Republic showcases a simple means of generating a double chorus from a single one: just bump the lead line up the octave! That's not all there is to it, to be fair, because you also get a touch more percussion in the second iteration, an extra BV line, and perhaps the odd subtle guitar layer, but the octave jump easily dwarfs those things in terms of musical impact. I think it works particularly well here as a device, because it allows Ryan Tedder to shift gear dramatically in terms of his performance style, and as such this should be filed under 'stock tactics' for any other production featuring a wide-ranging and charismatic vocalist — one melody line, double the personality! Of course, it's probably worth planning for such an octave leap at the writing stage, though, because the way the specific singer's voice responds to the different octave registers is critical — get the wrong key and you'll crash and burn.

Speaking of the vocals, another thing I like is how the "we'll be, we'll be, we'll be counting stars” at the end of the second iteration of each chorus slightly wrong-foots people humming along. However, my favourite bit of arrangement trickery occurs at the end of the mid-section, where the onset of the final choruses are delayed not once, but twice: first by virtue of the textbook eight-bar build-up at 3:04-3:19 evaporating into the exposed vocal phrase-extension of "everything that kills me”; and then by the additional pause before "makes me feel alive”. Doubles all round! Mike Senior 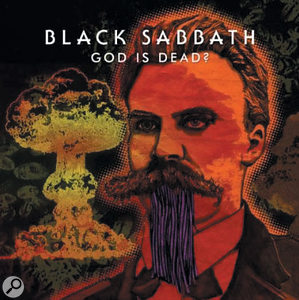 Having read about this production in SOS August 2013's 'Inside Track' column, I was keen to hear the final results — and they didn't disappoint! It's particularly impressive how heavy the band sound, given that most of the time we're effectively hearing a drum kit, a bass, and one guitar (assuming Andrew Scheps's published Pro Tools screenshot is to be believed). Any three-piece band presents a problem in stereo, though: if you don't pan anything you get clutter in the centre of the stereo image, but if you pan the guitar to one side it imbalances the mix's overall image. In this case, Andrew Scheps has squared the circle by panning the guitar multi-mic signals to the left and right extremes, thereby spreading the instrument right across the panorama, and there's no denying the impact of this in stereo. However, this mix also neatly demonstrates the drawback of doing this in terms of mono-compatibility, because the guitars really take a hit when the stereo channels are summed, becoming both much quieter and quite a lot duller. Personally, I think this is a pity, because I reckon there might have been a better compromise to be struck here by using some kind of variable phase shifter in one of the channels, given that the guitars in the mix's Sides component actually seem brighter and louder than those in the Middle component.

One other thing I noticed in the Pro Tools screenshot was a series of unused audio snippets at the start of the song, just above the vocal tracks. Only one of these (the purple-coloured ones labelled 'Zombies') appears to have made the final cut, and only at a tastefully restrained level if it's the howling noise you can hear during the song's cleaner-sounding intro/verse sections. Given that I'd never in my life have imagined using the words 'tastefully restrained' about anything with Ozzy Osbourne's paw prints on, I can only feel the deepest respect for producer Rick Rubin! It's so easy to over-egg atmospheric sound-effects, leaving the listener little scope to use their own imagination, whereas here you actually have to flex your hearing muscles a bit to disentangle the howls from the guitar overtones. Did you really hear that, or just imagine it? And are you now starting to hear other things which really aren't there? As with many great horror films, what's most unsettling is what isn't shown, not what is, because each viewer populates the shadows with the products of their own nightmares. Mike Senior

The '80s was the heyday of the drum machine, with producers far and wide rejoicing in the ability to make drum parts tonally consistent, metronomic, and endlessly revisable. Rock bands who tried to take 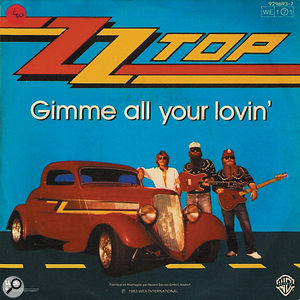 advantage of such new-fangled doobries, however, inevitably encountered problems in retaining any sense of live performance, on account of the lack of sophistication of early rhythm boxes. This production from ZZ Top's mega-selling album Eliminator demonstrates some of the workarounds frequently employed.

The first issue was that synthetic cymbal sounds were absolutely dire, but digital memory was still so expensive that it simply wasn't practical to sample a four-second cymbal hit in stereo. Hence cymbals, being less timing-critical than the kick and snare, were routinely overdubbed, and it certainly sounds that way in this instance. Likewise, any part that required more than the very limited musicality displayed in the triplet snare fill at 1:31 simply had to be played in by hand — most obviously the slightly dislocated-sounding tom fill at 2:59. I also suspect that the hi-hat was overdubbed for this reason (most noticeably during the introduction), and is that an overdubbed ride during the solo at 1:34-2:22 too? The other main problem with first-generation machine drums was a difficulty in injecting any humanity or groove — while the basic beat during the first verse and chorus has that kind of unstoppable juggernaut momentum that all metronomic patterns do, the fear was that they'd start plodding if left that way throughout. Hence that old standby, the tambourine, sashays in at 0:57, and it's 'Hello there stereo shakers! Back so soon?' at 3:01.

So what relevance does all that have nowadays? Well, you'd have thought that all the latest technology might render these kinds of workarounds obsolete, but in my opinion they're pretty much as useful as they ever were, simply because so few people seem to be able to get a musical-sounding result out of sample sets or virtual drum kit instruments within any reasonable time-frame. Sure, many bits of software are now capable of extremely musical end results, but I only ever hear them living up to their promise in project studios on those rare occasions when they're driven by someone who understands their inner workings and has the technical skills to program them sensitively.

So whenever you hear a second-rate programmed drum kit, I trust you'll think of Eliminator. Hang on, that didn't come out quite right... Mike Senior