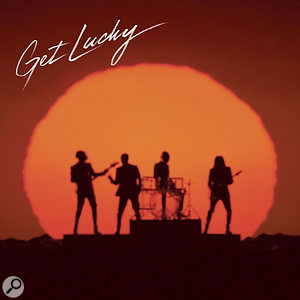 Lots has been said about the production values of Daft Punk's album Random Access Memories (not least in our own July 2013 cover feature!), so any budding engineer owes it to themselves to give at least this single a considered listen. Most chart-oriented tracks these days are constantly hitting you over the head with sudden, extrovert arrangement changes designed to retain your attention, so the laid-back and groove-oriented approach of 'Get Lucky' already marks itself out as unusual. However, shifting the instrumental textures as subtly as this between sections would probably have backfired had Daft Punk not employed the services of so many talented live musicians, because it's the human nuances of their performances that really help to keep the listener's interest, I think: in particular Omar Hakim's sensitive hi-hat and cymbal work, Nathan East's funky bass grumblings and Nile Rodgers' nimble guitar rhythms.

For such a clear-sounding mix, there's also an impressive spaciousness, even though the effects appear to have been added with a pretty light touch. The hint of live ambience on the drums is part of the magic formula, I think, as is a well-defined contrast between the centrally located kick/bass/guitar axis and the wider piano, keyboard, reverbed backbeat and panned vocal layers. The minimal-feedback eighth-note delay on the vocals is another key feature for me too, giving a clearly audible 'effected' character with very little 'tail' to clutter the mix between phrases.

For dance music afficionados, the way the kick and bass fit together will naturally be a subject of some debate. A classic disco approach is to give the kick its power base around 50Hz, with the bass part concentrating on the 75 to 150 Hz zone to transmit a sense of warmth and fullness. While that model appears to have been adopted here in general, Daft Punk have also taken advantage of the extended low end of modern digital playback media, allowing significant sub-bass energy from the bass line to underpin the kick — whether it's coming directly from a DI'd five-string bass or has been added surreptiously from some kind of synth or subharmonic processor at the mix, I'm not sure.

The 350Hz zone is crucial to this bass tone as well, providing that tasteful 'growl' that pulls the player's melodic contributions forward in the mix and really helps define the sound on smaller speakers. That spectral area is very much a danger zone in terms of low midrange muddiness, though, so it's no surprise that the bassless sections on the longer album version reveal that the other backing parts have been deliberately designed and/or EQ'd to keep those frequencies fairly clear for the bassist's use. Mike Senior

Bluegrass is more about albums than singles, but this song is a good place to start if you've yet to discover the Steep Canyon Rangers' Grammy-winning Nobody Knows You. Recorded and mixed by veteran Bluegrass supremo Gary Paczosa, it's a thing of beauty from an engineering perspective, and would make an excellent quality benchmark for any student of acoustic ensemble recording. Fiddle, mandolin and banjo can all sound ferociously scratchy in the wrong circumstances, so it's marvellous to hear them all so smoothly and warmly captured, allowing the lead vocal to maintain its frontal position effortlessly, without any need to overplay the nasality of the Southern twang. The bass is enviably controlled too, with a touch of 70Hz resonance playing into the musicians' hands, emphasising the key's root note. The instrument comes through beautifully on small speakers, as does the ensemble balance as a whole. 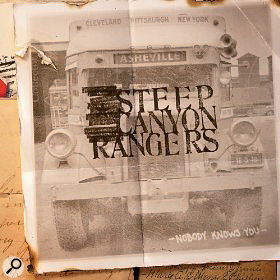 The stereo picture is equally delicious. Each instrument has its own well-defined zone: the guitar and banjo balance each other on opposite flanks, as do the mandolin and fiddle at centre-left/right, leaving the bass and vocals to claim the centre ground. Despite this, however, the sense of cohesion across the ensemble is magnificent, so that the band is presented as an organic whole, rather than as a set of discrete single-point sound sources. If this is something you struggle to achieve with your own recordings — and many small-studio engineers do — bear in mind that Bluegrass records are often tracked live in one room, and that Paczosa, like a lot of his peers on the scene, actually capture most of the instruments in stereo, even though they may only spread each pair of microphones a little way across the panorama at mixdown. In this specific case, for instance, notice how the apparently wide-panned banjo and guitar parts are each clearly audible (although with less presence) in the opposite stereo channel, which suggests we're hearing both of them through more than one mic apiece.

Finally, this mix is a masterclass in tasteful fader automation. This kind of uptempo texture is tremendously busy, so it really serves the music that the microphone balances are constantly being adjusted to pull out particularly interesting little licks and fills (for example the high banjo line at 0:43, the fiddle at 1:54, and the guitar at 2:59) — it makes the music feel more accessible and melodic to the casual listener, in my view. And of course it's lovely to have the spectacular soloing nicely spotlighted in this way at 1:54-2:29 too. Mike Senior

Once my inner schoolboy had stopped snickering at this tune's undeniably flatulent kick sound, I found myself increasingly annoyed by this track. On a general level, it feels like the Timberlake/Timbaland team have now been mining a very similar vein with diminishing musical returns for more than a decade, starting with the admittedly splendid 'Cry Me A River' on Justified, progressing to the paler derivative of 'What Goes Around' on FutureSex/LoveSounds, and ending up with a threadbare patchwork of the two on this latest single from new album The 20/20 Experience: it's no use stapling the beatbox sounds of the former to the smooth strings of the latter if the songwriting and vocal arrangements are nowhere near as ear-catching. That said, the sales performance of each of these songs appears to have gone from strength to strength, so we should probably resign ourselves to further milking of this particular cash cow on album number four... 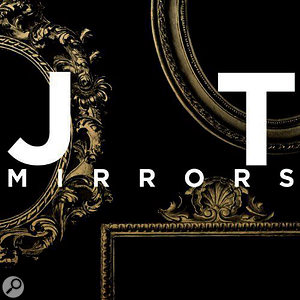 On a more specific level, though, what a waste of live strings! Having presumably blown an entire indie record's budget hiring a full string section, Bill Putnam's former studio and the arranger who graced Michael Jackson's 'Rock With You', I'd have hoped for something more than a succession of bland block chords and a handful of rather four-square melodic snippets during the middle section ("yesterday is history...”). Honestly, I'd expect any jobbing multimedia composer to coax something like that out of a sample-based virtual instrument within three quarters of an hour. I'm not a tremendous fan of the way the strings are mixed, either. The already fairly restrained HF string tone is masked so heavily by other parts that there's little to differentiate it from that of a simple synth pad 95 percent of the time. But even on those occasions where the string character really becomes discernable enough to attract attention (for example, during the middle section at 3:20-3:42 in the full-length version), the orchestra is so low in level compared with the beatboxed percussion, claps, breathy backing vocals and clean electric guitars that it sounds a million miles away, as well as rather diddy overall. A bit of a shot in the foot if the Timb-twins were hoping their big spend would borrow them some classical grandeur. Mike Senior

Check the SOS forum for more comments on the tracks discussed in The Mix Review this month: /mixreview

The '80s were the heyday of pads, and if you can withstand this song's tidal wave of smug sentimentality, then their role here repays close scrutiny. There are three main parts in action: the mellow synth strings that underpin the verses, the synth choir that announces the chorus and the double-tracked 'ooh' backing vocals that provide an extra feel-good lift for the intro/link/outro sections at 0:07, 1:40 and 3:26. Although the basic way each pad is used to signpost the song's structural boundaries is nothing special, there are some nuances to consider. For example, the stereo width of each has been sensibly chosen, with the strings feeling narrower than the choir, and the BVs wider, and this very much supports their respective roles in the production as a whole. 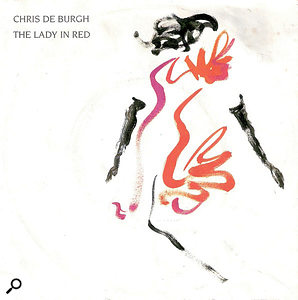 Another nice touch is that the choir pad doesn't sustain right through the choruses, as would have been the lazy reflex, but cuts out after the first two bars of every four. Given the comparatively static nature of pads in general, they tend to make their biggest impact when they arrive and depart, and are quickly disregarded by the ear in favour of more interesting sounds the rest of the time. As a result, bringing that choir synth in and out gets much better musical value out of it, as well as allowing other details of the arrangement and vocal performance to be better appreciated during the second half of each four-bar block. Furthermore, once the alternating on/off pattern has been established, it provides the opportunity to confound that expectation for dramatic effect at the end of the third chorus. So you can hear that a third bar is added to emphasise the unexpected chord which signals the beginning of the four-bar chorus extension at 3:14, and then when we reach the word "forget” for the second time, it's left without the choir pad that supported it on the two previous occasions, thinning out the song's texture briefly in order to set the all-pads-blazing outro into stronger relief.

That particular pad also demonstrates how synths can effectively masquerade as delay/reverb in terms of their function in a mix. Have a listen for how the word "red” at the beginning of the chorus feels much fuller and more sustained, very much as if it's had extra effects added to it. The end of "me” two bars later feels much more abrupt by comparison, despite the fact that De Burgh doesn't actually seem to shut that word off any quicker once you focus your ear on the vocal part alone. So successfully does the synth-choir doubling note merge with the word "red” that it only reveals its true identity once the voice stops singing, and if the producer had faded it out at that moment you'd be forgiven for missing the presence of any new layer at all — a useful lesson for anyone wanting to reap the benefits of pads within more contemporary production contexts. Mike Senior