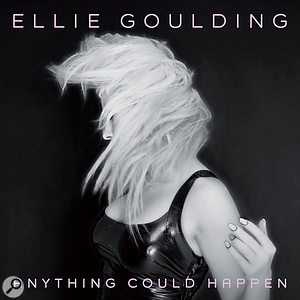 This production has one of the oddest lead-vocal effects treatments I've heard for a while, which brings to my mind a vivid image that she's shivering uncontrollably! Listening carefully to the moments when it's most audible (such as "cover your eyes so you don't know the secret” at 0:19), it sounds a little like an audio vibrato processor, using an 8-10Hz modulation rate. (This isn't the most common of effects; track down Melda's freeware MVibrato plug-in if you fancy experimenting.) However, the pitch modulation isn't that consistent, and neither does it undermine the stability of Ellie's tuning, so either there's some automation of vibrato settings going on, or (more likely) it's the kind of per-note synthetic vibrato offered by Antares Auto-Tune or Waves Tune. I initially wondered whether there might be some unmodulated signal mixed in, to keep the subjective pitching solid, but this would have created an obvious (and quite different) chorus/ADT timbre.

The verse vocal's effect tail is surprisingly long, extending for about four seconds after 'river' at 0:13, but the vocal remains clear and up-front, and there's no sense that the mix is being swamped. I often hear home-brew mixes that struggle to retain this kind of clarity when similarly expansive 'feature' effects are added, so let me suggest how I think it's been achieved here.

To state the most obvious thing first, the level of the effect is actually quite low in the mix — a little of this kind of thing goes a long way! The nature of the patch is also part of the equation, because it's not just a standard long reverb. There are no early reflections to speak of, which prevents the patch from distancing the singer in the way early reflections can easily do, and I suspect that we're hearing at least as much delay as reverb, which helps reduce the density and complexity of the echoes/reflections in the effect tail, and hence the effect's potential to mask other components in the mix. In addition, the effect signal is quite efficient in its use of the frequency spectrum, jettisoning the majority of its mid-range and focusing on warm lower-mids (for almost classical-style envelopment and warmth) and a sheen of upper-spectrum fizz (ensuring that the effect catches the ear in its own right), without interfering much with the mix separation in the crucial ringtone-friendly 1-5kHz zone. Finally, it sounds to me as if the effect send has been heavily de-essed, because otherwise I'd expect the vocal sibilants to be bouncing around in the upper octave of the reverb return and distracting from the dry lyrics. Mike Senior

Sam And The Womp 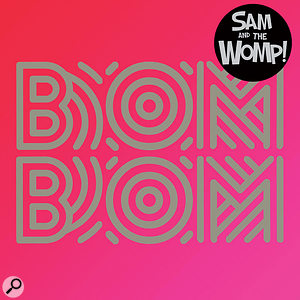 The vocal absolutely makes this record for me — a fantastic and uninhibited performance from vocalist Bloem de Ligny. It's tough making any rap expressive and characterful enough to arrest the listener's attention in its own right, which is why bland and monotonous delivery is the scourge of second-rate hip-hop. It's thus instructive to examine how this lead line pushes towards the other extreme, hamming things up to a point well outside the expressive range of normal speech. I particularly like the way she takes advantage of the pitch range of her voice. For a small-scale example, take the first instance of "bom bom bom” at 0:14, where you get three distinct onset pitches, the third with a pronounced up-down sweep. Imagine how much less effective this would have been had Bloem simply marked the rhythm and kept the pitch the same. Zooming out a bit to look at that whole first verse, check out the way she shifts register to differentiate her different phrases, too: upwards for "how charming” (0:19), "ooh ah ah” (0:29), and the final "bom bom bom” (0:41); and downwards for "what's grooving” (0:15) and "pints of rum” (0:24). The way she modulates the force of her delivery, between the exaggerated breathiness of "what's grooving” and the forced Björk-alike growl of "rum”, is also great.

Something else that caught my ear was the super-bright reverb on the brass, which is laid bare for inspection during the solo section at 1:17. You wouldn't often dial up a patch like this out of choice, but it's perfect here, emphasising the upper frequencies of the brass (and, indeed, the mix as a whole), but at the same time sounding so unnatural that it doesn't really push the brass backwards in the mix's depth perspective at all. The hard L-R panning of the brass layers undermines the blending effect of the reverb too, by placing the dry sound at the edge of the simulated acoustic, rather than within it. Mike Senior 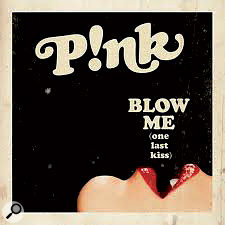 Prompted by their similarity of style, I decided to compare this song with Kelly Clarkson's 'Stronger', critiqued in SOS September 2012. It turns out that both were mixed by the same person and mastered at Sterling Sound — although by different mastering engineers. The main difference for me is that the Pink track has more of a 'smile' curve to its EQ profile, such that the Clarkson sounds slightly boxy, by comparison, on larger systems. However, move onto a smaller speaker and the recessed mid-range of 'Blow Me' starts to become rather gutless — the kick and snare lose power and the lead vocal doesn't have the same kind of subjective 'size'. Pink's low end also seems to cause more problems with intelligibility in distorted playback conditions.

The density of the mid-range backing instruments during each song's choruses is another significant point of divergence. Pink's team seem to have favoured vocal clarity, so have given less emphasis to backing parts in this spectral region, whereas in 'Stronger', the backing delivers much more subjective power in the same region, although at the cost of masking Clarkson's vocal inflections more heavily.

In short, 'Blow Me' seems, to me, better suited to car stereos and home mini-systems than 'Stronger', but less well suited to smaller, cheaper devices with built-in speakers. Could this have contributed to Clarkson's single outselling Pink's? I'm sure I won't be the only person asking that question... Mike Senior 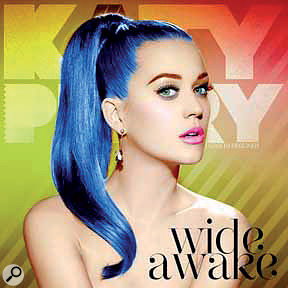 One hallmark of a great pop producer is the ability to tap into the unrealised potential of ideas that others dismiss as laughably simple, so I beg leave to respectfully doff my cap in the direction of Dr Luke and Cirkut. While the concept of sweeping a low-pass filter over groups of backing parts is neither new nor clever, these guys have found a fresh angle by slowing down the sweeps on their backing synths to the point where they graduate into a structural device, reinforcing the musical momentum of the song. Let me explain.

The degree of filtering used at the beginning of the song is roughly the same as at the start of verse two (1:12), and the beginnings of the first two choruses (0:49 and 1:49) are also pretty comparable in this respect. This means that the sweep in the second verse has to be significantly faster, which makes sense for creating emotional build-up through the first part of the song. Then the filtering seems to open a touch further during the middle section (2:12-2:36), providing denser highs to support the increase in musical intensity. However, that leaves nowhere to go for the final choruses at 2:48, so the producers generate additional impact at that point by preparing it with a more dramatic build-up during the drop section at 2:36: the filters close down even further than at the start of the song, and then sweep up much faster to hit their fully-open setting 12 seconds later. At which point I re-doff my cap when the sixteenth-note rhythmic pulse that's underpinned the entire song thus far is muted, jolting me into refocusing my attention on the final chorus, and acting as a point of contrast that subjectively increases the apparent power of the song's fullest texture. Mike Senior 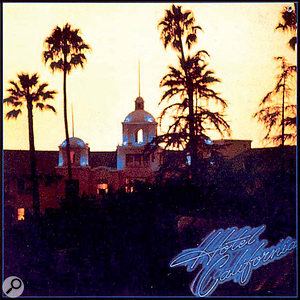 Re-reading SOS September 2010's 'Classic Tracks' feature about this track, I smiled at producer Bill Szymczyk's assertion that the drums were "kept as open as possible.” I can only assume that Studio C at Criteria must have been dead as a doornail acoustically, because this sound is pretty much the archetype of a tight, dry, hard-panned '70s rock kit. I'm not complaining, because it's a lovely sound. The kick has an efficient meatiness in the 70-80Hz zone, leaving most of the low end open for the athletic bass line, while the tasteful 700-800Hz peak was ample to cater for radio compatibility before the following decade's HF arms-race really got going. The snare and toms are replete with low-end goodness, too, rather than relying on their HF to punch through, and the hi-hat capture balances the needs of stick-attack definition and rich sustain masterfully — an important issue, given the intricate hat work at 3:28-3:50. Even the cymbal hits are rich, which is often a challenge in dry acoustics, although I would have liked them more full in the stereo picture, because they feel a bit constricted panned hard with the hat.

Leaving aside the oblique lyrics, the main thing people wax lyrical about with this production is the outro's solo guitar. I agree that the parts are great, but I think people underestimate the contribution made by the rhythm instruments to the power of this section, so let me mention a couple of things that stand out to me. Firstly, it's noticeable that the solo parts frequently come to rest towards the end of every two-bar musical unit, leaving room for the bass/drum fills to shine and taking the listener on frequent little detours. Particularly good examples are at 4:50 and 5:15, but it's a theme throughout. To me, this is one of the reasons why these guitar solos can hold your attention for such an extended period of time, because the constant (and varied) punctuations are constantly returning you to the guitars with refreshed attention.

The other thing that always strikes me when we reach the climactic two-part guitar riff at 5:38 is how the bass finally abandons the wilful independence of its reggae-tinged moves thus far, throwing in its lot with the guitar's straight sixteenth-notes. It's this, as much as anything the guitarists are doing, that really lifts this moment into the classic rock stratosphere. Mike Senior