There are many people who would say that software is killing the hardware market. This is certainly not a good thing as far as I'm concerned, as I continue to buck the trend by running an entirely hardware setup: multitracker, sequencer, samplers, synths, effects, mixer, and not a Mac or PC in sight. This is not to say that I'm not a great fan of the power of software and what it can do, it's just that I'm one of those fossils who think that my system simply shouldn't malfunction while I'm making music. I've enough trouble stringing two ideas together as it is without a computer sticking an error message between them. 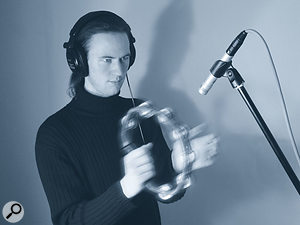 I have worked with a very reliable Roland VS880 multitracker for five or six years now. Admittedly, it has crashed twice in that time, but I've worked out what specific combination of simultaneous actions was causing it, and now avoid them. The bottom line is that I feel I've had extremely reliable performance, which has not interfered with my creative impulses. Likewise, my Yamaha QY700 sequencer has only crashed once in three years (when I fed it a duff disk) and nothing was lost. My Korg Prophecy and Akai S2800i sampler have never crashed. Neither have any of my hardware effects units. The longest my system has been down for technical reasons was when the sampler's 10-year-old power supply needed mending.

I would wager that most of those musicians currently propping up the studio hardware market also value dedicated music technology kit for its reliability. And that bastion of hardware sales that is the live performance market is, I'm sure, built partly upon the fear of a software crash attracting hundreds of flying bottles from the crowd.

But, sadly, the reliability of dedicated hardware seems to me to be decreasing. I first really noticed it with the Akai S5000 sampler. At the time of its release I was working in a commercial studio with a producer who had decided (based, I imagine, on Akai's reputation for rock-solid reliability) to use a brand-new S5000 for all the programmed elements in the project. I asked him to send over the manual so that I could get up to speed, but when he arrived and set up, we quickly found that the actual hardware was but a pale shadow of what the manual claimed it to be — it couldn't even format a floppy disk! Trying to coax the required performance out of the thing left no one in a mood conducive to music-making, and waiting for upgrades cost at least a full day of the session.

When I started working at SOS, I realised that such problems were increasingly frequent with the gear that came in for review. The Waldorf Q synthesizer's operating system was seriously buggy when it went on sale. The Mackie HDR2496 had a number of features missing. The Roland MC307 had seriously unstable MIDI timing. Many pieces of hardware now seem prone to a weekly crash or two — I've been using a new, top-of-the-range multitracker recently and was incensed to have it crash on me twice during the same mixing session, losing me an hour's work and completely disrupting what should have been an organic and fluid process.

While tearing out clumps of hair, the following thought crossed my mind: "Why on earth am I using a hardware system that's crashing as often as a more powerful software system costing less?" (I'll admit that the wording at the time was a little more florid.) As a hardware user, there's only so far you can proceed down the software mindset of saving every 30 seconds and backing up every day, before a software system actually seems like less hassle — I use about a dozen pieces of gear with some type of software at their core, and mine's quite a small setup! And, of course, once a user decides to switch to a computer system because his multitracker isn't worth the effort, then how long is it before his effects, synths and sampler go the same way? After all, the computer and interface hardware are already paid for...

So my point is that computer software is by no means the only thing undermining the hardware market. The hardware manufacturers are also bringing some of this on themselves by thinking that their user base will accept the reliability levels of computer software from their equipment. Hardware users expect hardware to be more reliable than software, and so even a slightly buggy OS (by computer software standards) is pretty likely to significantly damage sales. And, of course, if there are no sales, then how long will the company throw money at software development to make the unit perform as it should have in the first place? So users switch to cheaper, more powerful, and no less reliable software, while hardware manufacturers go out of business.

Mike Senior is SOS Reviews Editor. He is also a hardware evangelist. Or hardware bigot, depending on your perspective.