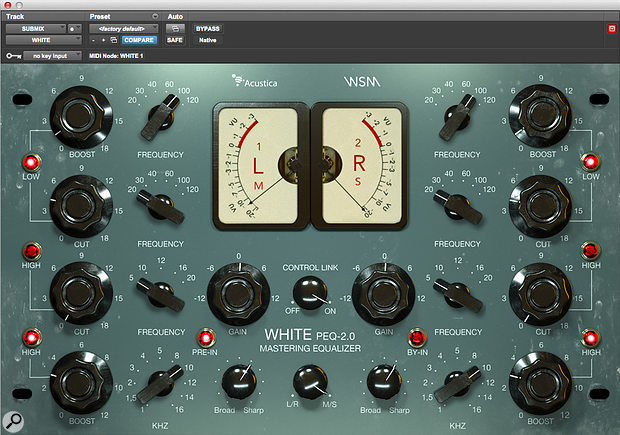 Acustica Audio’s new Acqua series of plug-ins are painstakingly ‘sampled’ from high-end hardware. Does the end justify the means?

When software developers aim to capture the sound of studio hardware in plug-in format, they’ll usually employ some sort of algorithmic modelling technique to do so. In theory, this has quite a few advantages. Modelling plug-ins typically require relatively little memory or drive space; it’s often possible to optimise the code so that they run very efficiently; and it’s possible to add additional features that aren’t available on the original. But do they fully capture what’s special about the sound of the hardware?

Quite a few engineers still feel that the answer to this question is ‘No’, which is why Acustica Audio’s Nebula has such a devoted following. Nebula uses an alternative technique called dynamic convolution. Basic convolution, as used in most convolution reverbs, is carried out by sending a single impulse response through a piece of equipment or an acoustic space and capturing the results. As such, it assumes the same behaviour at all signal levels, so it’s not capable of capturing non-linear effects such as saturation.

Dynamic convolution overcomes this limitation by making lots of measurements at different signal levels, and interpolating between them. You could draw an analogy with sampling: standard convolution is like taking a single sample of an instrument, while dynamic convolution is akin to multisampling at different velocity levels. Dynamic convolution conspicuously lacks the above-mentioned advantages of modelling. It places a heavy burden on the host computer’s CPU and memory resources, and as you multiply the number of different settings that need to be ‘sampled’ — for instance on a complex piece of equipment — the necessary library of impulse responses can grow to unwieldy proportions. But if dynamic convolution has remained the province of obsessive tweakheads rather than working audio engineers, that’s also partly down to the design of Nebula. No-one denies the quality of the results that can be obtained using Acustica’s flagship program, but for many, the process of obtaining those results has just been too painful.

To Acustica’s credit, they’ve recognised that if dynamic convolution is to enter the mainstream, it needs to be simpler to use. Recent versions of Nebula have improved considerably in this respect, but of course the reality is that most of us will never actually get around to making our own IR libraries, or even editing other people’s. What most people need is not a single, all-powerful convolver that takes years to master, but individual tools that sound great, are easy to use and don’t make your computer fall over just by existing. And that’s exactly what Acustica are promising with their new Acqua series of plug-ins.

In essence, what Acustica have done with each of these plug-ins is to laboriously ‘sample’ a single audio device and package the results within a custom plug-in interface. The Acqua plug-ins use Acustica’s latest Core7 engine, which supports multithreading and offers a number of advanced features ‘under the bonnet’, so although they can still impose a hefty load on your computer, they’re slicker than earlier implementations of dynamic convolution. Most importantly, from the user’s point of view, you can treat them just as you would any other plug-in: load one into a DAW insert slot, open up the graphical user interface, and move the controls around until it sounds how you want it.

At the time of writing, there are already no fewer than 19 plug-ins in the Acqua range, but this review will focus on the White equaliser, which is unique in being an officially licensed recreation of a hardware original — the original being, in this case, a high-end mastering equaliser designed by WSM Labs and based loosely on the classic Pultec EQP1A.

The installer actually adds two separate plug-ins to your system: the standard White and a White ZL version, which operates at zero latency and is thus suitable for use when tracking. Unfortunately, there is one hurdle that has to be overcome before you can dive in. Old habits die hard, and Acustica’s new-found user-friendliness is undermined by a slightly baroque authorisation process. This involves sending a product authorisation request to Acustica’s server, waiting for their ‘global key generator’ to churn out a licence, and manually dropping this within all the Acustica plug-in folders on your system. It’s mildly annoying for one Acqua plug-in and would be a complete pain in the neck if you were installing many of them at once.

As the screen capture that heads this review shows, the White interface definitely looks the part, with its large and beautifully rendered photorealistic controls. Looks aren’t everything, though, and I have to say that once you start engaging with the White interface, it’s rather less satisfying. On my computer, there was an irritating lag of half a second or so in response to any user input, and the impressive look of the rotary switches is undermined by the rather hesitant and vague way they move when adjusted. It’s a bit like reaching for a gorgeous Bakelite dial only to find that it’s been attached to a cheap Maplin pot!

Acustica seem to have created a real buzz with their Acqua plug-ins and with White in particular, which has earned rave recommendations from some very well-respected engineers. Feature-wise, it follows the Pultec EQP1A in offering low- and high-shelving boost and cut (with continuous rather than stepped gain), but expands upon it in a couple of ways. Both the high and low bands have more switched frequency options than are available on a Pultec, and most significantly, it’s possible to select different frequencies for the boost and cut. White defaults to dual-mono mode, but can be stereo-linked or switched to M-S operation, where the left channel’s controls adjust the Mid frequncies and the right channel the Sides. There’s also a valve gain make-up section, which can be introduced into the signal chain even if you’re not using the EQ at all.

In the past, I’ve struggled to fit Pultec-style EQs into my way of working. Master bus EQ is usually something I add towards the end of the mixing process; having got the overall frequency balance as close as possible using channel-based processing, global EQ is about providing the final touches, and a Pultec always seems too broad a brush. You can’t use an EQP1A to dip out that hint of muddiness at 180Hz, or add a tightly focused boost in the upper mid-range, or tame the boxiness that can accumulate in the 400Hz region. So, having installed White and jumped through the authorisation hoops, I found myself scratching my head as to what to do with it.

To answer this question, I talked to a couple of the engineers who recommended White to me, including SOS’s own Jack Ruston. Their advice was to use White, or indeed any similar mastering equaliser, in a more ‘top down’ context: beginning with a rough faders-up balance, insert White over the master bus and adjust until the overall spectral balance of the mix is where you want it. You can then turn your attention to the individual channels and, all being well, you should find that the presence of the master EQ means less work is required in this department. Result: a faster and less frustrating approach to mixing, at least in theory.

When you work in this way, the quality of your master bus EQ is paramount, because it’s playing a much more fundamental role in shaping the sound of your mix. And those who swear by Acustica’s White in this role definitely have a point, because it does sound very different from the other EQs I tried. More to the point, it sounds better. In particular, the effect of a high shelving boost in White is euphonic in a way that’s a little hard to describe. It’s almost as though there is some sort of compression at work in the way it seems to thicken up or fill out the frequency region that’s being boosted, without exaggerating peaks within that region. For instance, you can apply a hefty treble lift stretching all the way down to 1.5 or 2 kHz without things starting to sound thin or tinny, and without things like vocal sibilants or hi-hats poking out of the mix. If your experience of plug-in EQ on the master bus is that it has quite a narrow ‘sweet spot’, it’s refreshing to be able to sweep the White controls around all over the place and hear a variety of different good sounds, rather than one good sound and a lot of obviously wrong ones!

And, of course, you don’t have to use White on the master bus. It’s equally effective at altering the sonics of individual sources and buses, and again, the range of settings that sounds good just seems broader than is the case with most plug-in EQs. If the mood takes you, you can also employ the classic Pultec trick of cutting and boosting at the same frequency, and the provision of separate frequency settings for cutting and boosting opens up many new possibilities in this department. However, you’d need an extremely powerful computer to use White as your default channel EQ on a busy mix. I tested it on an ‘early 2014’ MacBook Air with a 1.4GHz Intel i5 CPU and 8GB RAM, and if the System Usage window in Pro Tools is to be trusted, each instance of White used some 6 percent of this memory, and between 10 and 20 percent of a single core’s CPU load, depending on how many bands were in use. You can almost feel the burden on the machine — even simple actions like dragging White to a different plug-in slot or opening the GUI are much slower than with any other plug-in I have installed.

At the end of the day, though, the old adage that you get what you pay for applies just as much to system resources as it does to money. The word on the street is that here, finally, is a plug-in EQ that might just satisfy those who feel that previous efforts have never matched up to high-quality analogue units; and for many people, I think the price of a heavy CPU load and clunky interface will be one well worth paying for the way this EQ sounds. Very occasionally, when you try out a piece of equipment, your instant reaction is ‘Wow, that just sounds like a record!’ It happened to me the first time I used a Neumann U87 — and it happened to me with Acustica’s White.

Acustica Audio’s Acqua range deserves to bring dynamic convolution to a much wider user base. If your computer can handle White, your ears will love it!