Akai will be best known to SOS readers for their samplers and ever-popular MPC range - so what can they bring to the controller keyboard party?

Small wonder, then, that manufacturers best-known for their hardware instruments should be turning their attention to computer-friendly MIDI controllers that draw on their experience as instrument builders, while acknowledging the current trend towards the 'virtual' in sound sources. Despite their proliferation, there isn't all that much variation in the world of USB MIDI controllers. Almost all of them are based around synthesizer-style keyboards; some provide drum or percussion pads (most often designed to be played with fingers rather than sticks); a few combine both. Knobs and sliders, to which continuous controllers (and other kinds of MIDI messages) can be assigned, are common, with most manufacturers adopting a more-is-better approach. Some of the more upmarket models may attempt to ease the process of controller mapping by automating it in one way or another. So where does Akai's offering fit in?

What Have We Here?

The MPK49 is supplied with a printed 'quickstart' manual, a PDF version of the same, and a more extensive PDF reference manual. The PDFs arrive on an installation CD, along with (some of) the bundled software (see the 'Bundled Software' box). The MPK49 is a genuine 'plug and play' device; under Windows XP or Vista and Mac OS X, no drivers need to be installed.

First impressions are generally positive. The MPK49 measures 730 x 300 x 100mm, and feels large. It actually couldn't be much narrower and still accommodate its 49 full-sized keys, but the top panel appears quite a lot deeper than most comparable devices. It's easily spacious enough to host the 12 MPC-style percussion pads (in four rows of three) and allows plenty of room around the various knobs, buttons and faders. Most of the controls have large, clear labels printed alongside and the overall look is clean, uncluttered and utilitarian. On the back panel are a pair of standard MIDI ports (one In, one Out, allowing the unit to function as a basic MIDI interface), a standard USB socket, and a socket for connecting an optional mains adaptor (6V, 1A, not included). Normally the MPK49 will draw its power via USB. Finally, there are quarter-inch jack sockets for connecting sustain and expression pedals. The semi-weighted keyboard provides both velocity and aftertouch sensitivity, both of which can be switched on or off. Variable velocity curves (for example, linear or logarithmic) are not available. The keys perhaps feel slightly 'springier' than those of some semi-weighted keyboards I've tried, but not in a bad way. The keyboard's range can be transposed up or down, giving access to a 10-octave range in total. At the left-hand end of the keyboard are the pitch-bend and modulation wheels, which are large and chunky, with comfortable rubberised surfaces and fingertip-sized indentations at their centre points. The pitch-bend wheel is spring-loaded and sends pitch-bend data only, while the modulation wheel is free and can be assigned a variety of continuous controllers. Both feel weighty and solid. When the MPK49 is powered on, the wheels are illuminated from beneath by yellow LEDs. This might be helpful for gigs in low-light conditions — but mostly it just looks rather cool. The MPK49 has a large, bright-blue, backlit display, which is clear and easy to read. Beneath it sits two rows of buttons, the second of which is a handy set of sequencer transport controls (rewind, fast forward, stop, play and record). A knob to the right of the display allows you to change between 'presets', a preset being simply a record of all the current controller assignments. There are 30 preset slots available, all of which can save user settings. The first 16 contain useful pre-programmed templates for software including Ableton Live Lite (included with the MPK49 — again, see the 'Bundled Software' box), Reason, Cubase, Sonar and various other applications and plug-ins. There are eight controller knobs and, beneath them, eight faders. These can be used to send control change or aftertouch data, and the knobs (which are endless rotary encoders) can also be set up to function as increment/decrement controls. The knobs and faders are big and comfortable, and benefit from the extra space the large panel allows. The faders feel a little bit on the flimsy side, with a slightly loose side-to-side 'wiggle' that's quite out of keeping with the rest of the keyboard's robust feel. In fact one of the faders managed to get a bit bent out of shape somewhere en route to me from the distributor, the metal post losing its plastic cap in the process. I was able to straighten the post and re-fit the cap (which was loose in the bottom of the box), and the affected fader was restored to full health. Even so, this perhaps points to a weak point in the MPK49's otherwise sturdy design. The faders will be fine for normal home or studio use, but gigging musicians will need to be a bit careful with them. Beneath the faders are eight freely assignable buttons, which illuminate when activated (and also double up as 'Time Division' controls — see below). For the buttons, faders and knobs alike, three 'control banks' are available (A, B and C). The control-bank button acts as a kind of shift key: one set of MIDI messages can be assigned when control bank A is active, another for control bank B and another for control bank C. Each set of eight controls effectively becomes a set of 24 controls (accessible in groups of eight at a time). 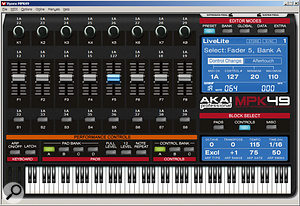 Photo: Mike CameronIncluded on the MPK49's installation disc is a handy preset editor and librarian application, in both Windows and Mac OS X versions. The splash screen announces that it was developed by PsiCraft, and based on Sound Quest's highly-regarded MIDI Quest universal editor and librarian.

The editor does pretty much what you'd expect, connecting to the MPK49 via USB and/or MIDI (attempting to auto-detect the relevant ports if it can), providing a point-and-click user interface via which all manner of preset-editing tasks can be accomplished, and allowing banks to be written to and read from files. It works well, and is definitely a useful addition to the bundle — although it's perhaps testament to the simplicity of the MPK49's design that I found myself editing from the device's front panel more often than not, as it just seemed easier.

A special 'Akai Edition' of Ableton Live Lite is also supplied with the MPK49. Or, rather, a small printed card is provided with a download URL for the software, and a serial number that can be entered after the software is installed. This done, a 'challenge-and-response' authorisation process follows, after which you're allowed to use the software. Live Lite is, unsurprisingly, a cut-down version of Ableton's popular Live sequencing application. (Live Lite users are offered an upgrade path to the full version.) The Akai edition includes 28 custom presets for Live's Impulse virtual drum machine, which are pleasant-sounding and useable.

The drum and percussion pads are one of the MPK49's key features and, like the keyboard, they offer both velocity and pressure (aftertouch) sensitivity. Unlike the keyboard, they also offer a choice of four different velocity curves to fine-tune their response. A threshold setting allows you to control the minimum force required to trigger a note-on. The pads are made from a kind of heavy-duty rubber-like material, and are just big enough to accommodate two fingertips side by side.

According to the manual, the pads are identical to those featured on Akai's MPC500 (the smallest and most portable member of the MPC family). In any case, they're comfortable and feel reassuringly durable. The pads have their own bank function, with four pad banks available (A, B, C and D), so that a total of 48 different sounds can be assigned, accessible in groups of 12. Pads can send either MIDI note numbers or Program Change messages. By default, they operate in 'momentary' mode (as you would use for triggering drum sounds), but can also be set to 'toggle' mode (note-on with the first hit, note-off with the next). Pad sensitivity can be adjusted to suit your playing style.

Several features combine to make hands-on improvisation of rhythm patterns, in particular, feel very easy. The first is a handy Tap Tempo button, alongside which a flashing LED indicates the unit's current tempo. (The MPK49 can generate its own internal tempo, or be sync'ed to an external source, such as a sequencing application.) 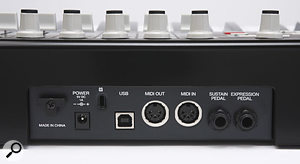 The Spartan, yet functional rear panel of the MPK49.Photo: Mike Cameron

Then there's the Note Repeat function, borrowed from the MPC family. This is simple, but remarkably effective. With Note Repeat activated, pressing and holding a pad causes the assigned sound to be triggered over and over again, at intervals determined by the 'time division' setting. Possible time division values are 1/4 (quarter notes), 1/4T (quarter-note triplets), 1/8, 1/8T, 1/16, 16T, 1/32 and 1/32T. On the face of it, Note Repeat might not seem that useful, but once you've played with it for a while it begins to seem invaluable. Simple drags and rolls are effortless: just punch in the desired time division and lean on the appropriate pad at the required moment. Many such fills would be impossible to play 'live' with your fingers, and Note Repeat is quicker, more intuitive and more fun than step-programming in a sequencer. Because the pads are pressure sensitive, some interesting effects can be produced by having Note Repeat triggering sound sources that allow parameters such as (for example) filter cutoff or stereo panning to be modulated by MIDI velocity. By varying how hard a pad is held down, you can create all sorts of sweeping and rolling effects. Note Repeat's behaviour can be fine-tuned in several ways. The 'gate' duration of each repeat can be adjusted, and a 'swing' parameter can adjusted over quite a wide range, with some nice, loose effects available. A built-in arpeggiator is another nice feature. Like Note Repeat, it works in conjunction with the time division settings, has editable 'gate' times and can have variable amounts of 'swing' applied. Six arpeggio types are available: Up (from the lowest to the highest note held); Down (the opposite of Up); Inclusive (from lowest to highest notes and back again, with lowest and highest notes retriggered when the arpeggio changes direction); Exclusive (like Inclusive, except the lowest and highest notes aren't retriggered); Random; and CHRD (which repeats the held notes as a chord). The arpeggio's range (in octaves) can also be adjusted.

Overall, the Akai MPK49 strikes a pretty happy balance, offering enough flexibility to be very useful without becoming over-complicated. The large panel and generously spaced controls make for a very comfortable controller, the arpeggiator is easy to use, and the combination of the MPC-style pads, the Note Repeat and swing functions is good fun — and occasionally inspiring. Add a quality keyboard, a fair selection of assignable knobs and sliders, and a user interface that's easy to learn, and you've got a very good all-rounder at a decent price.

There are a lot of USB keyboard controllers on the market right now, costing anywhere from £50 to £1000 or more. Novation's Remote LE and SL controllers offer broadly similar features to the MPK49 at a similar price. Korg's Kontrol 49, also in the same price band as the MPK, and featuring pads, knobs, faders and a 49-note keyboard, would also be worth a look. Finally, something like M-Audio's Axiom 49 might be an alternative for the more budget-conscious — if you can live without the features provided by the more expensive models.

As I've said, there's a lot to choose from in this marketplace at the moment, and time spent researching what's right for your needs will pay off.