AVI have a reputation for excellent hi-fi speakers, but with this system they've turned out a real studio gem. 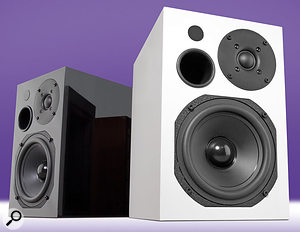 Few companies make products that successfully straddle both the hi-fi and professional studio markets, although when it comes to monitors the UK has more than its share, with names like ATC, PMC and AVI... perhaps having three initials for a name is part of the secret? AVI have a history of building exceedingly good amplifiers that rival esoteric products for a much more realistic price. They've produced powered monitors in the past (passive crossover designs with an integral amplifier pack), but their new two-way ADM9s are their first small active speakers.

Measuring 300 x 200 x 250mm, the ADM9s are compact, ported models in solidly-built but otherwise conventional cabinets. They use a six-inch woofer and a one-inch soft-dome tweeter. The long-excursion bass driver is powered by a 1.5-inch voice coil, with ventilation through the pole piece to the area beneath the spider, helping to cool the voice coil, and the well-damped, paper-composite cone is fitted with a soft dustcap. The driver is specified to operate well above the crossover frequency, as even with steep crossovers the drivers can remain audible for an octave or more either side of the crossover region. The soft-fabric dome tweeter is fitted with a phase-correcting front plate, and is designed for high power handling, with a frequency response extending beyond 30kHz.

The ADM9s have a very respectable overall frequency response, going from below 60Hz to in excess of 20kHz (-6dB), but for serious full-range studio monitoring they are best teamed with the ADM9-specific subwoofer. For maximum flexibility in both hi-fi (which I mean in the true sense of the word) and studio monitoring environments, the ADM9s offer a choice of two digital input options, as well as the more familiar analogue. To maintain optimum resolution, there is a remote control for the digitally-controlled analogue gain attenuator, which works in a series of 0.5dB steps to adjust the signal level after conversion. This is far preferable to using a digital attenuator, which would lose resolution as the gain was reduced. The level at power-off is even remembered the next time you power the speakers up.

The remote control can also be used to select between the analogue and digital inputs. There are two different digital options: for pro audio applications there's a version with a 24-bit (up to 96kHz) optical Toslink S/PDIF input, using the same Wolfson DAC/clock chips as the respected Benchmark converters; while those using a computer as a music server in a domestic environment can opt for the 16-bit (Burr Brown) USB version. If you prefer a hard-wired S/PDIF port you'll need to use a third-party optical-to-coaxial adaptor.

The left speaker houses the electronics for the dual-input preamplifier (one analogue input and one digital) and the digital converter. A single cable connects it to the other 'slave' speaker. AVI have opted for heavy-duty unbalanced phono analogue connections throughout (the hi-fi fraternity have a strong distrust of balanced circuitry) but providing they aren't plugged and unplugged too often, high-quality phono connectors can actually provide a more reliable metal-to-metal contact than jacks or XLRs.

I spoke with Martin Grindrod, who designed the ADM9s, to find out more about his approach. Many speaker designers use active circuitry to build in extra filtering in an attempt to further flatten out the response curve — in effect compensating for shortcomings in the driver or cabinet design — but this approach introduces phase errors that can diminish the stereo imaging and lead to a coloured sound. Martin believes these phase problems to be more audible than the small frequency-response humps and bumps that equalisation sets out to cure. So with the ADM9s he aimed to achieve a sensibly flat response without using any such drive-unit compensation or bass boost. He opted for a steep fourth-order crossover, with no additional filtering other than at the sub-bass end, and designed his own high-performance drivers (built for AVI by a specialist loudspeaker company), which are now being used in preference to the Vifa and Scanspeak drivers that AVI have used in the past.

Martin argues that a steep crossover is desirable, because all tweeters are audible well below the crossover point (just as woofers are audible above the crossover point), not just because of phase problems where their range overlaps with the woofer, but also because tweeters distort quite audibly at lower frequencies. Using an active crossover allows a steeper slope to be used, so less energy reaches the tweeter below the crossover frequency. Furthermore, the amplifiers no longer have to drive the more complex load of a typical passive crossover. Martin's design uses low-distortion, high-voltage amplifiers that offer generous amounts of headroom and a frequency response of 65Hz to 25kHz ±2dB and -6dB at about 55 to 60Hz.

The ADM9 includes a digital input: you have the choice of 16-bit USB, for direct connection to computers (such as a home media centre), but for professional studio work you'll want the 24-bit optical S/PIDF version shown here. He also claims that his amplifiers have some 20dB better distortion figures than their Class-D equivalents. In this design, the bass/mid amplifier is rated at the equivalent of 250W (500W max), while the soft-dome tweeter has its own 100W amplifier, so there's bags of headroom to accommodate short-duration peaks. The low frequency amplifier bandwidth is -3dB at 7 and 70Hz, while for the high frequency amplifier it is -3dB at 70Hz and 70kHz.

Martin pays just as much attention to important areas such as power supplies and D-A converter layout as he does to the speakers themselves. But there isn't any real novelty or departure from the norm in these designs — it is simply a case of adherence to sound engineering practice. The generous power supplies use good, old-fashioned transformers rather than switch-mode circuitry, but the circuit design and layout is up-to-the-minute, with extensive use of surface-mount components.

Active speakers tend to control the low end better than do passive designs, as the direct coupling of the amplifier to the speakers (rather than via a passive crossover) improves the damping factor. Sometimes this can be counter-productive in marketing terms, because it limits the tendency of the bass driver cone to continue moving once the signal has ended (limiting this movement can make the bass end seem less impressive — even though it is actually more accurate!). In a system such as this one, where the cabinet is correctly damped rather than designed to 'honk' at the same frequency as a kick drum, the initial perception of insufficient bass end may be even more pronounced, though the experienced listener will recognise that it actually sounds smoother and more natural than a 'hyped' design. The typical operating SPL (based on 100 hours' continuous operation, using RS426A Program Noise) is rated at 108dB at one metre, per pair of speakers, and this leaves a further 8dB in hand to accommodate instantaneous peaks. 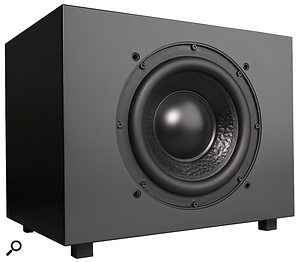 The ADM9s have reasonably good low-frequency extension, but better results can be obtained by teaming them with the optional subwoofer, which is designed specifically for use with the ADM9s.Most studio monitoring systems include a two-way crossover in the sub, to roll off the low end feeding the main speakers (as well as removing high frequencies from the sub) but AVI have discovered that for music applications, adding a sub to turn a two-way active system into a three-way active system doesn't really work very well, because the high crossover point (which is typically at 80 to 120Hz) places the crossover region at the lower end of the critical vocal range. In a properly-designed three-way system, the crossover region is more likely to be at 200 to 300 Hz, but this wouldn't work with a separate sub, because the crossover point needs to be kept low to prevent the sub being identified by the listener as a separate source of sound. Instead, AVI provide the sub with its own switchable high-cut filter, which might typically be set to 40 or 50Hz, so that it takes over where the main speakers naturally roll off. Although this doesn't increase the maximum SPL of the main speakers — as it does in some other systems — it does result in a smoother low end.

The sub comprises a single heavy-duty, front-facing, 10-inch driver, in a 35-litre sealed cabinet that measures just 340 x 430 x 360 mm. It is driven by a 220W power amplifier, based on AVI's existing V2 design. The connections and the adjustable low-pass Linkwitz-Riley filter switch are on the rear panel, where you'll find a number of switched frequency options that cover the 20 to 100 Hz range in 10Hz steps. When the sub crossover is set to 60Hz, the low-frequency limit (-6dB) is a little below 30Hz. There's a variable Line In level control and a phase switch. The sub takes its feed from two phono connectors on the left-hand speaker, but there's an extra set of inputs with their own level control for connecting the sub as an LFE speaker in a home theatre system. A rotary switch is used to select the source — LFE, Line, or a mix of the two, in both normal and phase-invert modes.

The AVI ADM9s come across as extremely neutral-sounding, but they probably lack the low-end extension for serious monitoring unless you add the sub — which fills out those low octaves in a very natural and seamless way, right down to about 30Hz. Playing back some well-recorded acoustic instruments shows how accurate these speakers really are: everything seems properly focused, and the stereo imaging is astonishingly good. Centrally panned sounds are firmly nailed to an imaginary point between the speakers, while stereo and other panned sounds spread out clearly in a wide panorama that seems wider than the physical spacing of the speakers themselves. Those who are used to less sophisticated monitors may at first feel that the ADM9 system lacks punch at the low end or assertiveness at the top end, but that's only because some studio monitors tend to hype these areas: the ADM9s seem to tell it like it is. Once you've worked with them for a little while, you come to appreciate their smoothness and honesty, whether for mixing pop music, acoustic ensembles or even classical music.

As a compact, high-quality monitoring system, the AVI ADM9s used with the sub turn in a very impressive performance at a good price. The system is easy to set up and includes really first-rate converters for anyone who has a spare S/PDIF output to feed them. The remote analogue volume control (which works on both the analogue and digital inputs) is a real bonus if you don't have a separate monitor controller. Available in plain black or a choice of real wood veneers, these speakers fit in well both in the studio and home theatre systems and bring genuinely high fidelity to studio monitoring.

If you are considering buying the ADM9s with their dedicated subwoofer, you might also want to audition competing models such as the ATC SCM10A2, the PMC TB2As, Digidesign's RM1 or RM2, and the Klein & Hummel O110D.

The ADM9s used with the matching sub provide an excellent full-range monitoring system accurate enough to mix any type of music.