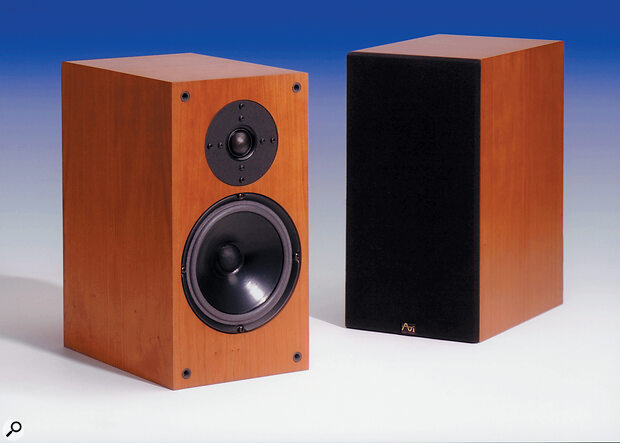 Paul White tests AVI's updated 'Red Spot' version of their Bigga‑Tron monitors and finds out if this offers a worthwhile improvement.

Back in SOS March 1999, I reviewed a British‑built passive monitor from AVI called the Bigga‑Tron. Despite its tragically unhip name, the Bigga‑Tron turned out to be a supremely nice‑sounding, accurate two‑way speaker and it had just the right amount of bass extension to function as a serious mix monitor for small to medium‑sized project studios. The reason AVI gear is always so well‑designed is that behind the company is an obsessive and highly talented engineer called Martin Grindrod, who can't help but fiddle with things to try to improve them. This even applies to products that are already out on the market, so when Martin came up with an improved crossover design for the Bigga‑Tron, AVI replaced the original model with the improved version and also offered optional updates to existing owners. 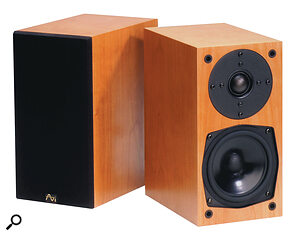 For those familiar with the earlier version of the Bigga‑Tron, the Red Spot version is outwardly identical to its predecessor — a two‑way, passive speaker measuring 370 x 195 x 295mm and featuring a fully enclosed infinite baffle design rather than the more common ported cabinet approach. The cabinet is built from 18mm MDF, lined with 6mm bitumastic damping pads and further damped with a precisely calculated mass of acoustic wadding. The review pair came in natural cherry wood, though black ash is also available, and a lightweight grille is provided for domestic users, even though most studio owners will probably remove this straight away.

The tweeter is a 28mm soft dome unit by Scanspeak, which alone costs more than most manufacturers budget for both drivers. A 6.5‑inch Vifa driver covers the bass and mid‑range and has a curvilinear doped paper cone driven by a 25mm voice coil. Originally the crossover was set at around 3.5kHz, but Martin re‑appraised the crossover's impedance matching equalisation network and reduced the crossover frequency to 2.5kHz. At the same time, the tweeter level has been rebalanced, which has resulted in greater bass extension, though slightly at the expense of power handling. The maximum SPL is now around 106dB at one metre, though this is still more than adequately loud for nearfield use. Furthermore, the speakers are relatively efficient, so you can play them loud even from a modestly powered amplifier. In a domestic environment, an amplifier of 30 to 50 Watts may well be fine, but for studio applications 100 to 150 Watts per channel is recommended.

The combination of the new 13‑element crossover and the drivers presents a nominal 8Ω load to the amplifier, and this never falls below 6Ω. A further benefit of the re‑engineered crossover design is that the phase accuracy at the crossover point has been improved from 6° to better than 1°. A single pair of terminals on the rear panel connects the crossover to the outside world and gaskets are used throughout to keep the cabinets airtight.

The frequency response is an improved 80Hz to 30kHz ±2dB and is only 6dB down at around 50Hz. The Bigga‑Tron isn't magnetically screened, because the choice of drivers doesn't make that practical. If you put them directly alongside a computer monitor, some colour fringing is evident, but this may disappear once the monitor is switched off and powered up again, due to the action of the automatic degaussing circuit which is often incorporated in modern monitors.

I tested the Bigga‑Tron Red Spots using my 100W‑per‑channel AVI integrated hi‑fi amplifier and an assortment of familiar CDs. A characteristic of the original Bigga‑Tron was its ability to reproduce human voices with uncanny accuracy, something that the Bigga‑Tron Red Spot does equally well, if not a touch better. They have a very clean, open sound and convey detail well, without the harshness present in so many fashionable but inexpertly designed monitors. If I had to make a comparison, I'd say the only passive speakers I've heard that produce similar accuracy and transparency are from high‑end companies such as PMC and ATC.

The bass end of the Bigga‑Trons has always been well‑controlled, but now it seems somehow more solid and confident, while the high‑end detail and stereo imaging are difficult to fault. Some users may still perceive less apparent bass than from an equivalent ported monitor, but that's because most ported designs reinforce frequencies around 80Hz — corresponding to kick drums and bass guitar — but fall away very rapidly below that. A sealed design starts to roll off at a slightly higher frequency but tends to do so rather more gently, which, in reality, enables it to deliver more true low bass. Another factor contributing to perceived bass loudness is distortion. The more distorted a monitor, the louder is sounds, so a cheap monitor might deliver an apparently powerful bass performance that isn't actually there in your material — not what you really need from a studio monitor!

These revised Bigga‑Trons are a worthwhile improvement on an already creditable original design. The main improvement seems to be at the bass end, which now seems to have more weight as well as a little more extension. The presentation of high mid‑range frequencies is extraordinarily open and revealing, while the stereo imaging is also rather better than average. While not the loudest monitors I've used, they're more than loud enough for safe nearfield monitoring and they remain clean up to surprisingly high levels without turning rough or boxy. They also present a relatively easy load to the power amplifier, so performance isn't likely to be compromised by the speaker making unreasonable demands on the amplifier.

Whilst you can buy a small active monitor for around the same price as the Bigga‑Tron Red Spots, I believe that for anyone working in an environment where they need really accurate, detailed monitoring that tells it like it really is, these speakers have something a little special to offer. This is particularly true in situations where the human voice and acoustic instruments play a large part in the music. If you get the chance, take some time to listen to a pair of these speakers and I'm sure you'll appreciate the difference.

The Bigga‑Tron is not the only monitor in AVI's range to have been upgraded — a similar upgrade has also been applied to its smaller cousin, the NuNeutron, now called the Neutron III. Based on a two‑way closed‑cabinet design, the Neutron III measures only 26.5cm tall and uses a 13cm bass/mid driver in combination with a Scanspeak 28mm tweeter. Again, the upgrade is in the crossover, which has been redesigned to drop the crossover point to 2.8kHz from 3.6kHz and to improve the impedance matching equalisation of the original.

The improvement in bass end and mid‑range smoothness was quite noticeable, even though I'd always liked the sound of the originals. The frequency response is now 90Hz to 30kHz, but the response is only 6dB down at around 60Hz, which makes the bass sound a lot more extended than you'd expect from such small monitors. Like the Bigga‑Trons, they are not magnetically shielded. The Neutron III is ideally suited to broadcast or for use in edit suites and smaller studios where accurate monitoring is required in a compact environment.

Though not cheap, the Bigga‑Tron Red Spot is significantly less expensive than the high‑end speakers with which it competes, and its performance is hard to better in its class.