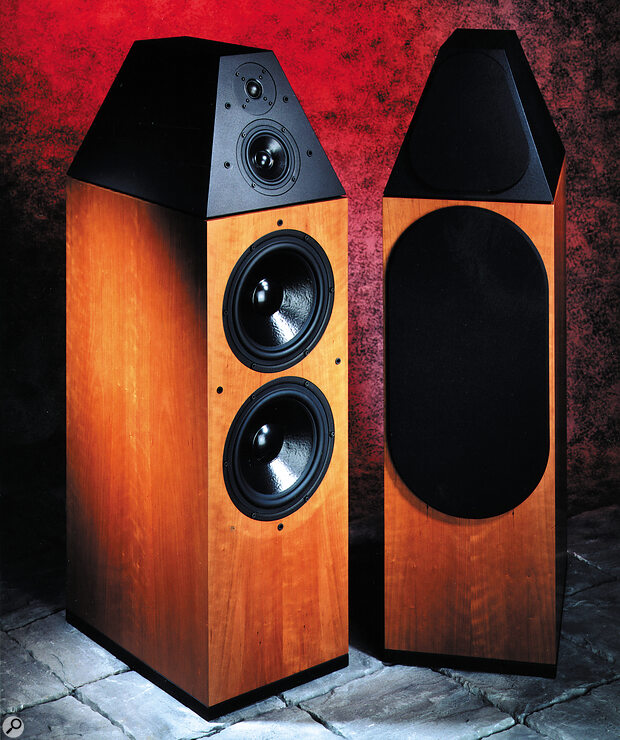 As the car ad says, "size matters!" and AVI have proved the point with their biggest loudspeakers yet, the Gravitrons. AVI say they're built 'without compromise' and 'regardless of cost'. Hugh Robjohns will see about that...

AVI's experience in designing superb hi‑fi equipment, including power amplifiers, CD players, tuners and preamplifiers, has been instrumental in their developing high‑quality domestic loudspeakers which are becoming common in professional and semi‑pro control rooms. Apparently, knowing how to build an amplifier to extract the best from a loudspeaker also helps when designing loudspeakers to present the most audio information from an amplifier! Consequently, AVI produce loudspeakers which present a relatively easy load, free from the common amplifier‑stressing impedance dips and huge phase shifts generated by poor crossover designs.

The development of AVI's loudspeakers, such as the Neutrons, NuNeutrons and the Biggatrons (reviewed in SOS May '96, June '98 and March '99 respectively), has also provided a great deal of experience which has been put to good use in the Gravitrons. As the flagship model, the Gravitrons had to offer the most transparent, accurate and believable sound stage possible, across the widest feasible frequency range. With their pedigree, it is no surprise that AVI have managed exactly that, resulting in one of the most impressive loudspeakers I have yet heard, at any price.

Perhaps the most unusual aspect of the Gravitrons is the complete absence of anything quirky! The Gravitrons employ nothing more than carefully selected, properly engineered components with predictable and consistent characteristics. Even the impressive synergy of cabinet, crossover and drive units has been arrived at by using traditional, thoroughly proven, and competently applied design techniques, which I find very comforting in this sometimes overly technophilic world!

Physically, each of the Gravitron loudspeakers consists of two separate cabinets — a floor‑standing bass enclosure and a pyramidal mid and high box, the latter located in a recessed well on top of the LF cabinet. The overall height of the complete system is 1.2 metres, with a depth of 0.54m and a main baffle width of 0.32m. We are talking BIG here — you will need the services of a small, housetrained, Indian elephant to install the Gravitrons, as they weigh around 60kg each.

Although the height of the bass enclosure puts the mid/top section rather high for typical sofa‑based domestic listening, in the context of a mastering room, say, where auditioning is more likely to take place sat behind a console with office‑style chairs, they are exactly the right height. However, AVI can supply an optional frame allowing the bass cabinet to be turned on its side with the mid/top enclosure sitting above it — a solution which offers useful flexibility in awkward installations.

The bass cabinet is a huge, totally sealed rectangular box constructed from 25mm MDF, with a total volume of 120 litres. The cabinet is a true 'infinite baffle' design (ie. completely sealed) which flies in the face of the prevailing trend in big monitors, most of which employ variations

of ported cabinets. However, AVI argue that the IB approach provides a gentle, smoother low‑frequency rolloff and sounds more natural than the 'bass bolstering' of ported speakers,

yet still provides a strong output at 20Hz — the quoted ‑6dB point. AVI also suggest that the Gravitrons work better in smaller rooms than large‑ported designs which, they claim, are

more likely to excite LF room modes. This may be true, but bear in mind that in Gravitrons terms a 'small room' would be, perhaps, 8 by 7 metres (24 by 21 feet, say)!

The LF drive units are a pair of 10‑inch Vifa loudspeakers. Part of the reason 10‑inch units were chosen over larger LF drivers was in order to keep the baffle width as narrow as possible, as this improves the dispersion of the mid‑band and HF drivers and plays a crucial role in stereo imaging. The usual drawback with small drive units, though, is their limited power‑handling capability, but these particular Vifa units have an astonishing rating of 600 Watts each! Consequently, these speakers can generate a continuous sound pressure level of 110dB whilst still having the dynamic linearity to produce instantaneous peaks 10dB higher!

The crossovers for all three bands are housed in a separate section at the bottom of the bass cabinet, as far away from the magnetic fields of the drive units as possible. The filters for each band are constructed on their own circuit boards and oriented to minimise mutual interaction. Top‑quality polypropylene capacitors and ferrite‑cored inductors are used and the two crossover points are roughly 300Hz and 3kHz. Gentle second‑order (12dB/octave) slopes can be used because all four drive units exhibit substantially flat amplitude responses well beyond their operating pass bands and, as a result, the phase accuracy of the entire system is remarkably good — better even than some active systems! All three crossovers are accessible independently from three pairs of binding posts on the rear panel of the bass enclosure, permitting bi or tri‑wiring if required.

The mid and treble drivers are housed in a physically separate flat‑topped 'pyramid' fitting snugly into a well at the top of the bass cabinet. The internal space is filled with acoustic wadding and a short umbilical cable with gold‑plated Speakon connectors links the two cabinets together, carrying the mid and treble signals from the crossovers. The pyramid shape offers several advantages over conventional cabinet designs: the non‑parallel sides discourage internal standing waves and resonances, and the progressive narrowing allows the best‑possible dispersion from the two drive units, as well as providing time‑alignment of the acoustic sources of the treble and mid driver with the two bass loudspeakers.

The tweeter is the same top‑of‑the‑range Scanspeak unit which AVI use in all their loudspeaker models. The mid‑range driver is a 5‑inch Vifa unit with a 32mm voice coil driving a soft‑doped paper cone, and it also exhibits a substantial power‑handling capability.

Listening to the Gravitrons was a sublime experience. The scale, depth and sheer realism of the sound stage was nothing short of stunning and, although I have had the opportunity to listen to a great many loudspeaker systems costing as much (and far more), these are undoubtedly amongst the very best monitors I have ever heard. The bottom end is powerful, tuneful and surprisingly free of obvious response lumps. Bass drums have an accuracy and immediacy which few passive speakers can emulate — the thwack and the boom coming from the same point in time and space, as opposed to the separated, smeared offering of many loudspeakers. Mid‑range clarity and naturalness was equally superb, voices having a three‑dimensional quality, hanging solidly in space, and reverberant

recording rooms stretched out believably around the instruments. Every detail of every mix was laid out with complete lucidity, yet the Gravitrons were never tiring to listen to — the top end being precise but not harsh in any way. The tonal balance also remained reasonably constant across a wide range of listening levels, the bass falling away rapidly only when the volume was turned way down.

Already very impressed, I was even more amazed to discover that the gargantuan sound stage was being created by a pair of AVI's very modest‑looking 150 Watt mono‑block amplifiers. The dynamic range portrayed by the Gravitrons, even with this relatively limited amplification, is enormous and never seemed to show any signs of running out of steam, with incredibly powerful mid‑range and a tighter, more dynamic bass end than usual — a real benefit of the IB approach! With the volume and transient capabilities displayed by the Gravitrons I had been expecting some three‑ or four‑hundred‑Watt monster amps but, although these AVI amplifiers are very impressive, the Gravitrons actually present an easy 6 load with 88dB/W at 1 metre sensitivity. The crossover design also ensures that the phase angle never exceeds 30 degrees and so the amplifier is never stressed by reactive loading.

The obvious main competition for the Gravitrons is probably the B&W 801 Nautilus — a very popular professional reference monitor, especially in classical music circles. Other similarly priced monitors include PMC's MB1 (using Volt drivers with a soft‑dome mid‑range, and a transmission line cabinet), and ATC's SCM100A (which is more expensive but includes amplification). According to AVI, who have performed direct comparisons with the B&W 801, the Gravitrons exhibit a flatter frequency response, particularly across the mid and high frequency regions (+/‑ 1.5dB from 80Hz to 30kHz), and its phase linearity is also apparently better. I can't give a personal opinion on that, but I have spent a lot of time working on SCM100As and although I could not compare them directly with the Gravitrons, I certainly gained the impression that the latter were in a higher league — good though the ATCs obviously are. I am also a big fan of the approach taken by the Professional Monitor Company (PMC), but it has to be said that for all the advantages of transmission line loading, an infinite baffle box does sound more natural and provides far better integration of deep bass with the mid‑ range transients.

The Gravitrons are probably not the ideal monitor for a typically small project studio, but in a decent‑sized room where the speakers can be sited away from the rear and side walls they are, without doubt, exceptionally good. Although initially appearing expensive, I would suggest that in relative terms they actually represent real value for money when compared with systems offering similar performance.

AVI's publicity claims that the "Gravitrons are as good as it is possible to buy". This may be a little hyped... but only a little!