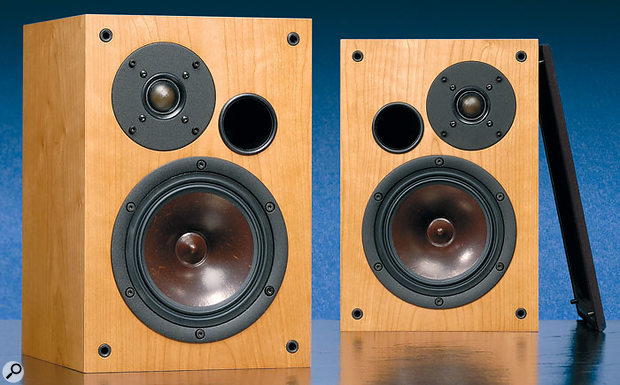 These high-spec passive monitors use well-established engineering principles to achieve a smooth and revealing sound.

AVI have established a reputation for fastidious amplifier and speaker design, largely because their designer Martin Grindrod prefers to combine established engineering principles with the best possible components rather than relying on gimmicks or so-called revolutionary design concepts. Because of this attention to detail, AVI speakers aren't exactly cheap, but compared with their peers they still offer remarkably good value.

AVI's passive Pro Nine Plus loudspeakers, which are an evolution of the company's original Pro Nine model, are designed as high-performance, two-way compact monitors and need to be teamed with a good-quality amplifier, such as AVI's 200W integrated amplifier, to give the best results. They are intended for stand mounting but can be wall or shelf mounted when there is no other choice. As with all such monitors, the sweet spot is widest when the speakers are mounted vertically, but the asymmetrical geometry of the baffle allows these speakers to be used on their sides with very little compromise.

Whereas most small monitors use drivers that cost only a few dollars each, the Pro Nine Plus combines a high-end Scanspeak 28mm soft-dome tweeter with a highly specified Vifa 6.5-inch cone driver. Martin apparently spent a long time auditioning drive units to find a pair that would work together as well as these clearly do. The woofer, which has a one-inch voice coil, features a curvilinear cone made from doped wood pulp, a material that combines stiffness with good self damping. The crossover is AVI's own 14-element, phase-correct design resulting in speakers that are both sensitive and very easy to drive. With a maximum SPL of 111dB and a frequency response flat within ±2dB from 90Hz to 27kHz, the design is well suited both to discerning listening and studio monitoring. They don't seem to suffer from power compression in the same way as lesser designs and so retain great integrity, even when driven hard.

Because of the honest way in which the frequency response is specified, the bass end is actually a lot more solid sounding than the paper numbers might lead you to believe. With a sensitivity of 88.7dB/W/m, the speakers can be driven from an amplifier with as little as 50W per channel, with a maximum recommended amplifier power of 300W per channel. My own view is that a good amplifier of between 100W and 200W per channel would be ideal for most applications.

AVI also build their speakers into beautiful cabinets, and the Pro Nine Plus is no exception. Measuring 340 X 230 X 255mm, the 12 litre cabinets, which are front ported, are built from heavy 18mm MDF and veneered with real cherry wood or black ash, though custom finishes are available to special order. As the cabinets are relatively small, no internal bracing is required, but damping panels are affixed to some of the inner surfaces of the box and a natural wool damping material is used to completely fill the internal space. The drivers are mounted into machined recesses in the baffle using cap-head screws, and the bass/mid-range driver also sits on a very effective airtight gasket. A single pair of terminals is used to connect the speakers, as the designers aren't really sold on the benefits of bi-wiring. There's even a mounting recommendation that the speakers be placed on pads of Blu-Tac rather than on fancy (and expensive) spikes.

I tested these speakers with one of AVI's original integrated amplifiers, which is rated at around 100W per channel and so is perhaps not quite as well suited as AVI's new and more powerful model. Nevertheless, it proved more than adequate. While most of the hi-fi mag reviews have been very favourable, there have been comments that the speakers tend to over-project vocals very slightly. In the studio world where monitors tend to be voiced more aggressively than the hi-fi fraternity would like, this attribute would probably not even be noticed, or if it was, it would probably be considered favourable.

Overall, the sound is reassuringly smooth and open with a good degree of depth, excellent stereo imaging, and negligible audible coloration due to the cabinet, even at high listening levels. I already have a pair of AVI's very nice, though controversially named, Biggatrons, but the Pro Nine Plus monitors sound noticeably tighter and generally more believable, especially at the low end. They are designed to be used fairly close to a wall rather than standing in the middle of the floor, so they should suit the majority of small studio rooms, and, unlike many speakers designed by hi-fi companies, the headroom and sound output (111dBSPL maximum) are suitable for serious monitoring — provided that you don't play dance mixes at club levels.

Because the AVI Pro Nine Plus isn't a 'brute force' monitor, it is probably not the best choice for mixing dance music, but powered from a decent amplifier it makes an excellent monitor for mixing acoustic projects and jazz or pop music that has high production values. Furthermore, because of its hi-fi provenance, it should produce mixes that translate better to home hi-fi than some of the bigger, more aggressively voiced studio monitors.

AVI's monitors have always had a lot of finesse and so are best suited to engineers who like to really hear into their mixes rather than those who use their monitors just to set up a 'broad strokes' tonal balance. This model is one of the best speakers of its size I've heard, and I think it's AVI's best mid-sized speaker so far. It's not a cheap option, especially when you have to budget for a good-quality amplifier (and stands) as well, but it is capable of superb results. No monitor is perfect — existing technology just doesn't allow for it — but this one is extremely good and is capable of outclassing some competitors costing significantly more. As suggested earlier, if you're doing dance music, there are probably more effective ways to spend your money, but if you do many projects involving acoustic instruments and voices, pop music, blues or jazz, they're very well suited to the task.

Where you need the accuracy to finish mixes to a high standard, particularly in the area of acoustic music, these speakers are very hard to beat in their UK price range. However, if you're doing mainly dance music, then there are cheaper alternatives that will probably serve you adequately well.