This interesting monitor system uses the natural roll‑off of the satellite speakers to provide the crossover with the subwoofer. 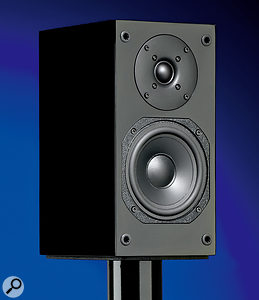 AVI are one of those small UK speaker companies who, like ATC and PMC, straddle the line between consumer and pro audio by building speakers that can fulfil multiple roles. Having already established a reputation for producing both speakers and amplifiers to a very high standard, it made perfect sense for them to develop their own three‑way system suitable for home entertainment or studio monitoring.

To make it aesthetically appealing to domestic users, the company's Neutron system is reasonably compact, and is finished in flawless black piano‑gloss with removable fabric grilles. Look inside, though, and you'll find some seriously good (and in the case of the sub, heavy!) drive units, meticulously designed crossovers and well-engineered amplifiers.

AVI's drivers are now made by Sinar Baja in Indonesia, major world players in the loudspeaker business. They apparently acquired some personnel from the Vifa/Scanspeak/Peerless empire that had been the previous source for AVI drivers, and designer Martin Grindrod rates their drivers very highly, both on performance and consistency.

Conventional wisdom has it that there should be an electronic crossover between the tops and the sub, but Grindrod had other ideas when he designed the Neutron system. The sub's internal amp is fed from a low‑pass filter, as you'd expect), but the tops are fed a full‑range signal, with their natural low-frequency roll‑off taking on the function of the usual electronic high‑pass filter. This does limit the maximum SPL slightly, as low‑frequency energy is still being sent to the satellites, but the benefit is that the sub integrates extremely naturally.

Handling the mids and highs in the 2.1 system I had in for review were a pair of AVI's Neutron Fives, the latest addition to the Neutron line. As the name suggests, the Neutron Five utilises a five-inch bass/mid driver, fitted with a curvilinear cone and driven by a 25mm voice coil. A 25mm soft‑dome, doped‑silk‑composite tweeter handles the highs. The two drivers cross over at 3.4kHz via a passive, second-order Linkwitz Riley filter, built on a heavy circuit board with thick copper tracks, and using impressively large inductors and premium‑grade metalised polypropylene capacitors. All this fits into a rear‑ported cabinet built from 12mm MDF and measuring just 310 x 160 x 200mm. The inputs are on heavy brass binding posts and have centre sockets to accept banana plugs. 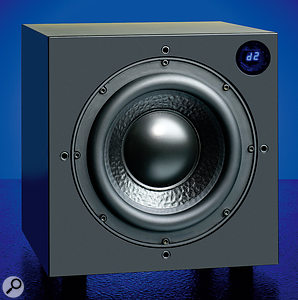 The subwoofer is more complex than it looks!

Because the design is optimised for accuracy rather than loudness, the speaker efficiency is quoted as a modest 87.5dB (using the standard measurement of 1W at one metre), which though still quite respectable, means a reasonably powerful amplifier is needed to drive it effectively. The necessary amps reside in the sub, with 100W available for each of the two Neutrons, so that's not a problem.

While some companies keep their frequency-response figures a little vague, AVI are careful to present them correctly: the Neutron Fives measure flat ±2dB from 120Hz to 23kHz and are ‑6dB at 65Hz. This means that even without the sub the Neutrons provide an adequate low end for listening at lower SPLs in smaller rooms. Speaking of SPLs, my listening tests confirmed that whatever the maximum SPL might be on paper, it is more than enough for serious monitoring when the tops are set up as nearfield monitors.

The Neutron Five sub looks pretty compact at 340 x 340 x 340mm, but as soon as you try to lift its not inconsiderable 26kg, you realise there's something pretty serious going on in there! The driver is a massively built 10‑inch unit, and then there's the weight of three 100W analogue power amplifiers and their power supplies. The low-end response falls away gradually, but there's useful output down as far as 30Hz, which is impressive for such a compact unit.

While we are used to speakers with balanced XLR inputs, there are sectors of the hi‑fi industry that believe all balancing circuits compromise the audio quality to some extent, and that at the short cable lengths involved, balancing offers no practical advantages. AVI have gone with gold‑plated phono connectors for the analogue inputs (500mV sensitivity), as the humble phono provides a large area of metal‑to‑metal contact. Phonos are not designed to be plugged in and out at regular intervals — but once the speakers are installed, they're unlikely to be disturbed all that often.

In addition to the two analogue inputs for the 2.1 system, the four digital inputs of the subwoofer allow you to select from different monitoring sources with the remote control.There's more to the sub than just speaker and power amps, as the circular display window on the top right of the front baffle suggests. There are also digital inputs, and the sub has an inbuilt, very low-jitter D-A converter/receiver based on Wolfson chips, which are used in many high‑end, stand‑alone converters and are capable of extremely good results. The included infra-red remote control provides access to a number of inbuilt features that are useful both to the home-entertainment customer and to the studio owner (there are no physical controls on the speakers at all). The input to the converter can be chosen from one of four different optical ports, all capable of working at up to 24-bit, 96 kHz. There's also a USB input for direct connection to a music server, which can operate at 16‑bit resolution. The remote control has dedicated buttons for selecting each of these inputs.

To avoid compromising the sound quality by using voltage-controlled amplifiers (VCAs), the remote volume control employs a stepped attenuator, adjusting the level in 0.5dB steps over a 100dB range. There's also a choice of 40Hz or 80Hz low‑pass filtering for the sub crossover and a sub mute switch. Parameter values are shown while adjustments are being made, after which time the display reverts to showing which input is currently selected, this being remembered when the system is powered down. AVI tell me that the sub is also available separately but is only designed for use with AVI's own two‑way speakers, so anyone who already owns a set of Neutrons (or other AVI compact two‑way passive speakers) could upgrade by adding this sub.

I already own a set of AVI speakers that I use for general music listening in my lounge, and although the Neutron Fives are somewhat smaller and less costly, they have a surprisingly similar family sound. Even without the subwoofer, they reproduce enough low end for low to medium‑level domestic listening. In comparison with the vast majority of studio monitors, AVI speakers have a decidedly neutral tone, rather than the often artificially bright top-end and peaked up 80Hz bass exhibited by many monitor brands. This smoothness of tone makes them very easy to listen to, but detail still translates well. Those used to more brash monitors may take a while to get used to the sound, but when you're working in front of a pair of speakers for hours on end, the lack of sonic aggression achieved through low distortion is appreciated!

Adding the sub fills in the lower octave in a surprisingly unobtrusive way, adding the necessary depth without colouring the sound. My own preference was to use the 40Hz filter setting, as this seemed to balance well with the natural roll‑off of the Neutron Five satellites. You can flip to the 80Hz setting for more impressive earthquakes if you happen to work in the same room as you watch your TV, and of course those selectable inputs means you can move from music computer to TV optical output to CD player (with optical or coaxial S/PDIF), without having to re‑patch.

Given the modest price, and the performance of which this system is capable, it has to be considered good value. The switchable digital inputs are a bonus for those who need them, and the high-gloss piano finish should look in keeping anywhere. The neutral sound may take some users by surprise, especially if they're used to monitoring on US-designed speakers with their typical 'forward' voicing, but they're comfortable to work with, more than adequately revealing of detail, and in even a modestly treated room, the stereo imaging is excellent. What's more, mixes that sound good on this system translate well to other playback systems. At the price they have to come highly recommended.

This AVI system leans towards the tonal neutrality favoured by those engineering acoustic and classical music as well as pop, which makes it difficult to name a direct competitor at this price point. Models by companies with a similar philosophy towards tonal accuracy, such as PMC and ATC, tend to be rather more costly. If you're looking for a system of equivalent price, then check out Blue Sky's 2.1 systems or, at a slightly higher price point, some of the smaller Genelecs teamed with a sub.

This little system seems well suited to both the consumer and small‑studio marketplaces, and will be particularly attractive where one system needs to serve both purposes.