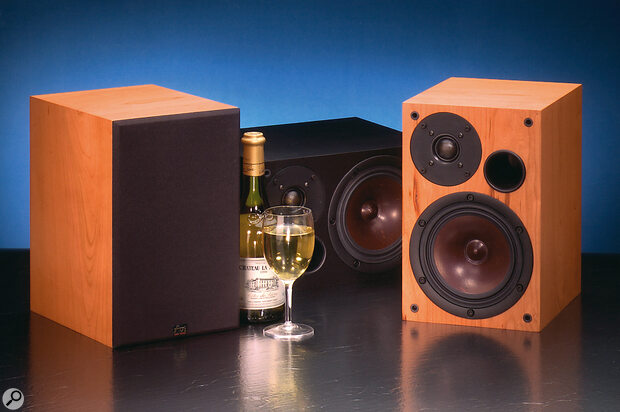 In addition to their prestigious range of hi‑fi products, AVI also make a number of loudspeaker and amplifier products that cross over into the professional and project studio markets, the latest of which is their new Pro Nine nearfield monitor. The Pro Nine measures just 310 x 195 x 250mm yet its frequency response is only 6dB down at 55Hz and remains flat within ±2dB up to 27kHz. With an 89.5dB sensitivity (1W at one metre), the speaker is remarkably efficient and can produce a maximum SPL of 111dB per speaker. However, its still needs an amplifier of between 100W and 150W per channel to make sure that transients are handled cleanly.

The Pro Nine uses a ported two‑way design in a box made from 15mm‑thick MDF, available in textured black or cherry‑wood veneer finishes, with a removable cosmetic grill fitted to the front panel. The cabinet is completely filled with a precise mass of long‑fibre wool for damping and tuning, and the drivers mount in recesses machined into the baffle. Two conventionally colour‑coded binding posts connect the speaker to its cable (the designers have deliberately omitted a bi‑wiring option).

The Pro Nine is the first commercial loudspeaker to feature a new and specialised 6.5‑inch bass/mid unit from the Scandinavian company Vifa. This beautifully made, and comparatively expensive, little speaker features a very long, 25mm‑diameter voice coil suspended in a symmetrical spider assembly fixed to a separate platform some distance away from the magnet, allowing plenty of ventilation to the coil assembly. Given the physical size of the driver, the magnetic assembly is quite substantial, with a central vent passing through the axis of the magnet.

A newly profiled, low‑resonance double‑roll suspension system supports the edges of the cone while the cone material itself is unusual in that it is made from randomly sized wood pulp fibres coated with a brown plasticised damping material. The curvilinear diaphragm's mass and stiffness are, according to Vifa, balanced to produce minimum distortion over the driver's operating range. Vifa also claim this is the best drive unit of its size that they have ever built, though many of its features are refinements of established principles used in other classic drivers, rather than anything radically new.

Partnering the Vifa bass/mid driver is the same high‑end, ferrofluid‑cooled Scanspeak tweeter used in all the other AVI monitors, another quite expensive component. This is a one‑inch, soft‑dome unit mounted off the centre line of the cabinet in such a way that the driver alignment is similar whether the speaker is stood on end or laid on its side — this may be an important factor for those users who like side‑mounted monitors, as the stereo imaging won't suffer in the same way as it would for systems with symmetrically mounted drivers. The drivers are not magnetically shielded, as it isn't practical to shield magnetic assemblies of this size without compromising the driver performance. However, unless the speakers are almost physically touching a TV or computer screen, the degaussing circuits found on most monitors should be able sort out any problems.

During the development of the Pro Nine, AVI made a number of discoveries that were fed back into their existing monitor line, culminating in enhanced crossovers throughout their range. The new design achieves an improvement in the behaviour of the speaker at and around the crossover frequency, as the contributions from the tweeter and bass/mid units remain in phase with each other in the region where they overlap. The crossover operates at around 2.5kHz and has a second‑order, Linkwitz Riley response with a claimed phase accuracy of better than one degree. As with other AVI monitors, the crossover is hand‑built using premium‑grade components on a heavy glass‑fibre PCB.

Apparently there are plans to introduce an active version of the Pro Nine later in the year, where the amp packs and electronic crossover are mounted outside the enclosure, on the rear panel. Owners of the passive Pro Nine should be able to have their speakers upgraded relatively easily when the amp packs become available.

AVI's general approach with monitors has always been to put money into high‑quality drive units and crossovers, rather than into fancy boxes, and to apply solid engineering principles to the system design in as scientific a way as possible. As such, it was no surprise that the Pro Nines delivered a very tight, solid performance when used with a suitable, high‑quality amplifier. Particularly noticeable was the level of detail that the monitors revealed, which seemingly extended well back into the mix, as well as from left to right. Voices were reproduced with a very open, natural character while the bass end handled kick drums confidently with no evident time smearing.

Some small monitors might seem more bassy, but this will often be because over‑zealous cabinet tuning causes bass notes to ring on, making them appear misleadingly more powerful. This AVI design uses a fairly low‑Q tuning system so that bass overhang is very tightly controlled, yet even then the speakers don't sound unduly bass‑light unless driven from a woefully inadequate amplifier — certainly the increase in bass extension compared with the smaller AVI Biggatrons is quite noticeable. Obviously, no physically compact speaker can equal the bass extension of some of the larger studio monitors, but in most project studio control rooms I'd say that the Pro Nines will get the balance just about right.

Although you can buy cheaper monitors that sound impressive, I feel it's worth paying the extra for this degree of accuracy, especially if you're working with acoustic instruments, voices or final mixes.