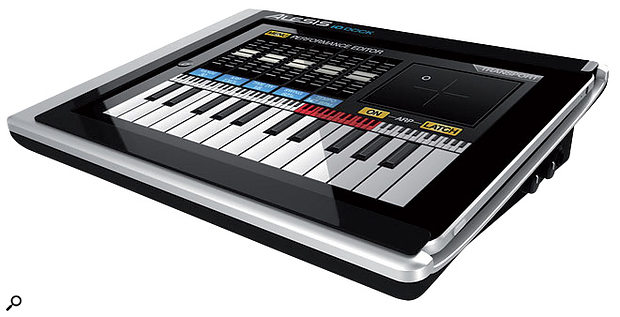 As the number of iPad apps for music creation increases, it's inevitable that the number of interfaces will too. The iO Dock from Alesis is designed specifically with the iPad in mind, and the tablet slots into the device easily enough. A plastic adaptor is also included to let the iPad 2 work with the iO Dock.

Power comes from a 6V DC adaptor only, so you'll either need to be near a wall socket when you use it or buy an external DC battery pack (of the kind often used by video cameramen to power lights and other accessories). Although it isn't the most portable device, due to the power requirements, it does (unlike many iOS interfaces) charge your iPad while it's connected, which is very handy indeed.

I assume that the iO Dock's video output is designed to allow images to run at the same time as sound while performing live. During my review time, I didn't find an app that would let me do this, although video playback using YouTube and Safari worked. Do remember that this kind of analogue RCA composite video connection can't carry HD resolutions, so your video output will be less impressive than the display on your beloved pad.

The rear panel of the iO Dock hosts most of the inputs and outputs, as well as controls for phantom power and direct monitoring.

For connecting instruments, there's a pair of 'combi'-style connectors that can take XLR or jack inputs, the second of which can be switched to high-impedance mode for direct connection of a guitar or bass. Phantom power is switched globally rather than per input, while another switch allows the balanced-jack monitoring outputs to be switched to direct monitoring of the inputs. MIDI input and output is provided both by standard DIN jacks and a MIDI USB port, while a footswitch socket is also available for additional control in compatible apps.

The built-in headphone amp is slightly 'darker' in tone than most, and is specified for headphones that are relatively difficult to drive. Using a pair of very sensitive IEMs, the volume was extremely loud once the knob was rotated sufficiently for the stereo tracking to settle, after the first 20 degrees or so of rotation. Because of this, an in-line attenuator (such as the kind you can buy for airline use) may be useful if you use sensitive IEMs for mobile monitoring. 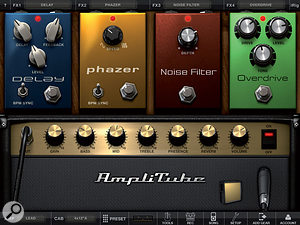 Apps that use the dock connector, such as Garageband (below) will recognise the iO Dock with no trouble, while those that expect TRRS jack input (such as IK's Amplitube, shown here) will not. 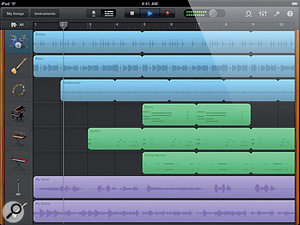 The major benefit of the iO Dock is ease of use: there's simply nothing to it. With an app like Apple's GarageBand, you simply plug in and go: you'll find that everything works with absolutely minimal fuss. Similarly, apps like Nanostudio will play nicely with the iO Dock, allowing you to use a nice full-size keyboard with Nanostudio's included soft synth.

I did try to use the app with IK Multimedia's Amplitube Fender, but it wouldn't play ball. This is because the app is looking for input from the TRRS headset jack, while the iO Dock connects using the docking port. Do be aware that the app must be compatible with dock connectivity in order to function correctly with the iO Dock.

The quality of the preamps is perfectly acceptable, and just what you'd expect from an interface that's affordably priced but nevertheless provides two preamps. They're relatively clean and honest, and there's no obvious or excessive coloration or distortion, though of course they can't be classed as esoteric.

My only real issue with the device is the build material. The iO Dock doesn't feel like it'll fall apart, but it's a bit hollow and weightless. The plastic used is a little light, and the silver parts look and feel kind of cheesy in person. It's what you'd expect for something iOS related at this price, but that's more due to the current 'iOS premium' than the list price and build matching up. I also found the iPad 2 had a little 'play' to it when fitted using the adaptor, shifting up and down if nudged. The switches are OK for the price but, oddly, the knobs are a lot nicer, and have a satisfying and very consistent resistance.

It'd be useful to have a regularly updated list of compatible apps: at the moment, anyone looking to use the Dock with a specific app will need to email Alesis or the app developer in advance, or hunt around on the Internet to check for compatibility.

Despite some little niggles, the iO Dock is (for now) the simplest and in many ways the most convenient method of adding such easy-to-use and comprehensive I/O to your iPad. The 'dock' concept — and especially the lack of cabling, aside from the power cable — is a wonderful thing. If you're using one of the major apps with Core Audio, Core MIDI and dock connectivity, there's no simpler way to add a full complement of inputs and outputs to your iPad than buying the iO Dock.