Apogee's Jam is an audio interface designed to connect a guitar to an iPad, iPhone or Mac. Unlike most such devices, which utilise the bi-directionality of the headphone socket for input and output, and rely on the A-D converters in the host device, the Jam uses the dock port to connect and has its own on-board A-D converters. A further important distinction between the Jam and its competitors is that it has no audio output, so you'll need to connect headphones or speakers to the jack socket of the host device. The Jam requires iOS 4.3 or later and a Core Audio-compatible app, or Mac OS 10.6.4 or later if it's being used with OS X. 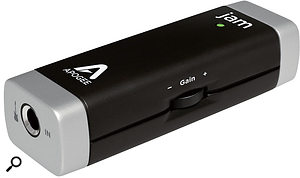 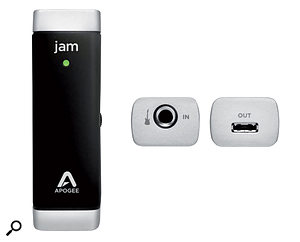 The Apogee Jam has a jack input for guitar and a single USB port that sends digital audio to the host device. Audio output is handled by the host. The small interface is supplied with two cables: one for connection to the iPad (or other iOS device), and the other for connection to a Mac. Although the cables are relatively short, they do free the Jam from needing to connect directly to the iPad, something that would put unnecessary strain on the socket and the Jam itself. Each of the cables locks securely into its respective socket, too, keeping it secure when you're playing.

The unit itself is very light, with a plastic body, and has a small plastic thumb-wheel on the side to control input gain. There's also a three-state LED indicator, a quarter-inch jack socket and a USB output socket. On the inside, the analogue to digital conversion circuitry operates at 44.1kHz, 24-bit.

As far as connection is concerned, there are some pros and cons to consider. In the favour of the Jam is the fact that the cables are detachable, so if one of them breaks, you won't need to replace the unit, unlike the competing iRig or Peavey AmpKit Link. On the other hand, if you forget the cable for your Jam at a gig, you're stuck. It's good that the jack socket itself has a solid feel that compares favourably with competitors.

Being able to alter the input gain with a rotary control is a major difference between the Jam and competitors. Guitarists will appreciate that turning down the guitar itself in order to adjust the input signal will change the tone of the sound. The Jam allows you to retain the full tone of your axe without overloading the input, which is great. There is also an 'Auto Soft Limit' built in, to help you by taming any accidental peaks in level.

The Jam worked flawlessly with all the apps I tried that support the iOS Core Audio protocol, adding no noticeable latency when I used a Guitar Amp track in GarageBand, for example. It's nice that the Jam has 24-bit converters, but note that GarageBand will reduce the word length to 16-bit. This can be proven by exporting GarageBand for iPad projects recorded with the Jam, via iTunes: the audio files will be 16-bit. When it's used with a Mac, however, 24-bit recordings are captured.

Where the Jam does score over the iRig specifically is signal-to-noise ratio. The iRig makes an audible fizzing noise, while the Jam, although not silent, has a much less intrusive low-level hiss. To be honest, I think that audio quality when recording guitars is a moot point anyway, as the source is fairly lo-fi! One small point against the Jam is that you can't use your guitar at the same time as outputting video from the iPad — the Jam does not function when connected to the dock-connector breakout socket on the Apple AV adaptor — so you'll need to use something like the iRig or AmpKit Link if you require simultaneous video mirroring.

Counterbalancing this criticism is the fact that you can use the Jam with all Macs, while hardware solutions that use the TRRS jack connector can only be used with Macs that have TRRS headphone sockets: those that support the Apple iPhone Headset and Microphone.

Although the Jam appears pricey compared to the competition, it is a well-executed design performing the intended task flawlessly. Given its built-in A/D conversion, manual level control and solid build, it certainly has the edge over the competition, in terms of both features and sound quality.