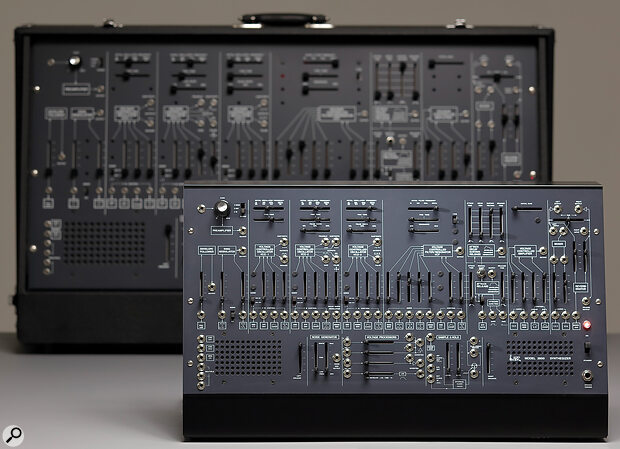 Back by popular demand: Korg have miniaturised the ARP 2600 but kept the spirit and sound of the original very much alive.

I’m sure that there have been millions of words written about the ARP 2600, and I have probably contributed more than my fair share over the years. But the world never seems to get tired of what might be ARP’s finest creation. It’s not as impressive as the ARP 2500, nor is it as convenient as the Odyssey, and it’s certainly not as easy to use as the ProSoloist, but it embodies a wonderful compromise of the impressive, the convenient and the straightforward.

Now, having secured the blessings of David Friend, co‑founder and eventual President of ARP Instruments and one of the designers of the original, Korg have recreated the 2600 not once, but twice. I reviewed the first version, the ARP 2600 FS, in late 2019 and fell in love with it (see March 2020 SOS review). I don’t think that I’ve touched my original ARP 2600P since. This is because, after I returned the review unit to Korg, I was unable to stop myself from ordering a new FS which, as well as being perfectly calibrated, is clearer, brighter, quieter, and hasn’t suffered from a crackly or intermittent connector in two years.

It was perhaps no surprise when the FS sold out almost immediately, nor when — a year later — Korg announced that they would be shipping a smaller, more affordable and more obtainable version, the ARP 2600 M. This has now arrived. So, has Emperor Zorg’s malevolent Shrink’O’Matic harmed anything, or has it simply made the 2600 more convenient and more attractive to a wider spectrum of potential owners? Let’s find out.

When I opened the box from Korg, I had a surprise. Rather than discovering the packaging protecting the 2600 M, or perhaps an inner box containing the packaging containing the 2600 M, I found myself removing a small suitcase that contained the synth itself together with its power supply, a manual, a sheet of ARP stickers, a packet of patch cables and a Korg microKEY USB keyboard (the last of which isn’t part of the M, but an optional accessory) all ready for use. It’s a very unusual approach, but I have to admit that I was impressed. This was a good start.

The M lacks the wooden case of its larger sibling, which means that it also lacks the lid that protects an original 2600 or the main cabinet of the FS when they’re not in use. Instead, it has a wrap‑round steel case with all of the controls on the front and various connections on the left‑hand side. Nevertheless, you would have to look hard to distinguish between the front panel of the M and that of a shrunken FS because there’s just one difference: the multiple has shrunk from four sockets to three. It’s easier to spot the changes when comparing it with the original — outputs for CV2 (the uppermost note played) and the modulation CV (MIDI CC01), the addition of the ARP4012 (1971‑1975) or ARP4072 (1976‑1981) filter selector switch, and the loss of numerous calibration trimmer access points. In addition, the M uses Odyssey‑style slider caps whereas the FS retained the larger caps from the original. This makes perfect sense in the context of the smaller panel but, given the 40‑percent shorter throw of the faders and the loss of the little pointers on the original’s caps, this makes it harder to draw and recreate sounds when using printed patch sheets or the time‑honoured method of making chinagraph marks on the panel itself. Such differences aside, the M is clearly the same synthesizer as the 2600 and the main cabinet of the FS; even the elliptical speakers have been retained, although these are smaller than before. It would have been great to see these replaced with extra VCAs, mixers and multiples, or even something akin to the excellent CMS upgrades from Phil Cirocco, but maybe that would be hoping for a bit too much. Oh well... one can dream.

The biggest functional change between the M and the FS is, therefore, the omission of the 3620 keyboard. This means that (in...