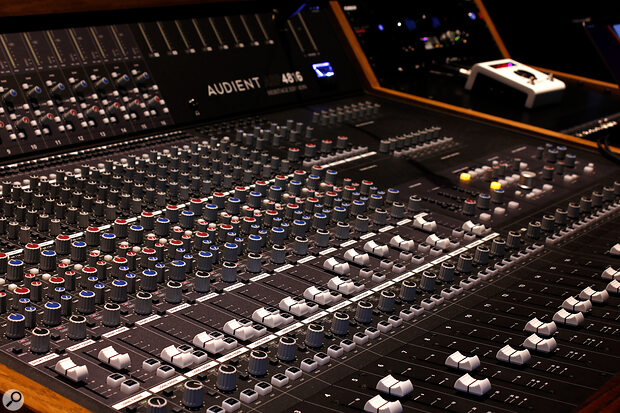 The ASP4816 offered big‑console features in a project‑studio footprint, but its new souped‑up sibling offers that bit more...

For years now, since people first started working ‘in the box’ without a recording console, we’ve seen countless standalone products emerge whose purpose is to deliver separately the various functions once performed by a traditional mixer. You can buy racks of preamps, EQs, compressors, summing boxes, monitor controllers, cue‑mix facilities... the list goes on. Some of those can, of course, be very useful in their own right, but if you do a lot of recording, particularly of drum kits, full bands, other multi‑player ensembles, or anything else requiring lots of inputs and monitor mixes, you might find yourself adding several of these products to your setup. And in that scenario, there’s a very strong argument that you should just go back to using a console! A good console can prove more cost effective (assuming equivalent quality), but an analogue console in particular gives you hands‑on, one‑knob‑per‑function control in an intuitive, convenient layout.

Perhaps this is why recent years have seen the launch of several high‑quality analogue consoles, from the likes of Neve, SSL, API and Trident. Another name that has earned a very strong reputation in this market is Audient, who were founded by Dave Dearden and Gareth Davies back in 1997. The heritage stretches back further than that, though: the pair were behind the respected DDA consoles of the ’80s and ’90s, and worked on a range of consoles for other famous names over the years. In the last decade or so, Audient have increasingly catered for in‑the‑box and home studio producers, with two popular audio interface ranges (which offer remarkable quality for the money), as well as ADAT‑equipped preamps and monitor controllers, among other things. But they remain very active in the studio console market too, through their acclaimed ASP range of analogue mixers. They’re not ‘cheap’ by any means, but they’re far more keenly priced than anything I know of that’s comparable in quality.

The latest model, the ASP4816‑HE is very much a case of evolution rather than revolution, with much of its construction, circuitry and features being exactly the same as on the original ASP4816, released a decade ago and reviewed by Hugh Robjohns back in SOS October 2012. That model, which remains in production alongside the HE version, drew heavily on the original ASP8024 (SOS October 2000), which was treated six years ago to a Heritage Edition refresh (SOS September 2016). The ASP4816‑HE is a revision along similar lines, but includes some features not found in the 8024‑HE, and lacks some options that aren’t really needed due to the lower channel count. 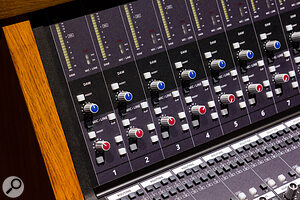 Each of the 16 input channels has a mic/line preamp, as well as a separate DAW input, each with its own insert.At heart, then, the ASP4816‑HE is a 16:16:2 in‑line recording console, with 16 dual‑input mono channels being joined by 16 mono subgroup buses and a master stereo bus. But that’s underselling it a little, as will become clear when I discuss the subgroups below. Each input channel has one of Audient’s wonderful, clean‑sounding mic preamps, along with an EQ section, six aux sends, two cue‑mix sends and two faders: one long, one short, each with a pan pot and independent routing. Channels 5‑16 come as one of Audient’s standard 12‑channel blocks (as used in other consoles), while channels 1‑4 are on a separate four‑channel block. Amongst the other features are four stereo monitor outputs and monitor‑control facilities, a talkback mic input with footswitch‑operated talkback control, as well as a (post‑insert, pre‑fader) stereo bus compressor. Bar some cosmetic changes, all of this is just as it was on the original ASP4816 model.

New features in this Heritage Edition include what Audient describe as Vintage Mix Bus Processing, which can be switched in/out of the stereo mix bus signal path (pre inserts and compressor), and which I’ll cover in more detail below. There’s now a moving‑coil gain reduction meter for the mix‑bus compressor, and the compressor now also includes a ‘bass expansion’ feature — a side‑chain high‑pass filter to you and me! Audient seem proud about the use of discrete John Hardy 990 op‑amps in the signal path and bus‑processing chain, the main purpose of which is to lower the already low noise floor. There’s now a dedicated headphone amp too, a feature which more than one Audient console owner I know will welcome!

The metering has been treated to a refresh, with the LED meters now a classy‑looking white — not so bright that they dazzle, but they always remain easy to see. This change isn’t solely cosmetic, since the LEDs chosen are low‑power ones, and contribute to the console’s lower power consumption compared with the earlier model. Speaking of power, another tweak you probably won’t notice at first glance is that the HE version has a fanless, noise‑free, switch‑mode supply built into the console; you won’t need to find a home for a separate rack unit. I spent a full day checking out a console that...