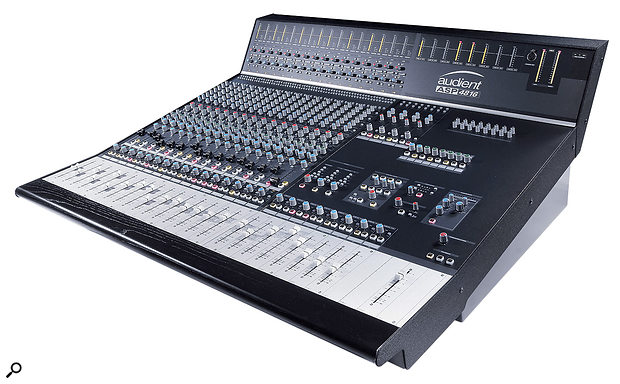 Audient's modern classic is now available in a smaller format — but there's nothing cut-down about the sound!

We've all read or heard about 'classic' sound mixing consoles from hallowed manufacturers like API, EMI, Helios, Neve, SSL, Trident and many, many others. But what makes them 'classic'? Is it an association with a specific sound character — like the Germanium-transistored EMI TG12345 console that was used for recording the Beatles and Pink Floyd — or the introduction of innovative new ways of working, like Solid State Logic's in-line and recallable 4000E series desks? Or perhaps it's more about associations with classic bands and performers of the day?

In truth, it's probably all of these things, and more besides, but surely longevity and ubiquity must figure too, and if that's the case, the 'classic console' accolade belongs to Audient's ASP8024. It seems impossible, but this elegant console has been in continuous production for almost 15 years now — I reviewed the ASP8024 way back in SOS March 2000. Aside from the addition of an optional DAW control panel, it hasn't changed at all, which is a testament to how good a design it was back then and still is today — and it also explains why it remains such an immensely popular analogue console amongst project studios, production rooms and countless colleges and universities around the world!

However, technically accomplished and good value though the ASP8024 undoubtedly is, not everyone has the need or space for a large console with a minimum of 24 input channels — and that's where the company's new ASP4816 console comes in. What Audient have provided in this new 'compact' console is, essentially, a repackaged version of the ASP8024, to make it physically more compact and more suited to smaller-scale situations. Consequently, it has a fixed number of input channel strips (16), with fewer auxiliary and mix buses, and it sits within a more compact frame.

However, this new console not only uses the same proven circuit designs as the original, it actually uses exactly the same circuit boards for the most part. In other words, it's the same as an ASP8024, but with some bits left out! Of course, this makes it easy and very cost-effective for Audient to produce, while guaranteeing the same exacting technical specifications as its larger sibling.

A channel strip from the ASP4816. Each channel features a three-band EQ.

Since this new console is so similar to its larger sibling, I'll just describe the few significant differences here (if you would like a more in-depth description of the console's structure and features, please look up my original review). Having said that, I'm sure a brief overview of the new console would be useful to set the scene, so, in essence, this is a compact, in-line console with 16 channel strips, each capable of handling two signal paths, which are nominally the mic/line input through the 'short fader' path to the mix buses, and the DAW input via the long fader to the stereo master bus. The same light and dark panel colouring has been employed to help differentiate between the two signal paths and their associated controls.

Each channel strip can address 16 mix buses plus the stereo master bus, along with six auxiliary buses and two Cue buses. In contrast, the ASP8024 boasts 24 mix buses (plus the stereo master), together with a total of 12 aux and two cue buses. Each channel features a four-band EQ (plus a high-pass filter on the mic preamp), divided into a pair of high and low shelf equalisers, and a pair of parametric mid-bands. These two EQ sub-sections can be independently switched between the long and short fader signal paths, as required. Of course, both the long and short fader paths can be routed to the stereo master bus, to provide 32 inputs for mixdown through the channel strips. Interestingly, the ASP8024 channel section is constructed from 12-channel circuit cards, so the new ASP4816 employs a standard 12-channel card (with a few switches left out), and a newly designed four-channel version to provide the channel count of 16 required in this console.

In addition, the console incorporates the same four stereo return channels, which can be routed to any of the 16 mix buses, the stereo master bus and the two foldback buses. There are also eight audio subgroups that eavesdrop across the first eight mix buses. However, they all have insert points which can be used as additional line inputs, so that, taken all together, the stereo returns and groups provide an additional 16 inputs to the stereo master bus, bringing the total number of mixdown inputs to a whopping 48 — hence the name: ASP4816.

Looking more closely at the channel-strip configuration, it's almost identical to that of the ASP8024. The mic-preamp controls and channel metering in the console bridge are exactly the same, in fact, and the channel strip only differs in missing a couple of buttons. For example, there are only eight mix-bus routing buttons instead of the larger console's 12, and the six auxiliary send controls lack the 'shift' buttons of the ASP8024 that access the second bank of six aux buses. Other than that, the channel strip is identical, with the same dual paths, the same switching flexibility, the same EQ, and the same long and short faders.

ASP4816 rear.The monitoring-section controls and facilities are absolutely identical too, with the same studio speaker and dual 'foldback' outputs for artist headphones, and the same control-room monitoring section, complete with the excellent solo-in-place and solo-in-front facilities. The same talkback facilities are also retained, along with the line-up oscillator and the excellent (but non-patchable) stereo master bus compressor. The aux masters and mix-bus trim control sections have been pared down compared to the ASP8024, because of the reduced number of buses, but all of the same facilities are retained. Amusingly, the new console also shares the slightly eccentric way in which the control sections are 'scattered' across the panel surface! The rear connector panels are the same as the larger ASP8024 too, other than the reduced number of channel inputs, bus and aux outputs.

Arguably the most significant — and very welcome — difference from the ASP8024 is that the ASP4816 incorporates a switched-mode power supply within the console frame, instead of requiring a separate rackmounted linear supply. This works with any mains voltage between 90 and 264VAC, and is fanless: the console uses passive convection cooling through inlet slots under the fader panel, and venting at the rear of the meter bridge. For servicing, the entire top panel hinges at the base of the meter bridge and can be raised up to provide easy access to all the circuit boards.

Given the large number of satisfied ASP8024 users around the world, the new AP4816 is a no-brainer for anyone seeking the flexibility and quality of the larger desk, but in a more compact format. The modestly reduced number of mix and aux buses is a very acceptable compromise that will have a negligible impact for the typical applications for which this console is optimised. For that reason, not to mention the shared components, the ASP4816 is every bit as impressive as its larger sibling, with the same excellent technical specifications and facilities, and remaining just as easy to use.

One of the most cost-effective large-format analogue consoles is now available in a slightly pared-down format to suit smaller rooms and smaller budgets — but with the same big sound and feature set.