A-T have used their innovative rectangular diaphragm concept to come up with this new instrument mic. Read our exclusive review!

Audio-Technica launched their 50-series flagship microphone range with the intriguing AT5040 (http://sosm.ag/dec12-at5040) two years ago, at an AES convention in San Francisco. That mic was their first model to employ not only a rectangular diaphragm, but to use four of them in a clever active array to deliver an impressively low EIN of just 5dBA SPL. Unlike conventional circular diaphragms, which have a single resonant frequency related to the diameter, a rectangular diaphragm has two resonant frequencies, neither of which tends to be as ‘peaky’ as that of a round one. The arrangement also manages to combine many of the strengths of both large diaphragms (low self-noise and high sensitivity) and small diaphragms (better off-axis response and greater HF extension). The A-T boffins have been working hard on further applications for their intriguing rectangular electret diaphragm, and at long last a second 50-series model is being launched at this year’s AES convention in LA.

The AT5045 is a compact, side-address cardioid microphone, and we have been given exclusive advanced access to a pair of early production models. Whereas the AT5040 is quite a chunky microphone, the new AT5045 is an altogether more discreet design, roughly the same size as a conventional end-fire pencil mic. However, the physical dimensions of a rectangular diaphragm obviously do not lend itself to an end-fire configuration, and consequently the AT5045 is arranged as a side-address microphone, much like a ribbon mic.

The main body of the mic is finished in a dark satin grey, with a diameter of approximately 26mm. A standard XLR connector occupies the base of the tube, and 48V phantom power is required for the internal impedance converter and output driver electronics. The cylindrical body tube is gently chamfered at the top, where it joins with a slightly slimmer silver capsule frame, which houses the rectangular diaphragm behind a mesh grille. The AT5040 model employed an internal floating shockmount to support the capsule array, and the mounting arrangement here looks similar. The overall microphone length is about 177mm, and at 196g the microphone feels quite substantial. 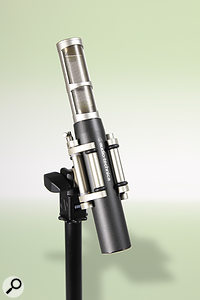 The active area of the capsule itself measures roughly 32mm high and 14mm wide, which is approximately half the dimensions on each axis of the AT5040’s capsule. Assuming the capsule in the AT5045 is the same as that of its elder sibling, the diaphragm features a vapour-deposited gold conductive layer, and the two-micron diaphragm substrate features a patented double-wave ‘honeycomb’ surface pattern to increase stability and rigidity.

Audio-Technica have long been champions of electret capsules, and some of the world’s best mics are electrets (such as DPA’s 4006 and 4011, for example). Not surprisingly, then, the capsule employed in the AT5045 is an electret in which the electrostatic charge is stored permanently on a dielectric layer on the inside of the back-plate. During manufacture this initial charge tends to decay to some extent before reaching a stable level, which then persists for decades, so to ensure that the mic’s characteristics remain consistent over the mic’s entire lifetime, Audio-Technica ‘pre-age’ each capsule.

The review microphones were supplied as a matched pair in a foam-lined hard-shell plastic storage case, along with two standmounts (see ‘Sermon On The Mount’ box) and two foam windshields. The windshield is a simple foam tube that slips down over the mic grille. Unfortunately, neither the handbook nor the technical specifications were available at the time of writing.

The AT5045’s sibling, the AT5040 vocal microphone, is notable (among its other qualities) for an extraordinarily high sensitivity — an astonishing 56mV/Pa, which is a good 10dB hotter than most dedicated vocal mics. Thankfully, Audio-Technica have bestowed the AT5045 side-address cardioid with a much more ‘conformist’ sensitivity, broadly comparable with most small-diaphragm electrostatic microphones (although it isn’t, strictly, a small-diaphragm mic, of course). 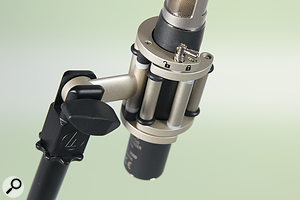 The AT5045 is supplied with an elegant locking stand-mount clip.In the absence of any official specifications I compared the new Audio-Technica offering directly against a Sennheiser MKH40. I mounted the two mics side by side and roughly 300mm from a small single-driver loudspeaker reproducing pink noise, and set the level to produce roughly 94dBA SPL at the microphone capsules (ie. around 1 Pascal of sound pressure). The mics were connected to a GML 8304 mic preamp, which has accurately matched gain switches for each channel. A channel gain of 40dB produced an average output level of +4dBu (0VU) from the AT5045, and with the same gain applied to the MKH40 the output reached +8dBu. So, given that the MKH40 has a published sensitivity of 25mV/Pa, the AT5045 must therefore have a sensitivity of around 16mV/Pa.

The AT5045’s overall on-axis tonality is subjectively a little brighter than the MKH40, and I suspect it exhibits a broad 5dB presence boost centred around 6kHz. This gives it a crisp character, emphasising transients nicely, although it could also sound a touch strident when used to close-mic stringed instruments.

The polar response is clearly cardioid-ish, but with a noticeably omnidirectional response at low frequencies. This is not an unusual characteristic, but the effect was much more obvious than with the MKH40. With the sound source 90-degrees laterally off-axis, the output level from the AT5045 dropped by roughly 8dB and exhibited a moderate amount of off-axis coloration. However, although the attenuation for a source directly behind the microphone increased to around 14dB overall, the sound character in this condition became extremely coloured, with a nasal quality.

The polar response is considerably narrower in the vertical plane, thanks to the much greater diaphragm dimension along this axis. So changes of source height in front of the mic exhibited more pronounced HF roll-off effects than the equivalent changes around the horizontal plane. This could be either a help or a hindrance, depending on the situation, and so it pays to give a moment’s thought to the optimal mic orientation (vertical or horizontal) for a given source — much as you would for a ribbon mic.

The AT5045 is an interesting microphone that is visually elegant and sounds extremely good. It leans gently on the bright side of neutral, and its off-axis character is more coloured than most similarly priced conventional small-diaphragm mics, but it is also as quiet as many large-diaphragm mics. The different polar-pattern characteristics in the vertical and horizontal axes can be used to advantage in managing spill, too. Overall, a worthy addition to Audio-Technica’s 50-series range.

Microphones featuring rectangular capsules have historically been the preserve of Scandinavian microphone manufacturers, such as Pearl and Milab.

Sermon On The Mount

The sophisticated standmount, called the AT8482 (£249$249), employs a similar mechanism to that of the wonderful shockmount supplied with the AT5040. This level of engineering is clearly a feature of the 50-series range, but in the case of the AT5045 the mount is essentially a hard-stand design without any significant shock isolation.

The stand adaptor spouts an aluminium frame supporting two C-shaped brackets at the top and bottom. Mounted between these are two pivoting cradles, and these form the actual microphone clamp. Rubber rings positioned along the side rails grip the microphone when in the closed position and help to damp out any resonances or vibrations.

The really elegant aspect of this unusual design is that, as the microphone is introduced into the cradle brackets, they rotate with the pressure so that the outside edges close around the sides of the mic to grip it very securely. At the same time, the inner ends of the cradles move back into the inner C-frame until magnets embedded in the cradles align with magnets in the static C-frames to hold the mechanism firmly in the closed position. If required, the mic can be pulled out and removed, given a deliberate effort, but the mic is very unlikely to fall out accidentally, even if the mount is inverted or shaken. However, a small spring-loaded lever key on the C-frame engages a locking pin to fix the cradles in the closed position for complete security.

Although it is very elegant and adds very little visual bulk to the mic, I am a little surprised that a proper suspension mount isn’t provided. There are two other aspects of the standmount that also disappoint slightly. First, there is no provision to secure the microphone cable against the mount, which would help with cable dressing and also reduce significantly any vibration reaching the mic through the cable. It’s not a deal-breaker, but in such an otherwise wonderful design it is an obvious omission. Secondly, the locking pin engages with a small white plastic ferrule in one of the inner cradles, but I found this ferrule could fall out easily. Fortunately, I always managed to find it again, but I can see this getting lost very easily ‘in the field’. Hopefully it will be glued in for the full production versions!