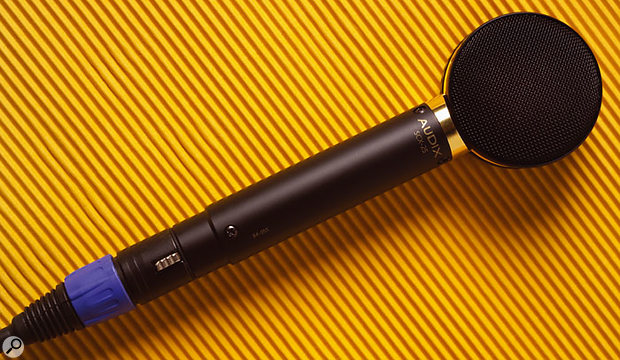 Large-diaphragm mics don't have to be bulky and unwieldy, as this compact new contender from Audix demonstrates.

The Audix SCX25 is a large-diaphragm studio condenser mic with a fixed cardioid polar pattern, but housed in an unusually small body. While there will always be the need for physically large microphones to help make the vocal talent feel cherished, large-diaphragm mics in compact cases are a lot easier to place, and far more visually discreet. The SCX25 represents the top of the company's capacitor mic range, and is produced entirely in America. It is shipped in a smart foam-lined wooden box within a cardboard outer sleeve, and is accompanied with a sheet of generic specs and suggested applications.

A side-address microphone, it displays more than a passing resemblance to a lollipop — a 50mm disk supported from a 95mm stem. The physical design is claimed to minimise acoustic reflections and diffractions, and enables the capsule head to be positioned with ease even in congested areas. The microphone is mounted to a stand using a simple clip-on bracket (complete with 3/8-inch thread adaptor) which slips onto the slim 20mm-diameter stem. The SCX25 is not supplied with a shockmount adaptor, but Audix claim that it doesn't need one thanks to a patented capsule suspension within the housing disk.

The microphone body is made of brass, anodised matt black, with a highly polished frame around the capsule and at the top of the stem body. The solid-state, transformerless impedance-conversion electronics are contained within the stem, which terminates in the usual three-pin male XLR connector. The front of the mic is indicated by the Audix name and model number etched into the brass stem just below the capsule.

The capsule is hard to see through the dense but slightly flexible wire grilles on either side of the disk, but it is apparently one inch in diameter with a five-micron, gold-sputtered mylar diaphragm. This is a true externally polarised capacitor mic that requires phantom power (quoted as 48-52V, but no figures are given for supply current). The sensitivity is a generous 27mV/Pa, with self-noise of 14dBA, and a maximum SPL of 135dB (for one percent distortion). The frequency response is given on the supplied spec sheet as simply 20Hz-20kHz, but elsewhere I found a rather wide tolerance range of +5/-2.5dB. What you see is what you get with this mic — the polar pattern is fixed, and there are no high-pass filter or pad switches. The mic weighs 170g, but much of that weight is in the capsule, making it noticeably top-heavy.

The obvious starting point in forming an opinion on the SCX25 seemed to be to compare it with the Microtech Gefell M930, since they share similar physical attributes, but I also put it up against my trusted standards: the Neumann TLM103 and the small-diaphragm Sennheiser MKH40. All were hooked up to a GML mic preamp as the front end, and then through a Yamaha DM1000 mixer and on to PMC monitoring.

The first thing to test was the internal shockmount. The M930 isn't supplied with a shockmount as standard (although a rubber 'doughnut' stand adaptor is optionally available and works very well), but my TLM103 sits in a full cradle, and the MKH40s have shockmounted clips as standard. I mounted these mics on adjacent stands and, having adjusted input gains appropriately, I was impressed with the isolation from mechanical vibrations achieved by the Audix mic. Far better than the M930, and very similar to the performance of the shockmounted Sennheiser and Neumann mics.

Next up was a listening test to male voice — mine, in fact! Working at a distance of about 30cm, the sound came over as clean, slightly lean, and with a hint of added presence or air. It didn't appear to have the bass extension of the M930 or the MKH40, and even the TLM103 sounded warmer. Neither did it sound quite as open at the extreme top end, and the overall impression was that it sounded slightly 'smooth' and light — no bad thing in the right circumstances.

The microphone exhibits relatively little proximity effect and I found it possible to work far closer with the SCX25 than with other mics before the sound became excessively boomy, something that was particularly noticeable on acoustic guitar. However, recording close vocals with the SCX25 demands the use of a proper pop screen — it is simply not possible to work without one.

On a 12-string acoustic I found the SCX25 tended to lose control of the complex harmonics and delivered a slightly confused, almost harsh sound in comparison to the reference mics, but as a percussion overhead it worked well to provide clean, clear detail with crisp transients, without excessive splashiness from cymbal crashes. However, on a couple of occasions there was a hint of transient clipping in this application, which I'm fairly sure can be attributed to the mic rather than the preamp, so this may not be the ideal overhead mic if you are working with a powerful drummer. 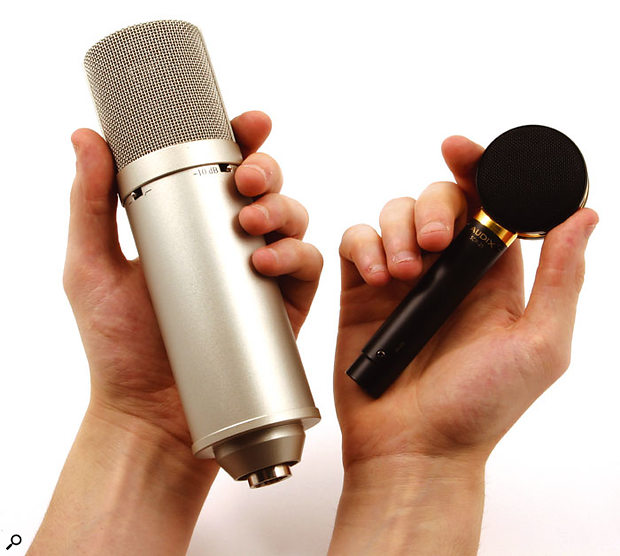 In comparison with many other large-diaphragm mics, the SCX25 is remarkably compact, and it's therefore much easier to position in cramped spaces, for example under a piano lid.Photo: Mark Ewing

The relatively high (by modern standards) self-noise was evident when compared directly with the TLM103 and the M930, and it was also a brighter hiss. To be fair, in musical applications I doubt the mic's self-noise will ever be an issue, but the SCX25 might not be the best choice for spoken-word applications.

The polar pattern was, I found, subcardioid at low and mid-range frequencies, and almost omni at the high end, albeit with a significant flattening of the sides at extreme high frequencies. The latter is to be expected with a large-diaphragm mic, but the poor cardioid shape across the entire range was something of a disappointment, and made the mic much more prone to picking up unwanted spill than my other references. When used for solo vocals, for example, the SCX25 captured noticeably more of the room sound than the M930 or TLM103. The rear null was never particularly deep, reaching maybe 10dB around 1kHz and less everywhere else. However, the off-axis response is quite smooth and reasonably neutral, so at least the spill doesn't sound too coloured or phasey.

One of the specialist applications recommended for the SCX25 is that of miking pianos, and in this role the mic's attributes work well in its favour. The slim design allows it to sit above the strings of a grand piano very neatly (or within the body of an upright piano), and with suitable miniature stands the lid can be supported on the short stick or even closed completely. The insignificant proximity effect and the slightly curtailed bass also help to prevent the sound from becoming boomy, and the integral shockmount minimised mechanical damper noise. Of course, close miking of this kind doesn't suit every musical genre, but where a 'pop sound' is appropriate, the Audix mic works very well indeed, producing a detailed but clean and precise result. I used a small table stand sitting on the soundboard to support the mic in a grand piano, but Audix can supply the optional D-Clip for the SCX25 which is designed to clamp onto the dividing bars of a grand piano's frame.

Finally, I tried the SCX25 as a woodwind mic in a test recording of a school orchestra. Its wide pattern and lean sound worked well, capturing a clean and delicate recording with plenty of character and 'wood'. In fact, I could easily become quite attached to the Audix in this role.

In conclusion, the SCX25 is an interesting mic with an unusual blend of qualities. Its small size makes placement easy, and the internal shockmount works surprisingly well. It provides a high output level, ideal for preamps with limited gain, and although it's noisier than the best it is quiet enough for all normal musical applications.

The lack of proximity effect allows close placement, but I would place a question mark over the maximum SPLs it can handle, and also over it's poor directionality. The tonal quality tends towards the lightweight, with a noticeable, though smooth, high presence peak, but this will often help instruments to cut through in a mix without you having to resort to the EQ. The mic also tends to suit male vocalists with 'deep brown' voices more than female and high male voices, and would make a good alternative for those who find the TLM103 too thick or boomy.