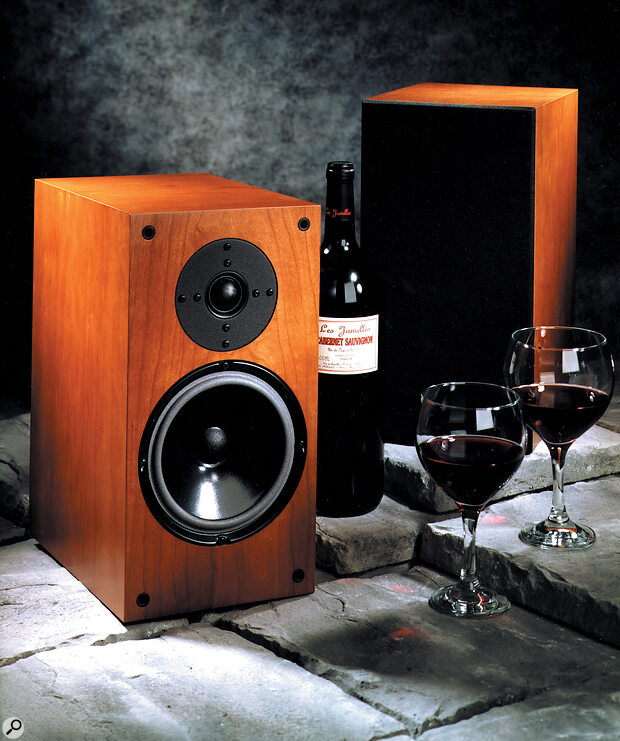 Paul White is all ears as he puts AVI's latest two‑way monitor loudspeaker to the test.

In June '98's SOS, we reviewed the Nu Neutron bookshelf speakers from British manufacturer AVI. Though designed primarily for hi‑fi, these have been adopted by many small studios and edit suites as nearfield monitors, not least because of their accuracy. Feedback from users has prompted AVI to build something bigger, with greater bass extension, though still small enough for nearfield use. Logically, the company nicknamed the new speaker the Bigga‑Tron — and the name stuck!

Very small monitors, such as the original Neutrons and Nu Neutrons, need porting to provide a reasonable bass response, but ports invariably compromise low‑frequency accuracy to some extent (some feel it affects bass timing), so AVI decided to give the Bigga‑Tron a sealed enclosure. Measuring 370 x 195 x 295mm, the enclosure is built from 18mm MDF, veneered in cherry wood (black ash is also available). The tweeter is the same 28mm soft‑dome Scanspeak unit used in the Nu Neutrons and is a relatively expensive component compared to what you might find in a comparably priced hi‑fi speaker.

Handling the bass and mid‑range is a 6.5‑inch Vifa driver featuring a curvilinear doped‑paper cone driven by a 25mm voice coil. These drivers are fed from a passive crossover operating at 3.2kHz, with a Linkwitz‑Riley computer‑modelled response. A single pair of brass‑cored plastic terminals connects the crossover to the speaker cable. There's no provision for bi‑wiring.

With a sensitivity of 88dB/Watt at 1m, you don't need a huge amplifier to do the Bigga‑Trons justice, though you obviously need a good one. For hi‑fi use, 30 to 150W per channel is recommended, but for studio monitoring I'd be reluctant to go below 75W per channel, as it's essential you get clean power on signal peaks. The frequency response is 90Hz‑23kHz, +/‑2dB, and is only 6dB down at 58Hz, which means that the bass end is well represented given the speaker's size. In practice, the position of the speakers affects the level of bass produced: placing them close to a wall lifts the bass end slightly, resulting in a well‑balanced, full sound, but without the overblown impression of bass that many large monitors give.

I tested the Bigga‑Trons using a reputable 100W‑per‑channel hi‑fi amplifier, and immediately found that they were much more sensitive than the ATC SCM10s I normally use in the same room. Having readjusted the level, I started listening. The first thing I noticed was how open and natural voices sounded, compared to most other studio monitors — the mid‑range reproduction of the Bigga‑Trons is extraordinarily clean, and stands up well against the more costly ATCs in this respect. The bass end is well controlled, while high‑end detail and stereo imaging are noticeably better than average. There's less apparent bass than from some other similarly sized monitors, because having an unported cabinet tends to produce a smoother bass roll‑off, rather than peaking up the response to coincide with a typical kick drum fundamental. However, I prefer this for mixing, as too much bass obscures the mid‑range.

AVI's Bigga‑Trons fall halfway between average and esoteric when it comes to price, but their accuracy and neutrality would give many high‑priced rivals a serious run for their money. Vocal reproduction is about as good as on any monitor I've heard, but because the bass end isn't artificially hyped it may sound a little less tight and hard‑hitting than speakers that have had their cabinets deliberately tuned to flatter. Of course, every monitor design is a compromise, and in this case the limitation is level — the maximum SPL of 106dB at 1 metre with 80W of signal is pretty loud, but some people will always want more.

Given their size, price and performance, the Bigga‑Trons are ideal for the smaller studio where quality is a prime concern, and they acquit themselves particularly well on demanding acoustic music, as well as on routine pop work. Indeed, I wouldn't be surprised to find larger studios using them as reference nearfield monitors. If you want a monitor that will let you know what your recordings really sound like, the Bigga‑Tron is one you really should audition.

A practical, accurate and realistically priced nearfield monitor for those who like to hear their music without deliberately flattering coloration.