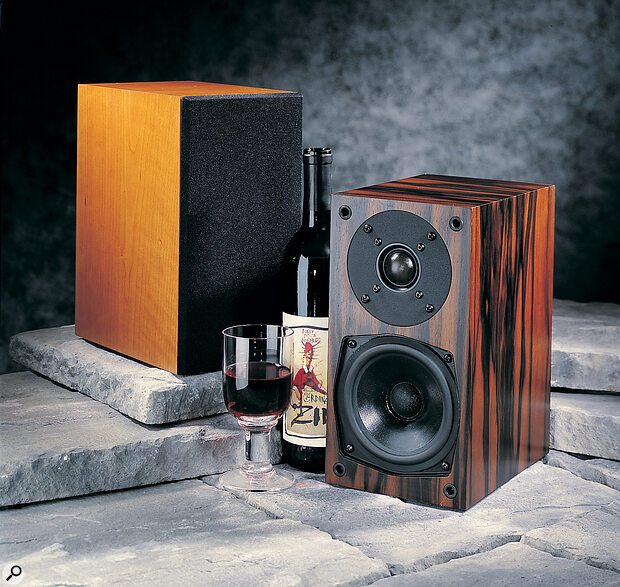 Paul White discovers that it is possible for a compact monitor to deliver a sound that is both accurate and tonally well‑balanced.

AVI are a UK company who have established themselves as manufacturers of well engineered, decent sounding hi‑fi components at sensible prices. Their first foray into loudspeaker design was the original Neutron (reviewed SOS May '96). Although this was a compact 2‑way bookshelf monitor designed for listeners who had no space for larger speakers, the design was also well received in broadcast and studio circles because of its uncoloured, natural sound. It seemed nearly everyone liked the Neutron, but designer Martin Grindrod thought he could do better, so he redesigned the speaker from scratch using different drive units and a much lower crossover frequency of around 3.2kHz. The result is a visually similar but technically quite different speaker that, in comparison with the original Neutron, does sound (and measure), significantly better. Already the pro audio fraternity have placed orders for multiple pairs of these new monitors for use in broadcast, but their compact nature and extremely revealing, uncoloured sound also makes them well suited to small studio and edit suite applications.

At first glance, the NuNeutrons look quite small when compared with other nearfield monitors — the enclosure is only five litres and measures just 265 x 140 x 205mm. Constructed from heavy MDF, the cabinet is fastidiously veneered in cherry or black ash (ebony is available at extra cost) and has a removable grille. Rear connection is via heavy, brass‑cored terminals and, unlike the original model, the bass port is now at the rear of the cabinet.

The driver line up starts with a 5‑inch Vifa bass/mid driver that has a curvilinear, doped paper cone driven by a 25mm voice coil. This is augmented by an expensive, hand‑made 28mm Scanspeak tweeter with a fabric dome. According to marketing director Ashley James, a typical pair of £1,000 hi‑fi speakers would use tweeters that cost in the region of £4 each, while the NuNeutron tweeters are considerably more expensive. Both drivers are recessed into the front baffle.

You might expect such small drivers in a compact enclosure to be bass‑light, but the NuNeutrons actually manage a ‑6dB point of 65Hz and, in a typical small studio room, they sound surprisingly well balanced, though obviously lacking the sub‑bass kick of a full‑range studio monitor.

Of course, there's a lot more to creating a good monitor than choosing a couple of good drivers and putting them in a box. The drivers must be chosen to complement each other, and the crossover must be designed with great care to ensure the drivers work properly together. It's also very important that the drivers perform properly well beyond the crossover frequency because, with a gentle 12dB per octave slope, the overlap region is surprisingly wide. Any performance differences in this area will lead to phase errors that result in poor imaging and a loss in mid‑range transparency. AVI took care to measure the performance of all of the NuNeutron's components at the design stage, rather than rely on manufacturers' data sheets, and the finished design was apparently tested outdoors on a tower in a free‑field environment. Furthermore, the individual drivers were subjected to listening tests with swept sine sources, tests which resulted in an alternative brand of tweeter — one which measured well — being rejected.

The crossover used here is a 3.2kHz, second‑order Linkwitz‑Riley filter designed with the aid of computer modelling. It is not bi‑wirable. The crossover board uses large ferrite‑cored inductors and polystyrene capacitors on a heavy grade PCB, and features impedance equalisation to ensure that the filter works into a constant load — if a crossover is connected to a load that varies with frequency, phase problems will result, causing the effective acoustic centre to move, and this in turn compromises the imaging and can make the speaker uncomfortable to listen to. This is a key area of loudspeaker design that Martin Grindrod believes is overlooked by most other designers, and the larger the monitor, the more difficult it is to resolve. Everything about this design appears to follow sensible engineering principles rather than fashion.

A number of hi‑fi speaker designs actually exploit coloration to make their speakers seem larger than life, something we know all about through our use of enhancers in the studio. The trouble is that coloured speakers only sound impressive on relatively simple material, and tend to be fatiguing after prolonged listening. More serious from the studio user's point of view is the fact that distortions in the loudspeaker may mask distortions in the music. Thankfully, AVI do not subscribe to this approach. 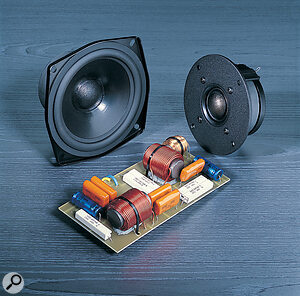 The more you listen to loudspeakers, the more you realise that the commonly measured parameters only tell you a small part of a very large story. No purely measurement‑based test has yet been devised that can tell you exactly how a loudspeaker will sound, so after wading through the technical material (in this case there was a great deal of it), you have to sit down and listen. As you've probably gathered by now, the NuNeutrons' design brief is to be as accurate and neutral as possible, and I can confirm that good recordings of voice and acoustic instruments show them to be exceptionally natural and open‑sounding. Neutral speakers can sometimes be very insensitive due to the use of heavy, doped components, but the NuNeutrons' small drivers are relatively efficient, yielding a sensitivity figure of 86dB for 1 Watt at one metre. The maximum usable SPL is quoted as 104dB (at 70 Watts), which is quite enough for nearfield work, and although the bass end is limited, the overall performance in a typical small studio room is in no way thin or lightweight.

I use a range of classical, jazz and pop material for loudspeaker testing, and make direct comparisons with other high‑quality monitors (including my revered ATCs). What struck me right away about the NuNeutrons was their extremely good stereo imaging — with some monitors you have to make a conscious effort to imagine the sound coming from anywhere but the two speakers, but with the NuNeutrons the soundfield hangs convincingly between the two sound sources with plenty of left‑right definition on panned sounds or instruments recorded in true stereo. Acoustic instruments and voice also sound extremely smooth and natural, yet retain plenty of 'air' around the top end. Delicate high‑frequency percussion is well represented, yet there's no harshness or tendency to fatigue — you could work with these speakers for hours at a time with no problem. It's also possible to drive them quite hard before any trace of boxiness becomes evident.

Pop mixes sound solid, with good separation between the individual instruments and plenty of ambient detail. Transients are handled coherently, giving a solid, believable drum sound, and there's more than enough level at typical monitoring distances. The NuNeutrons provide the ability to hear inside a mix rather than just listening to its surface; for me, that's one of the hallmarks of a well‑designed monitor.

There's no doubt at all in my mind that the NuNeutrons are rather special monitors, and though some may perceive the cost as rather high for what appears to be a bookshelf speaker, I think that would be to seriously misjudge them. It's a fact of life that quality components — even small components — cost a lot of money, and what AVI have managed to achieve in so small a space is extraordinary. I would urge you to listen to a pair as they're more accurate and revealing than the vast majority of monitors out there, regardless of size or price.

If I had to say who might most usefully benefit from owning a pair of these speakers, I'd shortlist those running desktop editing systems (though the NuNeutrons aren't magnetically shielded, so they shouldn't be placed too close to computer monitors), broadcasters, musicians with small project studios based around compact, high‑quality equipment, and anyone wanting a quality control monitor for cassette or CD duplication. They'd also make good secondary reference monitors for studios with larger but less accurate monitoring systems. It's probably no exaggeration to say that the AVI NuNeutron redefines our expectations of what a compact monitoring system is capable of achieving. This is a seriously good British loudspeaker that meets a very real need for a monitor that is both compact and highly accurate.

Target (+44 (0)1582 401244) have designed a floor stand for the AVI NuNeutrons, and will also build custom stands for positioning the NuNeutrons behind mixing consoles.