Behringer keep coming up with affordable toys, and this time they sent us a selection of their 'Vintage' pedals. The folded-metal boxes housing all these pedals have a distinctly vintage look, in keeping with the name, that reminds me of the early Electro‑Harmonix pedals. Sturdy metal jack sockets are used for the inputs and outputs, and there's a standard coaxial socket for external power, although only three of the four units reviewed come with their own power supplies. 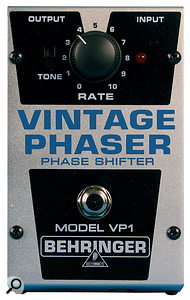 First out of the box was the VP1 Phaser pedal, which can run from a 9V battery or a standard centre‑negative 9V PSU; the battery compartment is accessed by means of a plastic cover in the base. It works all its magic using a single knob and a two‑way tone switch. The familiar retro‑style chunky footswitch provides a true hard‑wired bypass, and there's the expected red LED to let you know when the effect is active. The switching action is very quiet, and the level matches well between effect and bypass.

A single knob controls the phase rate, from a very slow and languid tonal shift to a fast and bubbly effect that sits somewhere between rotary speaker and auto‑wah. With the tone switch in the up position, the effect sounds a bit more pronounced and resonant, but I preferred it in the down position, where slow phasing can be added to the guitar without radically changing its basic tone. Either way, the level of background noise is pretty low. Think 'Breathe' by Pink Floyd and you get the picture. While I can't think of many uses for the faster settings, the slow and medium phase‑rates sound as warm and fluid as you could wish for, so the VP1 gets both thumbs up from me — especially when you consider the retail price ($£45). 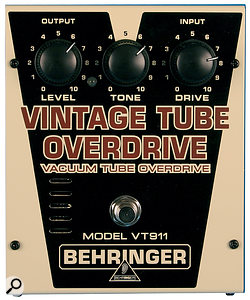 The VT911 Tube Overdrive comes with its own power adaptor, as the on‑board 12AX7 valve drains too much current to make battery operation practical — even though the valve is run at well below its normal operating voltage (which makes it difficult to gauge its actual contribution to the overall sound!). As with the other pedals, the VT911 has a mechanical hard‑bypass footswitch. There's also an excruciatingly bright blue status LED, and just three controls for drive, tone and level. According to the manual, you get "distortion with the distinctive tonal quality that only a real tube can deliver, bringing vintage sound back to life”. Well, the pedal certainly has a wide range, from hitting your amp with just the merest hint of overdrive distortion to heavy saturation. At higher settings the sound reminds me of the old MXR Distortion Plus, which has a slightly fuzz‑like edge to it, but at lower gain settings there's more of a Tubescreamer vibe (but without the same degree of mid boost). The tone control works best somewhere around the centre, but if you want creamy distortion you can back it off to really smooth out the sound. Conversely, there's enough positive range to make the overdrive sound very fuzzy indeed. My preference was for the lower gain settings, where the pedal worked well for classic rock and blues tones. 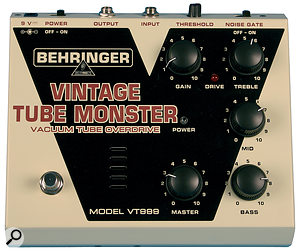 The larger VT999 again employs a 12AX7 valve in addition to its solid‑state circuitry, and in place of the single tone control of the previous pedal you get a full three‑band EQ, plus an effective noise gate with rear-panel threshold control, and a bypass switch for cleaning up the pauses when using very high gain settings. Other than that, you get the expected drive and master level controls, with one LED indicating when external power is on, and another when the effect is active. Once again, the switch is wired to give a true hard bypass, though the review unit had a faulty switch that wouldn't allow it to be turned off.

For me, most of the interesting sounds are to be found down near the low end of the gain control. Once you turn it more than a short distance clockwise you're straight into overt distortion, with plenty of range on the tone controls to get you into scooped metal territory — if going there seems like a good idea! I found the distortion character to be more 'growly' than with the previous pedal, best suited to chugging boogie, or maybe slow blues at lower gain settings. But as you turn up the gain, the tonal character becomes more generic. I'm not sure either of the overdrive pedals really needs a tube to achieve the desired tonal result, but achieve it they can, and at this price (VT999 £79$99.99, VT911 £56$75) I'm not going to complain. 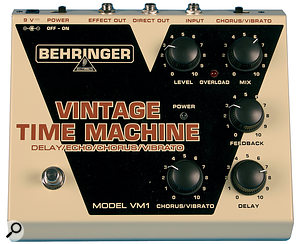 Built into an almost identical case, and with the same number and layout of knobs, the Vintage Time Machine is designed to bring back those old analogue chorus, vibrato and delay sounds. You get controls for level, wet/dry mix, delay feedback, delay time and chorus/vibrato amount. A rear‑panel switch sets the unit for chorus or vibrato‑style modulation (essentially the same, but the chorus setting mixes the modulated signal with the dry original), and this time there are two outputs — one for the direct signal and one for the effect — which opens up some stereo amping possibilities. For mono use, you use only the effect output. Again, power comes from the included PSU with no battery option, and the same blue light indicates power on. When the effect is active, the blue light increases in brightness. The red LED is wired to show overload: if this lights up, you need to turn the level control down.

The secret to the vintage sound is the use of analogue charge‑coupled delay‑line chips. These also recreate the rather high level of noise associated with such vintage devices, which is particularly evident as sounds are decaying. With a maximum delay time of 550ms, the addition of modulation makes it possible not only to create traditional analogue and chorus effects at low delay times, but also to add gentle modulation to the echo effects at longer delay times for a nice ethereal shimmer. The modulation LFO rate seems to be preset to around 1Hz, but used with care you can get some rich chorus effects, as well as shimmery delays. The bypass again keeps things clean when you're not using the effect, while the variable level controls means you can set the effect to come in at the same level as when bypassed, or slightly different if you prefer.

In theory, adding feedback to a short-delay chorus effect should give you flanging, but here the effect is more akin to a tunnel echo with just a hint of flange, so that's not what the box is best at. But other than the occasionally audible background noise, this pedal gives good general results, and it is great value too: at £79$99.99 it recreates those '70s delay sounds for rather less money than you would have paid for a delay pedal back then! The modulation effects are a little limited by the fixed modulation rate, but they're a welcome addition nevertheless.

Despite the cheeky nod in the direction of Electro‑Harmonix with the external styling, these are actually original designs that, although built to a price, deliver a lot of performance for your money. As well as the actual sounds, I appreciated the hard‑bypass foot‑switching, which overcomes what is a problem on so me cheap pedals. My personal favourite was the VP1 phaser, which did exactly what I want a phaser to do with minimal fuss, but it has to be said that all the pedals get the job done much as described on the tin. Cheap they may be, but you can get some really good sounds out of these boxes. Paul White

Behringer's 'Vintage' pedals sound great for the money and all of them benefit from hard‑bypass switching, which keeps noise issues at bay. They may look reminiscent of some famous vintage pedals, but on the inside they're original designs.