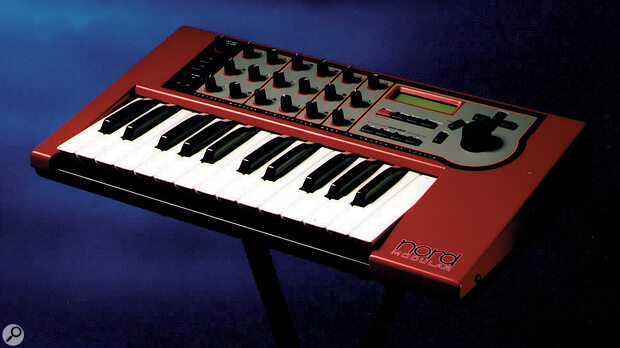 If you'd love a modular synth, but couldn't possibly afford a real one, it's possible that virtual salvation is at hand.

If you've always been daunted by the sheer size and expense of vintage modular synths, yet drawn by their programming potential and flexibility, life is about to take a turn for the better. Clavia, the Swedish creators of the Nord Lead (reviewed SOS May '95 and September '97) have taken virtual analogue synthesis to its next logical stage. Imagine, for a moment, a synthesizer with no fixed signal path — indeed, no fixed structure at all. This synthesizer would contain all the necessary sonic building blocks and give you the tools to connect them together. Using a software front‑end to map out your instrument, you pick how many oscillators a given patch requires, you decide the type and number of filters, LFOs, envelopes... everything. Better still, you can choose exactly how each component part should be wired together, how it reacts to MIDI controller messages — even how it incorporates external signals into the audio chain. Colour this imaginary synthesizer red, liberally sprinkle it with knobs, build it in a package small enough to pick up with one hand, and you have the Nord Modular.

I'm not sure if the Nord Modular's two‑octave, velocity‑sensitive keyboard (no aftertouch) is intended for performance or purely for programming, but with its lack of modulation wheels and pitch‑bender I suspect the latter. Either way, it's incredibly cute, and pretty handy too, although you'd have to decide for yourself if it was worth the £200 price difference between the keyboard and rack versions. The front panel has 18 assignable control knobs, a dedicated volume control, four slot selectors (for each part in a layered or multitimbral performance), various function and navigation switches, a rotary dial and an LCD, plus two transpose switches which give the keyboard a range of six octaves.

Most of the Nord Modular's programming is done via a software front‑end, which looks elegant yet still seems usable. PC requirements are not too demanding either, since the Nord hardware does all the real work: a Pentium 90 running Windows 95 or Windows NT is recommended: for the purposes of the preview I ran the software on both a Pentium 75 Notepad and my main P133 studio PC, with no problems at all. The bad news for owners of other computers is that the Nord's software is currently PC‑only. 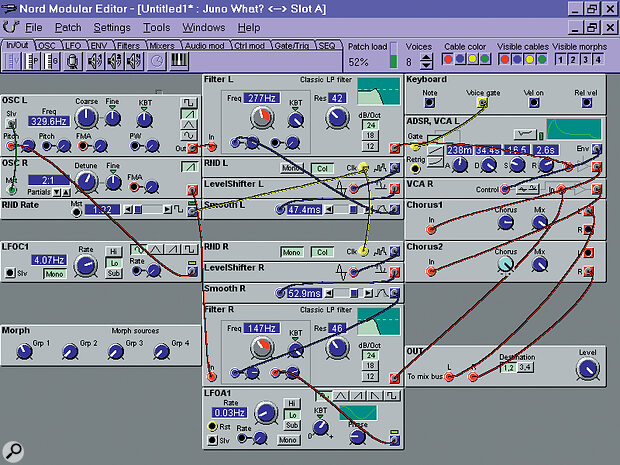 The software, obviously, is what enables you to select modules and cable them together. A wide variety of 'objects' means you won't run out of inspiration in a hurry, but I'll save the full list until next month, when we'll look at the steps involved in designing a synthesizer from scratch. I'll say now that there are all the expected components, and some unexpected ones too. There are eight types of oscillator, low‑frequency oscillators, envelope generators, chorus, delay, distortion, audio and control mixers, and so on, plus more esoteric items such as step‑time sequencers, percussion oscillators, clock dividers, and various logical comparisons which offer mathematical operations. The on‑screen modules are laid out like a real modular synth, but with the added bonus of graphical displays of envelope curves, filter peaks, and even LFO waveforms which change, oscilloscope‑style, as frequency and phase are altered.

To understand a modular system, you need a grasp of how different types of signal flow around the synth. To this end, four types of connection can be made, and these are colour‑coded to help you see what's going on. Connecting two modules together is as simple as dragging the mouse between an output (distinguished by a square frame) and an input (round frame). If you reposition modules on the work area, any connected cables magically stretch to fit, so you can spread things around whilst working and then drag them together to save screen space later. Various views of the cables can be defined, and you can hide them all or actually unplug the lot and start again.

As on a real modular, it's quite possible to experiment by connecting different types of signal. You could, for example, connect the audio output of an oscillator and frequency‑modulate a second oscillator with it.

Patch complexity and polyphony are dependent on the amount of DSP power available. The basic Nord Modular comes with four DSP 'engines', though this number can be expanded to eight with an optional card. I found that a typical two‑oscillator polysynth with LFO, filter, envelope and output mixer stage, plus a few exotic modules of my choice, still left a healthy 16 notes of polyphony to play with. Helpfully, when you select a module, it gives an estimate of the DSP processing it will require — for example, the single largest resource gobbler, a master oscillator, complete with oscillator sync inputs and a modulatable pulse width, requires 11%, and many of the simpler modules require less than 1%.

Much of the pleasure in a system like this is the freedom to experiment with things that you could never do with actual hardware: in real life you don't get to trade off an oscillator for a filter, but since they all exist in DSP RAM, the Nord can handle this kind of thing with ease.

You can build patches from scratch or grab the current settings, modules and cabling and display them on the screen as a starting point. If you want to tweak the sounds you've made, 18 assignable knobs are provided on the Modular keyboard hardware, so you can spend hours painstakingly creating a patch at home, then take it on stage in the confidence that your complex routings are stored safely away but can still be modified during the performance. Clavia have sensibly left the knobs unlabelled, other than by a number, since they can perform different tasks in each patch you call up. When a parameter is allocated for knobby control, its corresponding LED lights up.

If the 18 on‑board knobs aren't enough for you, any external MIDI controller can be used instead, although you can't allocate more than one controller per feature directly. If you want to do this, you need to set the parameter as part of a 'morphing' group and then allocate a knob or MIDI controller to control the morphing group. We'll take a detailed look at morphing groups in the full review. Bear in mind that though you need to use the software front‑end to create new module routings, all parameters of the current patch can be edited via hardware — the keyboard's LCD and rotary dial or an external controller. Perhaps unexpectedly, the Nord Modular's own knobs don't by default send out MIDI information, though Clavia tell me there's a way of setting them up to do so.

I hope this preview has whetted your appetite a little. In next month's full review I'll look in far more detail at what's on offer. I must confess that I've already had to reassess some of my own preconceptions, which previously steered me away from synths that could not be edited by on‑board facilities alone. For this powerhouse of a synthesizer, all rules change. Designing your own synths, as the Nord Modular's software allows you to do, might make you think again about the value of computer‑based editing. Unlike my old modular, the Nord's patch cords and connecting jacks are all noiseless, and there's no danger of running out of leads just as you need to make that one last connection. With the prospect of new modules available in software, and the extensive MIDI and performance control on offer, this looks like a remarkable and ground‑breaking instrument.