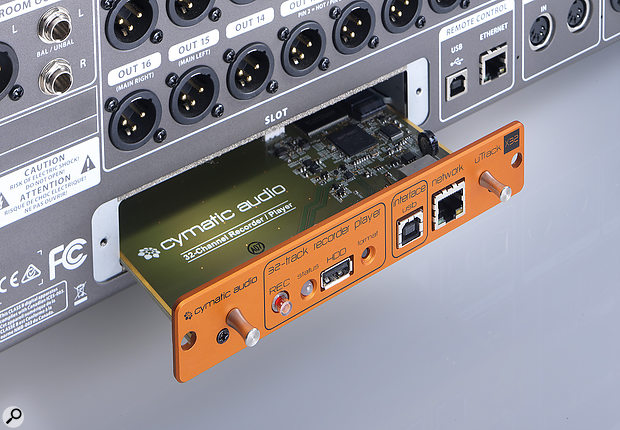 One of the very valuable benefits of digital mixing has been the ability to capture recordings direct from the mixer, without the need for analogue splitters and lots of additional wiring looms. Many small-format consoles — digital and analogue — allow recording of the stereo output direct to a USB memory stick, but the idea of recording all the desk’s inputs and saving them as individual files for later editing and production is an appealing one. The Cymatic uTrack X32 brings exactly that functionality to users of Behringer’s successful and widely used X32 mixer series, as well as the Midas M32. In a nutshell, it is a direct recording card which plugs into the X32 option slot and requires only a connected USB drive to capture all 32 input sources.

The basic concept is an attractive one: install this card and all 32 input channels on your X32 can be captured as an uncompressed multitrack recording by simply connecting a suitable USB drive and pressing the record button on the card itself — you can even use a USB stick if it’s up to the job, although ‘proper’ hard-drive performance is really required for best results. Of course, it is possible to make multitrack recordings direct from the X32 (provided it has the standard Behringer X-USB card installed), by connecting a laptop and running a suitable DAW programme, but simply using a pocket drive on a ‘press and forget’ basis is massively convenient, and for me would have been a really useful thing to have at a great many of my live-sound gigs.

With its bright orange face panel, the Cymatic uTrack X32 is a distinctive-looking piece of hardware. The card itself appears to be well made and sturdy, and arrives well packed in a foam-lined box and sealed inside an anti-static envelope. Installation is quick and straightforward — the full manual can be downloaded from the Cymatic web site, but all the info you need to start recording is contained within the included basic instructions.

My X32 Compact already had one of Behringer’s X-USB cards installed in the expansion slot, so (with the mixer disconnected from the mains, of course) I removed the two screws holding it in place, pulled out the Behringer card and slid the uTrack X32 card in its place. The two screws that secure the X32’s original option card (or blanking plate if it doesn’t have one) are not very long, and the uTrack X32 has a thicker outer panel than the existing card, so I found that the screws were only just long enough to engage their threads — I’d be keeping an eye on the tightness of these, or possibly finding some slightly longer screws. It’s also important to tighten the two screws evenly, because if the card isn’t pushed fully home and dead straight in the slot, one of them won’t actually engage with its thread at all.

After powering the console back up it was time to connect a recording drive — I had a spare 1TB hard drive available so I connected it to the USB port and it was quickly recognised by the card. I got a steady green LED indication that meant ‘ready to record’ but I decided to let the uTrack X32 reformat the drive anyway. There’s a dedicated format button that needs to be pressed twice before the formatting begins, which on my drive took about 30 seconds or so. I tried plugging in a cheap (very cheap, actually) USB memory stick and, after a moment, a steady yellow LED indicated that it was — surprisingly — ready to record, but with under three hours remaining time. I tried recording on both the HDD and the memory stick, and both captured perfect recordings, although the uTrack wasn’t altogether happy with the stick — I could start recording but not stop the process, other than by pulling the stick out of its slot, although even after this heinous act my recordings appeared to be intact when I checked! To start recording there’s a single button on the card panel itself: one press begins recording with a ‘pre-record’ buffer always engaged, so that the captured recording always begins slightly before the button is pressed (this feature would have saved me from several ‘oops I forgot to hit record’ moments in the past). To drop out of record mode requires a long button press (about a couple of seconds), while a quick press starts a new take but with no gap in the recorded material.

What’s recorded on the drive via the uTrack X32 depends on the routing options set up within the mixer, which incidentally doesn’t recognise the uTrack X32 for exactly what it is (presumably because it is not a Behringer product). My X32 showed it as an XUF card and seemed quite happy to work with it. 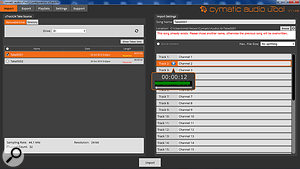 Cymatic’s free uTool app is required to convert your recordings into separate mono WAV files, and will also allow you to prepare multitrack audio for playback through your mixer.After recording various takes I unplugged the drive and hooked it up to the studio Mac to look at what was on it. Each take appears in the directory as a single WAV file (you can drill down and see sub-files but you can’t play them directly), which requires ‘splitting out’ into 32 mono WAV files using a piece of free Cymatic software called uTool. This imports the ‘take’ into your chosen destination folder and converts it into the 32 individual files, which can then be pulled into a DAW for editing. It’s a simple programme to use and the import process only takes a few seconds. Each separate file has a neat little audition facility which plays back the individual track and shows a little waveform. This helps with identifying tracks after the recording session has finished, as we don’t always have time to keep track of everything, especially at a live gig where mixer channels may be used for more than one voice or instrument during the course of the event.

The uTool software can also be used to create multitrack or stereo playback files, which can be exported to an external drive for connecting to your mixer, although full control of playback (and recording) functions is achieved by using another free Cymatic application called uRemote.

Besides recording, there is another really useful aspect of multitrack digital capture, and that is the ability to run a ‘virtual soundcheck’, where individual live sources (recorded either on the day or at an earlier show), exactly corresponding to the performers on stage, are played back through the system. This gives the engineer an opportunity to tweak and tune without having to keep the band happy at the same time (another term for this is ‘mixing heaven’). So a previously recorded take can be assembled and played back through the uTrack X32 direct from your hard drive, or a newly recorded one can be looped for playback through all the same channels as the live sources, using uRemote to start and stop playback. uRemote is available for Mac, PC, iOS and Android, and provides comprehensive control over the uTrack card.

The uTrack X32 is equipped with an Ethernet port for connecting an external router or computer control, and it can of course also be used as a 32-channel recording interface when used with a computer, just like Behringer’s X-USB card.

The uTrack X32 recording card worked exactly as described, and was very easy to install and use. It’s a useful and practical piece of ‘fit and forget’ hardware, and for capturing a live performance in multitrack mode it’s extremely convenient — all you have to do is remember to press the record button, and you can even be slightly late with that. My take on it is that it allows me to offer an additional service to my live-sound customers, which keeps us both happy. On the basis of this brief encounter I think it’s a useful and stable tool which enhances the capability of the already versatile X32.

The uTrack X32 turns your Behringer mixer into a stand-alone recorder, cutting out the need for a laptop when recording gigs.