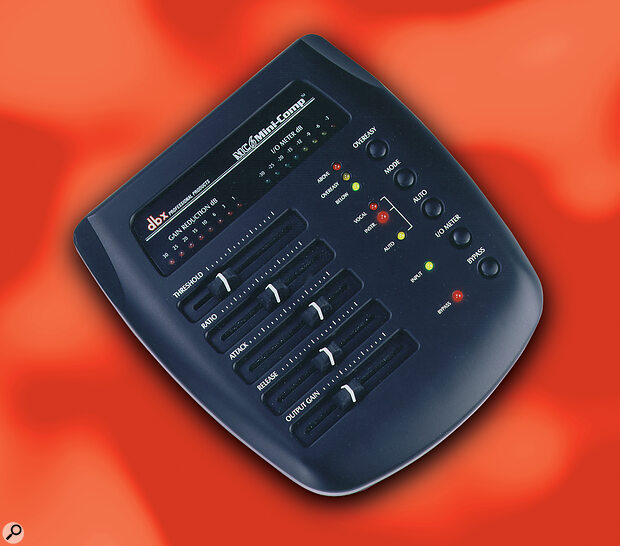 Paul White tries out a compressor that looks like a cross between a portable CD player and a Stealth soap dish, but discoversthe sound is much bigger than the package.

Dbx have been making compressors for a long time, and they can be seen in professional and project studios everywhere, but the MC6 Mini Comp under review here is the company's attempt to take a larger share of the desktop studio market, where not everyone wants to splash out on rackmount processors. Instead, they're offering traditional dbx technology in a plastic desktop package with faders instead of knobs. Optimised to work with line‑level signals of ‑10dBv, the MC6 can handle levels up to +16dBu, so it can be used in the insert points of a professional console or multitracker with equal ease, but it also has a ‑20dBv input instrument setting for live performance use. The bypass footswitch jack on the rear panel is also provided for the benefit of the live musician. Power comes from a supplied mains adaptor, and all connections are on the rear panel. Also included is a metal clip that can be used to secure the unit to the strap of a guitar amp, and a set of adhesive rubber feet for tabletop use.

Inside this deceptively small package is a full‑featured stereo compressor based on the circuitry used in the dbx 160, and though the inputs and outputs are on jacks only, these are TRS types that can accept balanced or unbalanced connections. It's possible to use the compressor in mono mode, but in this case only one channel is usable as the side‑chain circuitry is common to both channels. Perhaps surprisingly on a unit of this price, the side‑chain uses a separate RMS detector for each channel, the outputs of which are fed into a summing circuit. This is far better than summing the audio and then using a single detector, where phase cancellations between the left and right channels can cause the detected level to be lower than the actual level of the individual channel signals.

The OverEasy approach to soft‑knee compression is something dbx are famous for, and the MC6 can be switched between OverEasy and conventional hard ratio modes. Five sliders provide full control over Threshold, Ratio, Attack, Release and Output Gain, but for those who'd rather let the compressor do the thinking, there are two auto modes, for Vocal and Instrument use respectively, that override the Attack and Release sliders and optimise these parameters automatically, depending on the input signal characteristics.

Many budget compressors suffer from poor metering, but the MC6 doesn't fall into this trap, with two 8‑section LED meters to show gain reduction and I/O levels. The I/O meter can be switched to monitor the compressor input or output, depending on the front‑panel I/O button setting, and another nice touch is that all the buttons have status LEDs. Curiously, the top level shown on the I/O meter is ‑3dB, which seems a little low when you consider that the unit can handle levels of up to +16dBu without distorting.

Compressor activity is monitored by three LEDs that show green for below‑threshold signals, Yellow for levels within the OverEasy or soft‑knee range, and red for levels above the threshold. In hard‑knee mode (OverEasy off), the yellow LED remains unlit, as there's a prompt transition from uncompressed to compressed when the signal hits the threshold.

The MC6 has enough flexibility to get most jobs done, and certainly retains the essentials of the dbx sound, which is something of a classic in studio circles.

I checked out the MC6 with vocals, guitar and drums, and was greeted with the characteristic flattering unsubtlety that I've always thought the hallmark of the dbx sound. For reference, most of the tests were conducted with the MC6 connected to the insert points of a small Mackie mixer, and as long as the Output Gain fader on the MC6 was set to near full, there was sufficient level available to keep the mixer's gain structure happy. Vocals from a decent capacitor mic are evened out very nicely, with an audible thickening of timbre, but if you slip out of auto mode and combine a long attack time with a fast release, you can get very close to the opto compressor sound that's currently very fashionable.

With guitar and drums, the Instrument mode provides the best result, as it emphasises the transient attack of the sound while still smoothing out level variations. Drums take on a more aggressive, punchy feel, while acoustic guitar combines sustain and tonal density with a well‑defined attack transient. What's more, you can add quite a lot of compression and the result is still good — you can hear that processing is taking place, but it works in a musical context and doesn't rob the sound of definition.

Switching from OverEasy to hard‑knee mode makes the compression more noticeable, especially at higher ratio settings, but there are times when this is exactly what you need to create a specific effect or to enhance the impression of power.

The MC6 may not look as impressive as a rackmount unit, but it seems to perform every bit as well. Furthermore, dbx haven't found the need to strip down the feature set, other than the fixed stereo configuration — you still get the full complement of controls, a choice of OverEasy and hard‑knee compression, two distinct auto modes and decent metering. My only real criticism is the lack of calibration on the sliders — you don't know what ratio you've selected, or what the attack and release times really are. This isn't vitally important, as most settings are carried out by ear, but I still like to know what's going on in a little more detail.

The MC6 has enough flexibility to get most jobs done, and certainly retains the essentials of the dbx sound, which is something of a classic in studio circles, though it doesn't suit every application. This is a compressor that makes its presence known, in the nicest possible way, and, with such a low price tag, has to be considered something of a bargain.

A compact and cost‑effective way to buy into the dbx compressor sound without compromising on sound quality.