Until now, there has been no ultraportable hardware option for Pro Tools users who want to edit and mix on the go. The M Box 2 Micro seeks to fill that gap. 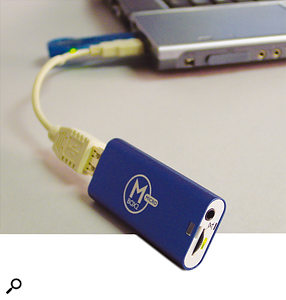 Since the launch of the Digi 001 back in 1999, the LE range of projectstudio equipment has become a major strand in Digidesign's Pro Tools universe. The LE range has grown steadily, encompassing everything from the simple M Box 2 Mini USB interface to the likes of the 003, which has enough I/O to record bands and multimiked drum kits. Further options were opened up by the 2005 launch of Pro Tools MPowered, which can work with any of a huge number of PCI, USB and Firewire interfaces from MAudio.

However, one thing has always been lacking from the Pro Tools world. There are lots of people who want to use Pro Tools on a laptop for editing and mixing, but have no need to record audio in their portable rigs. To those users, even the smallest M Box interface represents an inconvenience, not to mention a drain on precious battery resources. I can't be the only Pro Tools user to have cast an envious eye in the direction of PCMCIA interfaces like the Echo Indigo, which add a highquality, lowlatency headphone output to your system — and nothing else. With no cables to plug in and no unwanted circuitry to drain your batteries, the only cost is a minimal increase in the footprint of your portable computer.

Mixing In The M Box

Well, Digidesign have finally produced an LE interface aimed at meeting these needs. The M Box 2 Micro has a refreshingly minimal feature set: it provides a headphone output with a thumbwheel volume control, and that's it. The Micro is a lightweight metal device about the length of a cigarette and perhaps four times as wide, and connects to your computer via a USB 1.1 connection. You can plug the Micro directly into a USB socket, but I imagine most people will use it with the bundled extension lead. This is about eight inches long, and holds the Micro firmly enough that you're unlikely to disconnect the two accidentally in normal use. For the purposes of streamlining your portable rig, it's not quite as nice as cardbased interfaces, which barely add to the profile of a computer, but it's understandable that Digidesign have taken this design route, as currently no card-slot format is sufficiently standard across all Mac and PC laptops.

Like all M Boxes, the Micro acts as a dongle for the bundled Pro Tools LE software, but if you want to use any additional plugins, you will likely need an iLok key as well. In the review model, the accompanying DVD contained an installer for Pro Tools LE v7.3 and a separate updater to v7.3.1. However, the Micro will ship with v7.4 (reviewed elsewhere in this issue) as soon as it's available, and anyone who doesn't find 7.4 in the box will be entitled to a free upgrade.

Pro Tools LE was happy to live alongside Pro Tools MPowered on my Windows machine, which made a nice change from the last time I tried this, several versions ago. It started up without mishap, recognised all my existing plugins, and generally worked exactly like you'd expect Pro Tools LE to work, although busy Sessions sometimes required higher buffer sizes to play back successfully with the LE/Micro combination than was the case in MPowered with my MAudio Firewire 1814. A graphical glitch which will be corrected by the v7.4 upgrade is that the I/O Setup and Hardware Setup dialogues appear to be talking to M Box Mini and not a Micro, but this caused no problems in use.

I got an uncomfortable surprise the first time I used the Micro, because there are no markings by or on the thumbwheel volume control, and nothing in the printed documentation to show which way round it works. I left it in the default position, and it took me about a tenth of a second to rip my headphones off in agony, because this thing is loud. It seems ironic that the Micro comes with a leaflet that details the terrifying health and safety hazards posed by such things as inedequate ventilation in the studio, but says nothing about the risk of exposure to high SPLs. That said, the Micro's robust output level will certainly be welcomed by those needing to work in noisy environments.

In terms of sound quality, there is plenty of detail and midrange punch on offer, although the Micro's headphone output was a little lacking in lowend weight with my Sony MDR 7509s. However, this is not an uncommon problem with headphones that have such a low (24Ohm) impedance, and the Micro sounded fine with an 80Ohmpair of Beyer DT250s, and other widely used headphone models.

The Micro comes with a neat protective cover that should prevent damage to the USB connector in transit.

Some of those Pro Tools users who have been asking for something like the Micro are working with 88 or 96 kHz Sessions in their HD rigs, and would love to be able to transfer them to a laptop for editing. Unfortunately, like Digi's other USB interfaces, the Micro is restricted to 44.1 and 48 kHz sample rates. It's true that USB 1.1 offers limited data bandwidth, but other manufacturers have managed to make outputonly USB 1.1 devices that run at 96kHz — including Digidesign's sister company MAudio.

I asked Digidesign about this, and they cited two reasons for the limitation. One is that, according to their own research, only 15 percent of existing Pro Tools users work at rates higher than 48kHz. The other is that the Micro's architecture and drivers are based on those of the existing M Boxes; support for higher rates would apparently have meant a complete redesign, and hence a much longer development period. Personally, I'd have thought that 15 percent of Digi's user base was a large enough cohort to be worth taking notice of, but I'm not running the company.

A related question is whether the Micro offers good value for money. Your #182 gets you a copy of the Pro Tools LE software as well as the Micro itself, which is fair enough if you don't already have it. However, as their own research suggests, Digi must be aware that the likely market for the Micro is greatest among existing Pro Tools users (after all, if it was your only Pro Tools interface, you wouldn't be able to do any audio recording). True, buying the Micro will save you the cost of upgrading your LE rig to the latest version 7.4, but even if you factor that in, it looks like a pricey buy for those who already have an LE system. For not very much more money, you could buy an MAudio Transit USB interface and a copy of Pro Tools MPowered, giving you 96kHz playback, an audio input and a digital output in a package not much larger than the Micro. You'd also be free to add other MAudio hardware into the mix as and when you needed it, without forking out for another copy of Pro Tools. The cruel thing is that this approach is an option only for those who don't need the DV Toolkit — who are probably those most likely to want the 96kHz support.

Grumbles aside, though, the M Box 2 Micro does what it sets out to do. If you need to take your Pro Tools Sessions on the road for mixing and editing, it makes the footprint of your system significantly smaller. Job done.

The M Box 2 Micro is a product that many Digidesign users have been waiting a long time for, and as long as you don't need to work at high sample rates it offers a neat way of downsizing your Pro Tools rig for the road.