The original BM5A monitor speakers proved very popular in project studios, and Dynaudio claim to have made significant improvements in their successors. 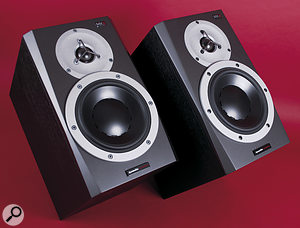 It's a decade, more or less, since I first tried a pair of Dynaudio's BM5 nearfield speakers. That original, passive design was Dynaudio's entry‑level nearfield monitor at the time, and although I had some criticisms, I found them better than much of the competition, and got on with them rather well. The BM5 design underwent a significant makeover when Dynaudio developed an active version, the BM5A. Reviewing that model back in SOS June 2005 (/sos/jun05/articles/dynaudiobm5.htm), Phil Ward was enthusiastic: "The BM5A is a high‑quality professional product that is unlikely to disappoint. Worth the extra expenditure compared with apparently similar entry‑level products.” Since then, however, there's been a flood of competition at the same price point, from the likes of Focal, Genelec, Adam, Sonodyne, Prodipe and Mackie, to name‑check only some of the competition. So, when I learned that the BM5A had been updated, I was keen to find out what improvements the BM5A MkIIs offered — and indeed how they compared with my existing nearfield monitoring system.

Outwardly, the BM5A MkII appears almost identical to the earlier active model, with everything housed in a sturdy rear‑ported cabinet, with a heat sink on the rear for the internal amp, and chiselled good looks courtesy of the angled corners on the front.

Dynaudio have changed several features, though, which they claim combine to make these speakers "louder, clearer and more accurate than ever”. They also suggest that "with the BM5A MKII [we can] expect better monitoring across the entire frequency range.” In particular, they say that the bass end is both louder and more accurate than in the previous design, which suggests that they've been listening to customer feedback, as that was one (albeit gentle) criticism that I've seen several customers make of the original BM5A.

The business end of each BM5A MkII is based around a handmade seven‑inch aluminium woofer and a new soft‑dome tweeter. The waveguide around the tweeter is new, too. As the name implies, this device is intended to match the angular dispersion of the tweeter to that of the woofer at the crossover frequency.

Driving the tweeter and woofer is a two‑channel 90W amplifier (that's the peak figure — it's 50W RMS). On paper at least, these speakers are capable of putting out a peak level of 117dB SPL at one metre, which is pretty good for a speaker of this size and certainly far more than you're ever going to need from a nearfield system, particularly in a typical home or project studio. It's nice to know it's there in reserve though!

The audio inputs are on balanced XLRs, presented on the rear panel, where you'll also find the IEC mains power inlet and three analogue filters so that you can tune the speakers to the room and their position within it. These filters offer high (±1dB) and low (±2dB) shelves, and a broad mid-cut of 1, 2 or 4 dB — and if you want a slight mid boost, of course, you can cut with the LF and HF filters and raise the overall level. In my own studio, I found that the speakers sounded best when all three filters were set flat, but such controls are often needed to compensate for placement relative to walls and corners, where the boundary effect causes a build‑up of bass energy, and to accommodate the tastes of individual listeners. As the speakers are rear‑ported, it's also best to leave a few inches of space between them and the wall behind to allow the ports to function correctly. Another option for tightening or reducing the bass output for use in small or problematic rooms would be to stuff acoustic foam — or, if you must, a pair of socks — in the port at the back, though that is a little unscientific! 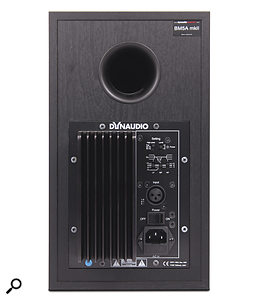 I fired up the BM5A MkIIs alongside my own nearfields: a pair of Dynaudio's more expensive, albeit rather longer‑in‑the‑tooth, passive M1 speakers, powered by an MC2‑designed Dynaudio DCA650 power amp. Both sets of monitors were fed from my DAW via a Dangerous D‑Box monitor controller, so that I could switch between the two pairs of speakers instantly, while using the same D-A converters.

I then spent a pleasant afternoon listening to a range of familiar pop, rock, electronica, hip‑hop, jazz and classical material, as well as firing up the busy multitrack rock/pop mix that I happened to be working on at the time, and the details of which were becoming almost painfully familiar! At first, I listened to the BM5A MkIIs on their own — just to get used to their sound and make some notes on my first impressions — and subsequently switched between the two different monitoring setups. (It really is one of life's joys to being able to describe the speaker‑auditioning process as 'work'!)

My first impression of the BM5A MkII's sonic performance was positive. They sounded nice and clean, reasonably neutral — though perhaps a hint 'forward' at the top end — and very smooth. In short, they were impressive for a speaker at this sort of price, and happily, the good impression didn't change for the worse with repeated listening. The stereo image seemed stable, which is probably due in part to those new waveguides — though of course that's often a quality which has as much to do with the room as it does with the speakers themselves. There was good detail in the bass end, too, which felt nice and tight in the time‑domain, with little audible bass overhang or smearing. Importantly, the bass in context of the overall level felt about right to me, which suggests that Dynaudio met one of their design aims.

I tried cranking the level up to see whether my ears or the speakers would give up first, and my ears lost that fight: as the stats suggest, there's more than enough level available, and at realistic monitoring volumes there was no audible distortion. They seemed impressively quiet too, with none of the background hiss or hum that I've heard on a few monitor designs (even from otherwise reputable manufacturers).

Introducing the M1s to the session and firing up that mix — which had electric, electronic and acoustic instruments as well as vocals and plenty of percussion — I began to notice a few differences. The BM5A MkIIs were definitely slightly silkier‑sounding at the high end, and the bass end was fuller — and I mean that in a good way. I would probably be happy to mix on these speakers for longer periods of time without a break than I would on the M1s. That said, comparing the two made the mid‑range detail of the BM5A MkII seem slightly less impressive. The M1s sounded almost forensic in the mid‑range. Back on the plus side, though, the BM5A MkII's high frequencies were equally crisp and clear, but also somehow less fatiguing on the ear, which suggests a lower distortion figure.

Perhaps the most pleasing aspect of the BM5A MkII to my ears was the bass end. My M1s always sound a little lacking in that department when not used in conjunction with a subwoofer — and I really wouldn't recommend most home‑studio users investing in a sub, simply because most domestic rooms aren't able to cope with all that extra bass bouncing around the monitoring environment. By contrast, the BM5A MkII was both full‑sounding, yet tight and smooth. It reproduced reasonably faithfully synth, acoustic and electric bass parts, as well as kick drums and the lower registers of pianos and organs. If you really do want to increase the bass extension, Dynaudio's BM9S or BM10s subwoofers should prove to be the perfect partner(s).

On balance, then, the BM5A MkII coped admirably with a wide range of material. They still have the familiar Dynaudio character, which I'd characterise as clean, tightly controlled and slightly 'presumptuous' or 'forward' at the high end — which is what many studio engineers have come to expect from a monitor. A quick check against my more 'polite' KEF hi‑fi speakers confirmed that.

They're sufficiently revealing in the mid‑range, where difficult‑to‑mix elements such as vocals and guitar tend to reside, enabling you to listen to the details of a mix and make the right decisions. The bass end is a tangible improvement on previous BM5 designs, too. And while it's clear from the comparison with the M1s that more money can buy you still more detail and separation, I don't think that you could get much better for the same money.

What this all boils down to is that I'd be more than happy to mix on these monitors. They may not be 'cheap' exactly, but they're well worth the asking price — and if you find that you can't mix on a pair of BM5A MkIIs, I'd suggest that you think about upgrading your room acoustics!

The alternatives for small‑studio monitoring at this price point are too numerous to list comprehensively. If you want to evaluate other models, among those you should consider are similarly priced models from Genelec, Mackie, Focal, Adam, Sonodyne, Prodipe, KRK and Blue Sky.

Dynaudio have come up with yet another good‑sounding and highly capable nearfield monitor for small‑studio use. It's an improvement on the previous BM5A MkII, and a wonderful speaker for the size and budget. If you can't make good mixes on these speakers, then it's not the speakers you need to upgrade!