Edirol's first foray into Firewire audio is a compact 10-in, 10-out device with microphone preamps, S/PDIF and MIDI.

When Edirol released the world's first professional USB 2.0 audio interface late last year in the form of the UA1000, I remember thinking that it wouldn't be long until this newer, higher-bandwidth format found its way down to the more affordable end of their range. That may still happen, but for the moment at least, the company have gone with the majority consensus and produced a Firewire device: the FA101. Numerous reasons could account for this decision, but perhaps the most obvious clue might be that whilst the UA1000 still does not work on the Mac platform, the FA101 comes with native OS X Core Audio support from the word go. Users of either platform will need a reasonably up-to-date system, however: versions of Windows prior to XP are not supported, whereas Mac users need to be running OS 10.3.4, or 10.3.3 with the Firewire audio update from Apple.

The FA101 boasts 10 inputs and 10 outputs, crammed with little space to spare into an attractive, metallic red half-rack casing. With a front-panel template clearly derived from Edirol's UA5 USB 1.1 interface, among the first things that come to the attention are the twin Neutrik combo sockets for the microphone preamps on inputs 1 and 2. These can supply 40dB of gain along with +48V phantom power if required, and the second input is also equipped with a high-impedance option for DI'ing electric instruments. Three further analogue input pairs with balanced jack connectors are present on the unit's rear, with channels 7 and 8 providing adjustable input sensitivity between -10 and +4 dBu via a small knob placed alongside. All eight analogue outputs are also provided on balanced jacks with nominal levels of +4dBu.

Further items of interest include the usual MIDI I/O pair, a headphone socket and associated volume control, two Firewire ports, and a small raft of controls related to monitoring and clocking, which I'll come to shortly. Metering for both the combo jack inputs and the main output pair is served by four LEDs — three green and a red clip indicator — below which lurk a pair of Toslink optical connectors for S/PDIF I/O on channels 9/10.

As befits something with the potential to be dragged from the confines of the studio, the FA101 is capable of being powered via the Firewire buss when connected to computers with a suitable six-pin port. Many PC laptops ship with the four-pin variety — also known as iLink or DVLink — and will require the unit be powered with the supplied AC adaptor brick. It's also worth noting that PCMCIA Firewire adaptors, such as the one I was using for this review, are not able to supply buss power despite generally employing six-pin connectors. Either way, one-metre-long cables of both types are supplied with the FA101, so you won't get stuck with the wrong one.

The FA101 scores over some of its competitors by having 10 individual analogue outputs, though it lacks the sophisticated monitor mixing capabilities of Edirol's own UA1000.Photo: Mark Ewing

The FA101's installation procedure isn't the most elegant I've seen, but Edirol have done a good job in making it pretty foolproof for the user. They also seem unduly concerned that we temporarily configure Windows XP's hardware settings to ignore the installation of 'unsigned' drivers, perhaps because seeing Microsoft's apocalyptic warning message more than once might perturb users not already accustomed to ignoring it.

After running the driver setup program (the supplied version 1.00 was the most recent at the time of writing) you're presented with a checklist of steps to run through, starting with plugging in and powering up the device. Windows then detects and (hopefully) installs the driver components FA101 'Sub 1' and 'Sub 2', with the 'Install Automatically' option taking care of things at the New Hardware Found prompt. You can then dismiss the setup program, after which the prompt appears for a third and final time, to install the FA101 proper. It sounds a little long-winded, but there's not much the user can do wrong, providing nothing untoward happens during the process.

Once installed, the FA101 makes its presence felt in a pretty minimal way, with a single entry appearing in Windows' System Hardware applet, and a new link added to the Control Panel for opening the device's somewhat sparse driver settings dialogue. The 10 input and output channels appear straightforwardly as stereo pairs 1 to 5, and the unit doesn't bother making itself the default playback device for system sounds and standard Windows applications.

As with several of the company's other Audio Capture products, Edirol have taken a 'hard-wired' approach to the FA101's digital clocking, with a sample-rate selector knob and external sync button adorning its front panel. This approach has its down sides, chiefly the fact that it's not possible for software applications like Cubase or Sonar to automatically switch the unit's sample rate as required on the fly. Instead you must quit all your software applications, set the knob to the desired position, and cycle the unit's power using the tiny switch located on its rear. Rebooting the FA101 is also necessary each time you change the buffer size setting, so if this is something you're likely to do on a regular basis you might want to think twice about shoving it in a rack. Another little inconvenience for impatient types is that this procedure tends to make Windows XP rather unresponsive while it reinitialises the FA101's drivers — on my PC this took about a minute or so before things could get going again.

The FA101 caters for five sample-rate settings between 44.1kHz and 192kHz, with unrestricted 10-in, 10-out performance available at up to 24-bit, 96kHz. Unlike Edirol's UA1000, which offers only a single stereo output at 192kHz, the FA101 provides six-in, six-out capability, with the additional caveats that you lose the output level metering and input monitoring on all but the first two channels. I suspect that not too many people will use the FA101 at this super-high sampling rate, but it's always good to have compatibility with those just-around-the-corner formats we've been hearing about for years now.

One commonplace software component Edirol haven't provided is a utility for controlling the FA101's onboard monitor mixer, though users on the Windows platform can take advantage of the 'Soft Ctrl' feature, which enables applications that support ASIO 2.0 Direct Monitoring to control the level and pan of each monitor signal independently before they are fed to outputs 1/2 and the headphones. Routing monitor signals to busses other than the main stereo output can't be done, however.

With the Soft Ctrl function disabled, rough-and-ready monitoring is possible with each channel either hard-panned or in mono, with a single Mix knob determining the overall level. The Mix knob is actually a rather unusual design, with the left side of the centre detent controlling the level of the input monitor signal and the right side that of the main output, making it easier to achieve a good relative balance without having to do any fiddling about with faders in software.

Overall, whilst the monitoring facilities allow reasonable flexibility depending on the specific host application used, a dedicated monitor mixer would undoubtedly have made better use of the FA101's 10-in, 10-out potential, and I missed the ability to define a number of preset configurations for different gear setups. That said, I was using version 1.00 of the device's software, so there's still a glimmer of hope that Edirol will come up with something like the Control Panel mixer supplied with their UA1000. 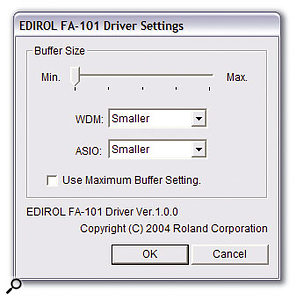 The FA101's software side is pretty minimal, with just a simple driver settings panel for adjusting the ASIO and WDM buffer size.Photo: Mark EwingThe FA101's ASIO driver defaults to an overall latency of roughly 20 milliseconds at 44.1kHz, with equal-sized 440-sample buffers on both the input and output. Edirol's driver control panel is about as vague as can be with the specifics, providing 'larger', 'normal' and 'smaller' settings along with an unmarked five-position slider for the buffer size. In practice, this allows for a minimum of 104 samples each way, equating to a pretty handy 5 millisecond latency at 44.1kHz for the purpose of monitoring via your host application, or half that for soft-synth use.

Performance was very respectable on my 1.6GHz Pentium 4-M laptop. With the smallest 104-sample buffer size, Cubase SX 2 provided solid performance until CPU usage drifted over about 50 percent, at which point clicks and pops would begin creeping in. This nonetheless made for reliable glitch-free tracking whilst monitoring through VST or Direct X effects, providing certain rather demanding plug-ins (like Izotope's Spectron, for example) were steered clear of. At higher latency settings, the FA101 provided ASIO performance that matched or slightly bettered my trusty Echo Layla 24 and Indigo PCMCIA interfaces in terms of CPU efficiency.

Running Cakewalk's Sonar 3.1.1 with the FA101's WDM drivers also turned in good results. With the WDM buffer set to its smallest setting the program reported a mixing latency of just 1.1 milliseconds, and played back a simple test song with no problems other than the anticipated huge increase in CPU consumption. For general usage, a 4 millisecond mixing latency provided a decent balance of speed and stability on my hardware — performance which helped make up for the fact that users of Sonar are stuck with the FA101's rather basic hardware-controlled monitoring capabilities unless they monitor through the computer.

Breaking out the indispensable Rightmark Audio Analyser and hooking up a loop-back connection on the FA101's first I/O pair produced some quite impressive results. Noise levels at 16-bit, 44.1kHz measured a steady -96.1dB(A), which at 24-bit decreased to a very respectable -102.3dB(A), tallying precisely with the figures cited by Edirol. The preamp-less inputs 3 to 8 were even better, averaging -103.9dB(A), whilst harmonic distortion of 0.004 percent and a very flat frequency response of about +0.18, -0.06 dB from 40Hz to 15kHz shouldn't draw any complaints either. In subjective listening tests, this certainly seemed to translate into audio quality that compared very favourably with my Layla 24, with a clean, open sound and good stereo imaging.

Since manufacturers are just starting to provide Firewire devices at the more affordable end of the market, it's not surprising that the FA101 undercuts everything else for the number of inputs and outputs it provides. To a certain extent, it looks like Edirol have had to make some sacrifices to reach this price point, because the FA101's routing and monitoring facilities lack the flexibility generally found in more costly multi-channel interfaces.

At the time of writing, the Edirol's stiffest competition looks set to come from M-Audio's newly released Firewire 1814, which, though equipped with fewer analogue outputs, does include such niceties as work clock and ADAT I/O. Yet although desktop users not averse to installing PCI cards have a lot more choice available to them, the FA101 still compares well on price with a number of similarly specified PCI-format products, including Edirol's own DA2496 and M-Audio's Delta 1010. Despite a couple of inconveniences, the FA101 is a tremendously capable device, and one that I'd be happy to use as my main audio interface. Versatile analogue connectivity and a very compact format make it well equipped for use outside the studio, whilst no-compromise 24-bit, 96kHz operation and good low-latency performance mean it'll be able to handle most demanding recording applications with ease. All in all, Edirol's first Firewire product is a strong contender, and one that deserves to sell extremely well.