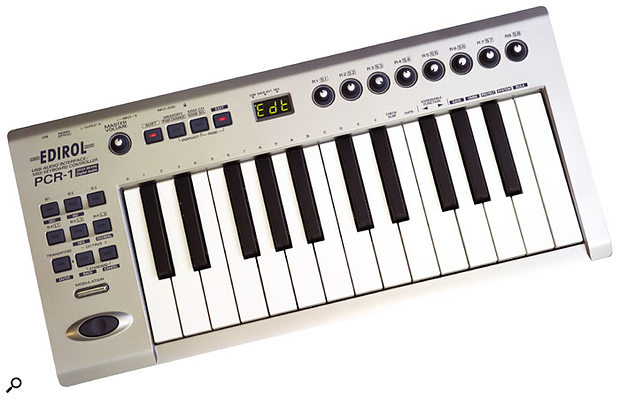 There's been fierce competition over the past couple of years to create the ultimate portable MIDI controller for use with laptops. Edirol's PCR1 is one of the lightest and thinnest yet seen. Is it what we've all been waiting for?

It must say something about the music-technology scene (or me) that when I visited the UK Sounds Expo show earlier this year, the two things that most interested me could be mistaken for toys! One was the Korg Legacy Collection, or specifically the diminutive controller keyboard that comes with it, and the other was the Edirol PCR1, which, at first glance, looked as though someone had sunk a portable controller keyboard halfway into a desk! The PCR1 is very slim (just 40mm high, including the knobs, at its thickest point), with similar dimensions to a standard computer keyboard. In fact, it's very much a computer peripheral, designed to be an input device for software synths and MIDI software, and adding audio I/O. This emphasis away from the traditional MIDI controller keyboard is particularly evidenced by the lack of standard five-pin MIDI connections, or even a power supply. Instead, all power and communication is handled via the USB connection to the computer.

In their attempt to create a really small and portable controller, Edirol have looked at every aspect of the physical design. In addition to the main housing, the keys, knobs, buttons and pitch/mod controllers have all been rethought to minimise size, and to withstand the rigours of travel. The keys feature a new mechanism that Edirol have given the highly contrived acronym SLIM, which (they claim) stands for Short-stroke Low-profile Impact Mechanism. The keys have about half the normal travel, allowing the keyboard to fit into such a small space. Despite this, the keys have standard width, and normal velocity sensitivity. The keyboard doesn't generate aftertouch, but you can set one of the top-panel knobs to stand in for this. The keys take some getting used to, and may not be for everyone, but should be an acceptable compromise for those who are not traditional keyboard players. In fact, for playing percussive instruments like drum machines, you may even prefer them.

This side view shows just how thin the PCR1 really is — it's just 40mm at its thickest point.Photo: Mark Ewing

The knobs also have a low profile, but although they are small, and squeezed into a small space, they are cleverly shaped, with a small diameter that allows enough space between them for your fingers. I liked the buttons, which are a made from rubber and reminiscent of those on Sinclair's ZX Spectrum. Although you might think this gives the PCR1 a bit of a calculator-like feel, I much preferred them to typical clunky plastic buttons.

The last innovation is the one that doesn't work so well for me: the concept for the pitch and mod controllers. The Edirol PCR1 does away completely with the usual joystick or wheel controllers. Instead, the pitch controller is an oval rubber pad, while the modulation controller looks like a small metal rod sunk into the PCR1's top panel. These both seemed like excellent ideas until I realised that they weren't quite what I was expecting. Each controller really just consists of Up and Down buttons, and you have to specify the speed at which they operate as part of the unit's preference settings. I really didn't get on with this method, and I don't think there's any substitute for 'real' controls for these parameters.

Let There Be Audio

In addition to being a controller, the PCR1 doubles up as an audio interface, capable of 24-bit/96kHz operation. The stereo analogue inputs and outputs are on RCA phono connectors, and there's also a mini-jack headphone output. Communication with the host computer is taken care of by the same USB cable that the controller side uses. A wide range of host systems are supported: WDM, MME and ASIO 2.0 on Windows 98/2000/XP, ASIO/OMS on Mac OS 9, and Core Audio/Core MIDI on Mac OS X. I was testing on OS X, so after installing the drivers I went into the Mac's Audio MIDI Setup control panel, and confirmed that the unit was being 'seen' as both a MIDI controller and audio interface. At this point I jumped straight into Propellerhead's Reason to have a play.

In Reason 's Preferences, the PCR1 was seen as two separate MIDI devices, because the controller's USB connection is divided into two virtual ports. This provides a degree of flexibility when setting up your controller templates, allowing you to output different controls via different MIDI ports. I was also able to assign Reason 's audio output to the PCR1's, but noticed straight away that the Latency slider was displaying a very high value. For a while I couldn't understand why there was a consistent overhead of 38ms latency over that of the Mac's built-in audio outputs at any given buffer size. What I hadn't noticed at this point was that the installer CD adds a specific PCR1 control panel to the system prefs, which has its own buffer setting with a very high default value. By reducing this buffer considerably, I could match the kind of latency I'm used to getting when using my Mac's own headphone output, but audio performance was considerably reduced. This was a pretty harsh compromise, so I was keen to get back to my Mac's headphone socket as soon as possible. That said, of course Apple have not seen fit to put an audio input on my iBook, so the PCR1's audio connections would come in very useful for recording on the road, or whenever a grander audio interface was not available. A limitation is that the audio inputs are only line-level inputs, so they cannot take the signal from a mic or guitar. An impressive inclusion, however, is the fact that the headphone output doubles up as an optical digital out, the same as you find on some Sony Minidisc products.

All the PCR1's MIDI (and audio) interfacing is handled via its USB connection — there are no five-pin MIDI sockets at all. The remaining features on the unlabelled back panel are: (left-right) the display contrast control, the stereo analogue ins and outs on phono jacks, and the mini-jack headphone output.Photo: Mark Ewing

While the audio side of the PCR1 is fairly basic, the MIDI controller role is clearly the more developed side of the product, and you can feel the Roland heritage backing it up. The manual is clear and accessible, and should get even a MIDI control novice up and running quickly. 16 memory slots are available for storing control assignment sets, and these come stocked with various pre-programmed templates.

The factory templates are mostly aimed at controlling the popular sequencer packages, but you can use the memory slots to store your own settings, and set the unit up to control any MIDI-capable software or device connected to the computer. Two sets of card overlays are provided, one printed and one blank. It's a bonus that they are included, but they are a bit annoying as they don't sit securely on the panel, and get knocked around when you use the controls. Although there are eight physical knobs available, a Shift button gives access to a second bank of controls. Most of the time the unit defaults to Play mode, where all the controls transmit their current parameters, and the keyboard sends Note messages. The two other transmission modes are 'Bank Sel', and 'Prg Change', which are used for selecting sounds on the destination device. Other modes are available for changing settings, editing control assignments, and loading memory sets. Like M-Audio's Oxygen/Ozone controllers, the main keyboard is used for numeric entry in these modes.

As well as all the basic control possibilities, there are various other options available, such as an all notes off Panic command, and my favourite, the MIDI Clock output option. This last trick allows you to transmit Beat Clock from either of the two virtual MIDI ports, and assign one of the knobs to control the tempo. This is excellent for live situations and laptop DJ sets, and it worked perfectly in Ableton Live. Finally, there is a Snapshot command, which transmits the current position of all the controllers to the destination, so all controls become 'in sync'.

Editing the functions to which the controls are assigned is quite easy, and follows the model of entering Edit mode and moving or pressing the control you wish to program. There is a comprehensive list of MIDI message types available in addition to the standard CC (Control Change). The full list is note, aftertouch, CC, program change, RPN, NRPN, SysEx, and tempo change, which makes the PCR1 considerably more versatile than many of its rivals. A nice idea is that there are Basic and Advanced edit modes, which have different numbers of parameters you need to set for each controller. Buttons can be set to Latch or Toggle mode — with corresponding LED behaviour. The knobs can have their range adjusted, and can be switched between transmitting absolute values and emulating a rotary encoder. This is a clever idea that I've not seen before. To help me understand this, I set one of the knobs to this mode and assigned it to a pan pot in Ableton's Live. When you turn the knob to the right and stop, the panner in Live moves right continuously until you return the knob back to the 12 o'clock position. Moving the knob further away from the centre results in a faster movement in Live. Unfortunately, there isn't a 'pick-up' mode, where the controller only starts operating when it passes through the current value on the destination device.

If hands-on control editing sounds like a lot of hard work, you can turn to the cross-platform PCR editor software. This utility displays a graphical representation of all the available hardware controls. Clicking a knob or button opens another window with drop-down menus and numerical fields for settting up the control. Once you've entered all the values, you transmit the patch to your PCR1. Simple as that. Even if you don't use the editor for setting up the PCR1, the software is the easiest way to manage all your banks, as each setup can be saved as a document for later loading.

As you can probably surmise, I'm really impressed with the PCR1's comprehensive MIDI control abilities, and this is what you should concentrate on when considering going for this controller keyboard. The audio interface is a useful addition, especially the digital out, but is quite limited and should be looked on as a bonus to the MIDI side. The lack of mic or instrument input capability means that the PCR1 is not a 'one-stop shop' like some of its competition, but then this is reflected in the price. What the PCR1 really excels at, of course, is portability — the audio connections will be a welcome extra outside the studio, and Edirol have even thrown in a padded cloth 'gig bag' in the box. The amazing compactness, and touches like the beat clock/tempo controller, make this an obvious piece of kit to pack for a live laptop performance.

Innovative design makes this the sexiest and most portable of the mini keyboard controllers. The PCR1 has a minimal audio interface, and lacks normal pitch and mod controllers, but its size and excellent MIDI implementation give it its own distinct appeal.