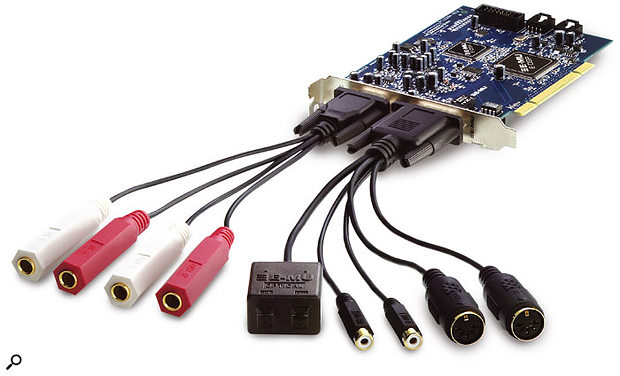 Emu have already taken the market by storm with their range of affordable, high-performance soundcards, and their new stereo PCI card offers impressive features and audio specifications at a budget price.

Joining the excellent 1212M, 1820 and 1820M in Emu's soundcard range, the new 0404 is also a PCI card, and features the same E-DSP chip capable of running up to 16 DSP effects simultaneously. The 0404 boasts stereo analogue inputs and outputs, plus both co-axial and optical S/PDIF digital input and output, and a MIDI input and output, for an amazingly low UK price of just £69.99. This time the analogue I/O is unbalanced, but the software bundle seems to be exactly the same as for the 1212M, consisting of Steinberg's Cubasis and Wavelab Lite, the Sound Guy's SFX Machine LT effects plug-in, and a trial version of Minnetonka's Discwelder Bronze DVD-Audio burning application, plus the same Patchmix DSP utility software as the rest of the range. Once again this product is currently for PC users only, and runs either on Windows 2000 or XP.

All the 0404's circuitry, including the Burr-Brown PCM1820 ADC and AKM AK4395 DAC chips, is on a single PCI card. Both converter chips are 192kHz-capable, but only 44.1, 48 and 96 kHz sample rates are supported here, although at this price I don't see this as much of a restriction. As on the other Emu soundcards, the mysterious Xcard In and Out connectors are present for rumoured multi-card support, as well as a Sync socket so you can attach the optional Sync daughterboard via an internal ribbon connector to add word clock in and out, SMPTE in and out, and MTC (MIDI timecode) out. I suspect these functions will be overkill for the majority of potential 0404 users, but it's a welcome upgrade option.

All I/O is on flying breakout cables, with the audio emerging from a nine-pin D-type connector to four quarter-inch unbalanced in-line jack sockets, and the digital I/O using a separate 15-pin D-type connector terminating in two in-line phono sockets for co-axial S/DPIF, a tiny in-line box with two Toslink optical sockets, and two in-line five-pin DIN MIDI sockets. As its 0404 nomenclature suggests, both S/PDIF inputs and outputs carry the same signal, so you can record and play back up to two mono analogue and two digital signals simultaneously.

Installation of the 0404 drivers and Patchmix DSP software went without a hitch, although for any existing Emu users who are wondering, you can't use the 0404 alongside a 1212M, 1820 or 1820M, since the drivers in each case look for their specific hardware and don't currently support multiple cards. However, although the 0404 Patchmix DSP software seems tweaked to only look for the 0404 card, it's functionally identical to the version supplied with Emu's other, more expensive cards, with exactly the same selection of 32-bit DSP effects that run at either 44.1 or 48 kHz (but are disabled at 96kHz), and once again there is no hidden sample-rate conversion going on behind the scenes. 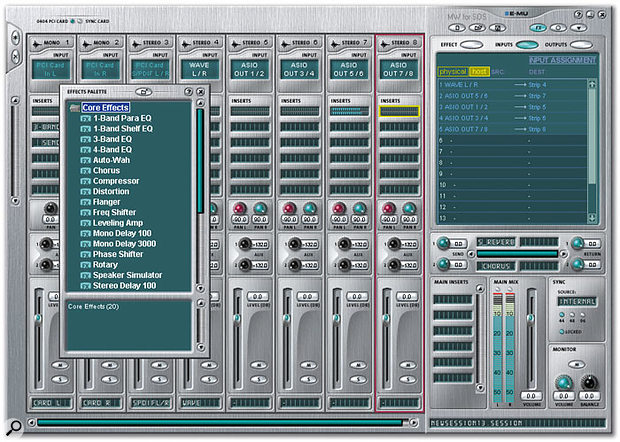 Emu's 0404 has the same multi-channel DSP mixer and effects as its more expensive cousins.

Since I devoted so much space to explaining the ins and outs of the Patchmix DSP software in my extensive review of the 1820M in SOS June 2004 I won't repeat myself here, except to reassure new users that while it may seem impenetrable at first, loading in the various Session templates should soon make things clearer.

Running my audio tests using Rightmark's Audio Analyser v5.3, the 0404 turned in a truly superb performance for a £69.99 soundcard, with a frequency response that was +0.14/-0.13dB from 20Hz to 20kHz, and total harmonic distortion of just 0.002 percent. However, it's the dynamic range measurements that are most remarkable: at an astonishing 112dBA, this is an amazing 16dB better than M-Audio's Audiophile 2496, 12dB better than the M-Audio Firewire 410, and 4dB better than Echo's Mia. Only when you compare it with Emu's own 1212M and 1820M do its results fall behind by about 6dB.

Of course background noise levels aren't the whole story, and in listening tests the differences between the 0404 and my benchmark Echo Mia were extremely subtle, whereas to my ears the 1820M was noticeably more clear and focused. However, given that Echo's Mia MIDI currently sells for about £160, and apart from its balanced I/O provides roughly the same features as the 0404 minus the DSP effects, this is still an excellent result.

Emu's ASIO drivers once again worked very well inside Cubase down to latencies of 4ms on my PC at 44.1kHz, and I managed a very good 10ms Play Ahead setting with NI's Pro 53 soft synth using the Direct Sound drivers, and the usual indifferent Windows XP result of 45ms with the MME ones. Also, although I read claims on a web forum that Emu's drivers aren't yet multi-client, I had no problems running the MME-WDM drivers and ASIO ones simultaneously with different applications, or allocating different pairs of ASIO drivers to multiple applications. Like the 1010 PCI card of the more expensive Emu cards, the 0404 also supports up to 32 ASIO inputs and outputs, so you can mix down the outputs from these multiple applications internally using the Patchmix DSP utility and route them all to the 0404's stereo analogue or digital I/O. On the minus side, while the ASIO drivers can be used at 44.1, 48 and 96 kHz, Emu still haven't released MME-WDM drivers for any of their range that support 96 kHz sample rates, and using Gigastudio isn't an option either, since there are no GSIF drivers at present.

Cream Of The Crop

At this price and with this spec I suspect most other soundcard manufacturers will have shed a few tears behind the scenes when Emu released the 0404. I can't think of a single alternative at a similar price that provides remotely similar functions and performance. In fact, I suspect the 0404 may tempt some potential purchasers away from Emu's own 1212M model, which is more than double the price, since the 0404 provides exactly the same DSP effects and versatile Patchmix DSP mixer. So what compromises would there be?

Well, you lose the balanced analogue inputs and outputs (which, as many musicians are finding, can help solve a lot of ground loop problems when connecting to other mains-powered gear), the Firewire port, ADAT functions and 192kHz sample-rate support. Also, while you do still have the Sync board as an option, for the time being at least the excellent Emulator X soft sampler isn't compatible with the 0404, and without GSIF driver support you can't use Gigastudio either, leaving Halion, Mach V or Kontakt as the only real soft-sampling options. However, as long as you're happy with unbalanced analogue I/O and don't need more than two analogue ins and outs, there simply isn't anything available to my knowledge that provides such professional-sounding audio at this price. Emu have done it again!

Emu's 0404 is absolutely stunning value for money at just £69.99, and with a dynamic range of 112dB it blows away most stereo soundcard competitors at double the price.